Wiesbaden's Dennis Ringgold catches the ball for a touchdown after Patch's Sean Rittenhouse failed to knock it down. (Joshua L. DeMotts/Stars and Stripes)

Wiesbaden's Dennis Ringgold catches the ball for a touchdown after Patch's Sean Rittenhouse failed to knock it down. (Joshua L. DeMotts/Stars and Stripes) Wiesbaden's Daniel Harris is pushed out of bounds by a Patch defender. (Joshua L. DeMotts/Stars and Stripes) 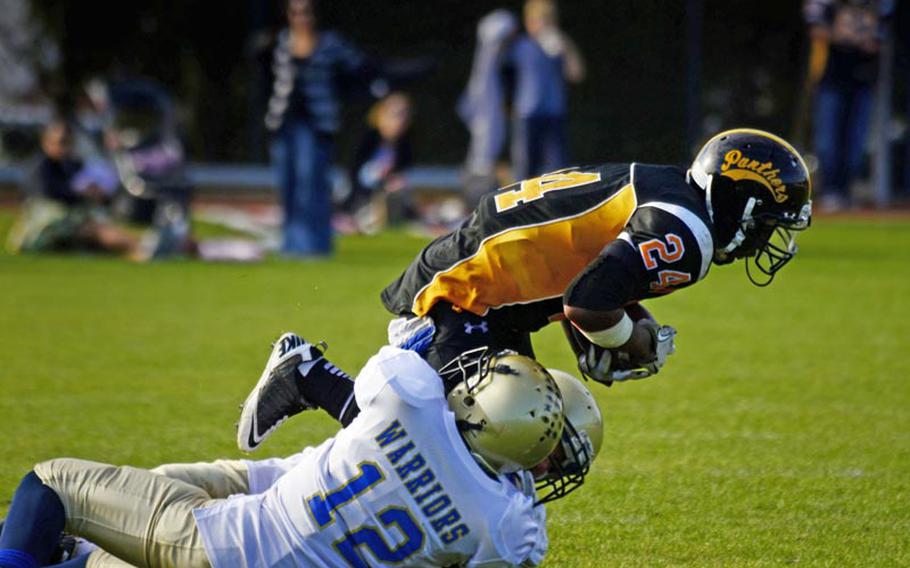 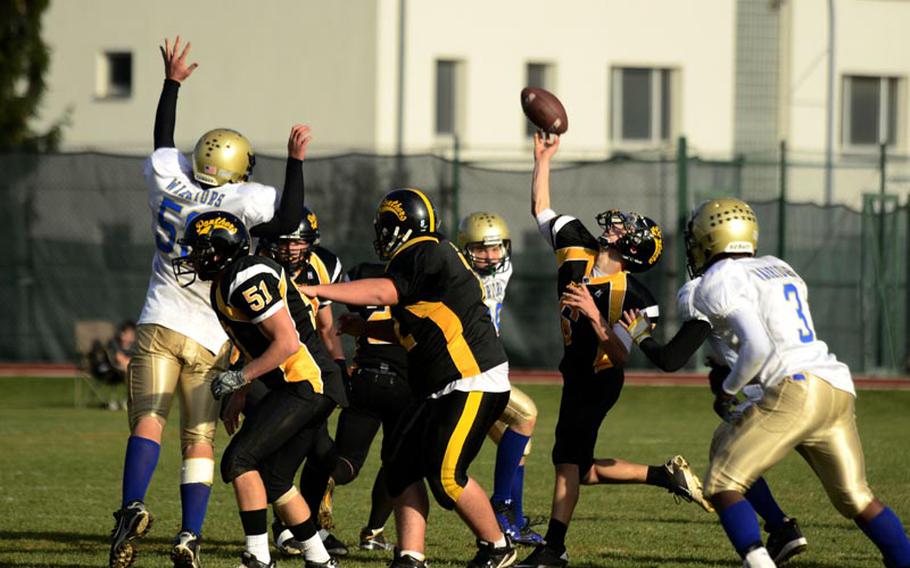 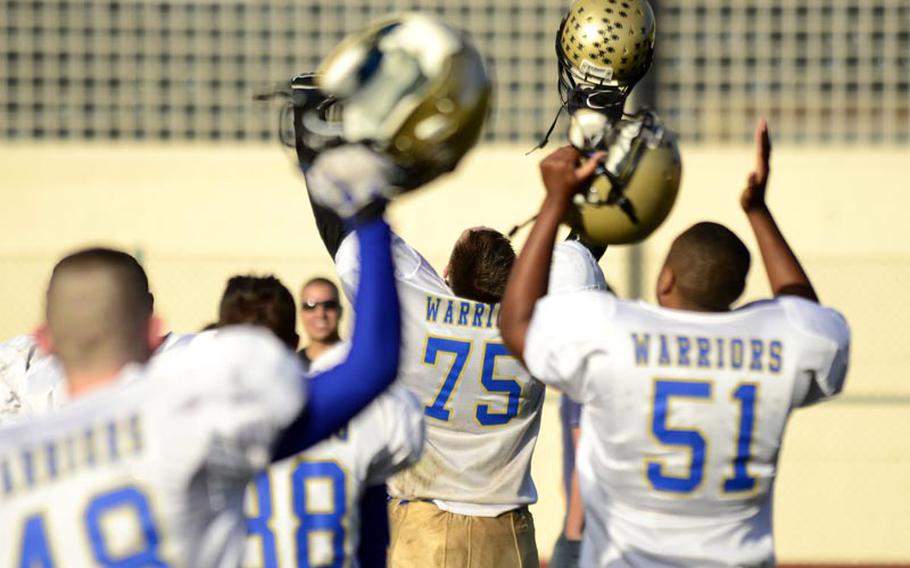 STUTTGART, Germany &ndash; Daniel Harris rushed for 175 yards and two touchdowns Saturday to help the Wiesbaden Warriors past the regular-season champion Patch Panthers, 21-17, in a European Division I semifinal game.

Harris, who made 10 tackles on defense, made his team&rsquo;s four-point lead stand up at game&rsquo;s end, Wiesbaden coach Steve Jewell said by telephone on Saturday, tackling Patch&rsquo;s Justin Johnson-Rich on a pass play that was bidding to result in Johnson-Rich&rsquo;s third TD catch of the day.

&ldquo;We were ahead 21-11, but Johnson-Rich broke a screen pass on fourth-and-forever for the score that made it 21-17. He caught another little swing pass after that, and I was saying, &lsquo;Here we go again,&rsquo; but Harris was in on defense and tackled him.&rdquo;

Jewell went on to praise Johnson-Rich, whom Patch coach Brian Hill credited with 132 receiving yards, which included TD catches which covered 72 and 24 yards, and 69 rushing yards.

Wiesbaden, which led 14-3 at the half on a run by Harris and a Garry Miskovsky-to-Dennis Ringgold pass, seemed to be comfortably ahead before Johnson-Rich got the Panthers to 14-11 with his first TD catch. Patch had scored before intermission on Sean Rittenhouse&rsquo;s 30-yard field goal.

Wiesbaden, however, responded when Dan Aslakson, who rushed just three times for 110 yards, broke an 86-yard run that carried to the Patch 6. Harris took what proved to be the deciding score in from there.

&ldquo;That play actually was the difference in the ball game,&rdquo; Jewell said.&rdquo;They were keying on Harris, and Dan broke the counter play.&rdquo;

Jalan Darby picked off one Miskovsky pass for a Patch defense which got 14 tackles from Ryan Frary, 7 stops from Rittenhouse and 6 more tackles from Darby.

Wiesbaden (5-2) moves on to Saturday&rsquo;s D-I title game against Ramstein; Patch finished its season 5-2 and the D-I regular season champion. The Panthers were playing Saturday for a shot at their first D-I title game in school history.

&ldquo;Our kids are excited about being back in the Super Six,&rdquo; Jewell said, referring to Saturday&rsquo;s championship tripleheader at Baumholder.