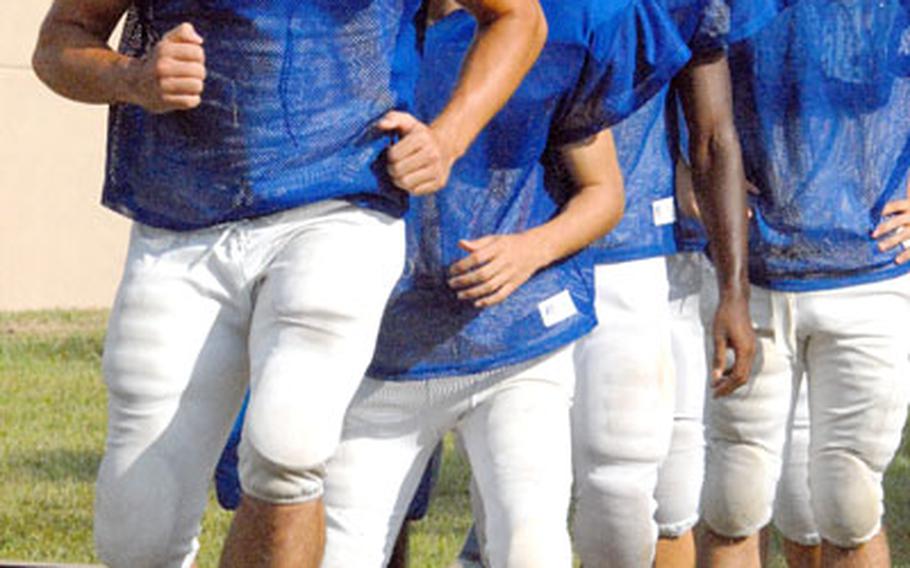 The same day in the Class A, Osan American Cougars rallied from a 14-0 deficit to edge Japan&#8217;s Robert D. Edgren in the title clash on Osan&#8217;s home field.

The victories raised the question: Is the Department of Defense Dependents Schools-Korea league, now in its fourth season, a rising gridiron power?

&#8220;We were excited to see that come about,&#8221; Cougars coach Tony Alvarado said Wednesday, &#8220;for Korea football to get that recognition &#8212; us winning Class A and Seoul American knocking off the supposedly unbeatable Yokota.&#8221;

&#8220;Hopefully, both schools will be a force to be reckoned with come November&#8221; and the Far East playoffs, Alvarado said.

He&#8217;s optimistic about his Cougars not only of repeating as Class A champions but also gaining their first victory against Seoul American since 1996.

Alvarado&#8217;s Cougars boast the largest player contingent in school history. Of the 30 players at Wednesday&#8217;s practice, 19 were returners; 15 starters.

And they could be strong for years to come, Alvarado said. All but two of his 14 sophomores are sons of homesteading DOD contract employees, there for the long haul.

Leading the way for Osan will be senior Carlos Albaladejo, the reigning Stars and Stripes Athlete of the Year, plus durable sophomore back Will Rapoza and linebackers including sophomores Donny Keshel and Jesse Crockett.

Seoul American, meanwhile, considers this a rebuilding season. Though a handful of key veterans return from the Falcons squad that upset Yokota, then lost 34-14 at Kubasaki in the Nov. 12 Class AA championship, youth abounds on coach Julian Harden&#8217;s roster.

&#8220;We have a huge gap between first-year players and experienced ones,&#8221; Harden said of a team led by senior back David Smalls and senior interior players Charles Jones and Clark Campbell. &#8220;We may do OK on the peninsula only because our opponents face the same dilemma but as far as Far East, it will depend on injuries and how much we can get out of our regular season.&#8221;

&#8220;Realistically, our chances in league and Far East look dim,&#8221; McDaniel said. &#8220;But the kids are working hard, slowly learning responsibility and some football, and we hope to give an honest effort in our contests.&#8221;

Drawbacks-Lack of speed, depth, experience across board.

Outlook-Rebuilding. Big difference in playing level between veterans and first-year players. Harden expects to do well within the league but in the Far East Class AA playoffs, much will depend on injuries and how team grows during the regular season.

Drawbacks-Still plenty of youth with much room to develop.

Outlook-Contending. Not only a strong bet to repeat its Class A title but might challenge Seoul American. And with many players the sons of homesteading contractor employees, Cougars may be strong for years to come.

Drawbacks-Young, thin in numbers and experience across the board.

Outlook-Beginning-rebuilding. Warriors have yet to win a regular-season game since DODDS-Korea&#8217;s inception four years ago and with youth and lack of experience, this season could end resembling the previous three.