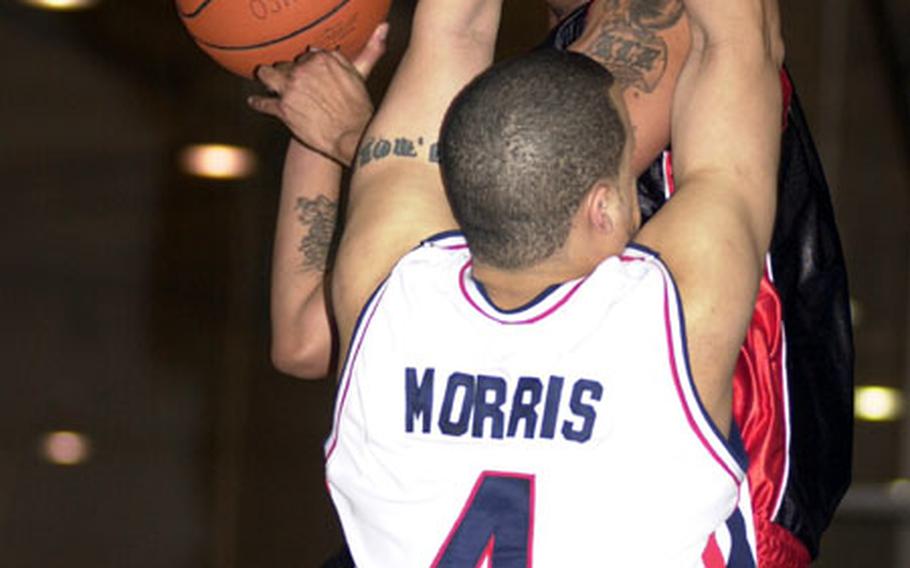 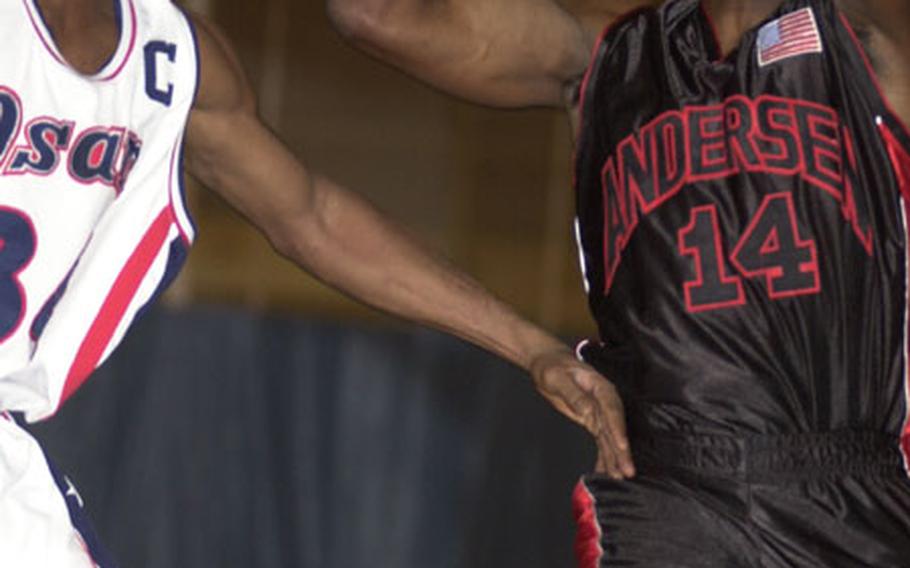 Marlowe Grimsley (14) of Guam&#39;s Andersen Bombers goes up for a shot against Vernon Turnbull (34) of the host Osan Defenders during Friday&#39;s playoffs. (Dave Ornauer / S&S)

His Andersen Bombers had just completed their third game in 10 &#189; hours. With six players in tow, and relegated to the fourth playoff seed after three straight pool-play losses in the Osan Pacificwide Invitational Basketball Tournament, their road to the title seemed to be a tough one.

It wasn&#8217;t just beating Yongsan, which had earned a first-round playoff bye and had a roster more than twice Andersen&#8217;s size, that gave Barnes a reason to smile. It was that the Bombers kept going all day Thursday despite their depleted numbers.

Upstarts such as Andersen were one reason that the two men&#8217;s and two women&#8217;s teams that earned byes by finishing first or second in their pools entered the playoffs with good reason to be apprehensive.

One No. 2 seed prevailed Thursday without a tussle, as the Osan Defenders men beat No. 3 Camp Humphreys 94-80. In the first round, Camp Humphreys knocked off No. 6 Osan American High 95-67.

On the surface, a first-round bye would seem to afford a team a couple of hours&#8217; extra rest and make the road to the championship a bit easier.

Stay in the winner&#8217;s bracket and the top two seeds need only to win three times to win their respective titles. Lose, particularly in the first round, and they could need as many as six victories.

But the Bombers and Osan women did their best to debunk the extra-rest theory on Thursday.

It can also lead a team to take another for granted, as Runnin&#8217; Rebels guard Robert Batiste said his team may have done against Andersen.

Despite the Queens&#8217; victory over Camp Humphreys, Smith still expressed a touch of concern over what lied ahead.