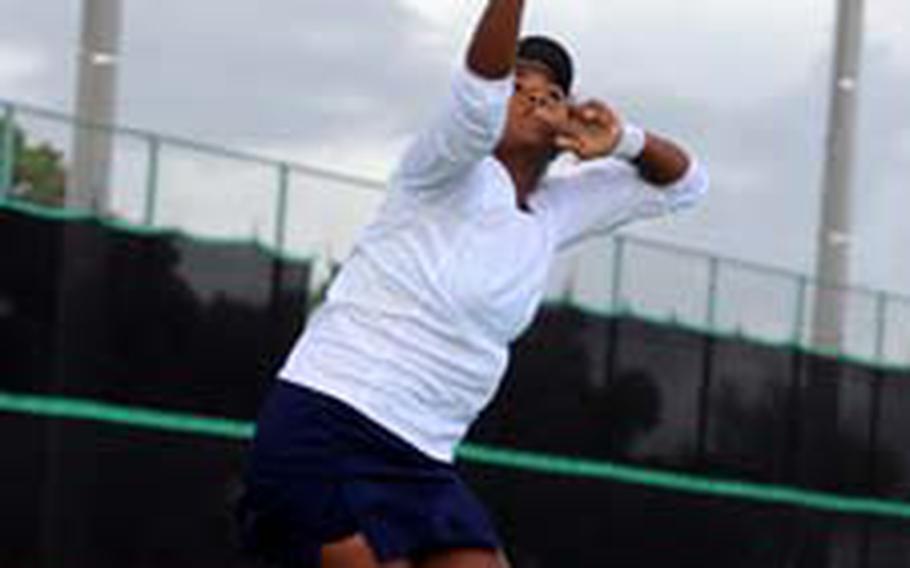 AGANA HEIGHTS, Guam &#8212; On the surface, it would seem Amber Gadsden is living the high life of a champion high school tennis player.

The junior just completed the finest singles season in Guam High history. Twelve victories in as many matches. A school-first perfect 9-0 regular season and an Independent Interscholastic Athletic Association of Guam tournament title for the girls.

Twice in the past two years, Gadsden came close to that coveted gold, only to fall short, and both times against Seoul American&#8217;s Kennedy Allen. Allen beat Gadsden 8-3 in the 2008 quarterfinals, then routed Gadsden 6-2, 6-1 in the 2009 semifinals; Gadsden finished third.

But rather than dwell on defeat, Gadsden says even before she steps off the court after a loss, &#8220;I look at what caused me to lose.&#8221;

Clinically, using videotape to break down her strokes and computer Web technology to learn ways to improve, Gadsden works with her father, Michael, an FBI agent on Guam, who sort of serves in a role similar to that of Richard Williams to daughters Serena and Venus &#8212; not a player, but an instructor.

&#8220;My father is very intelligent and very good at explaining things,&#8221; said Amber, who also works with a private swing coach and plays in as many tournaments as Guam holds locally off post.

Born at Yokosuka Naval Base, Japan, Amber and the family hopscotched to Los Angeles and San Diego, then to Hawaii, where, Amber says, she got serious about the sport in the fourth grade.

She played in a number of U.S. Tennis Association tournaments in Hawaii. Two years ago, the family moved to Guam, where she continues to play year-round.

Even though his star the past three years, Allen, had her way with Gadsden, Seoul American coach Robert Victoria sees signs that Gadsden could be on the verge of a Far East breakthrough.

So, what will it take for Gadsden to leap that last hurdle? Dedication, for starters, Gadsden said.

&#8220;You have to have focus. You can never give up and you have to be willing to make mistakes and learn from those mistakes,&#8221; Gadsden said.

Toughening up her mental and physical games are also vital, Aguon said, and she, her father and her other coaches plan to double both her physical and mental training, the latter &#8220;both on and off the court,&#8221; Aguon said.

&#8220;She&#8217;s going to dedicate herself to a strict regimen of commitment. &#8230; She has to tell herself that in order to get that Far East gold, she has to go into a training that is so intense, both mentally and physically, so she can aim toward that goal,&#8221; Aguon said.

Victoria feels the stars might align for a Far East title for Gadsden, with Allen graduating, most of reigning team champion Kadena&#8217;s squad departing and Gadsden&#8217;s solid season giving her a mental boost.