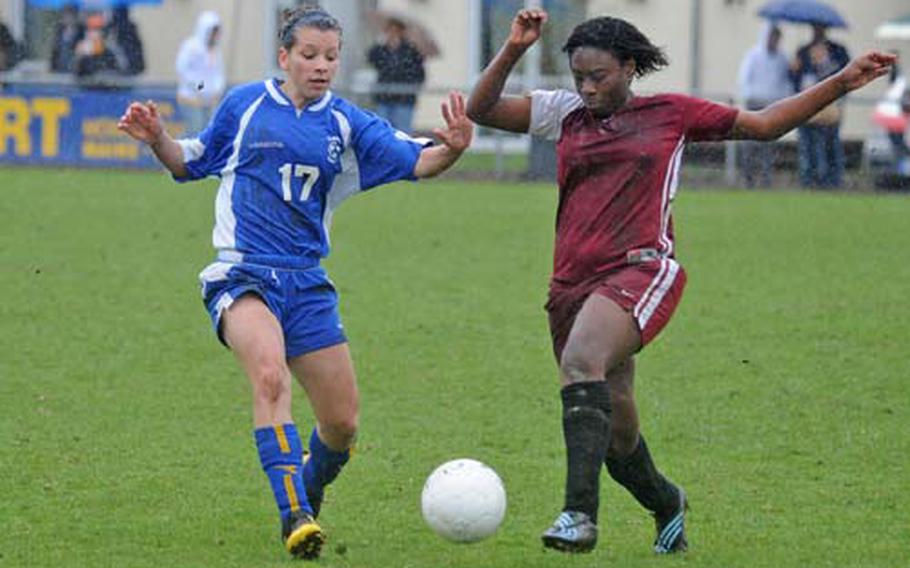 Wiesbaden&#39;s Celina Ponte, left, and Vilseck&#39;s Josie Rodriguez fight for the ball in the season-opener for both teams on Saturday. The game, played in the rain, ended 1-1. (Michael Abrams / S&S)

Wiesbaden&#39;s Celina Ponte, left, and Vilseck&#39;s Josie Rodriguez fight for the ball in the season-opener for both teams on Saturday. The game, played in the rain, ended 1-1. (Michael Abrams / S&S) 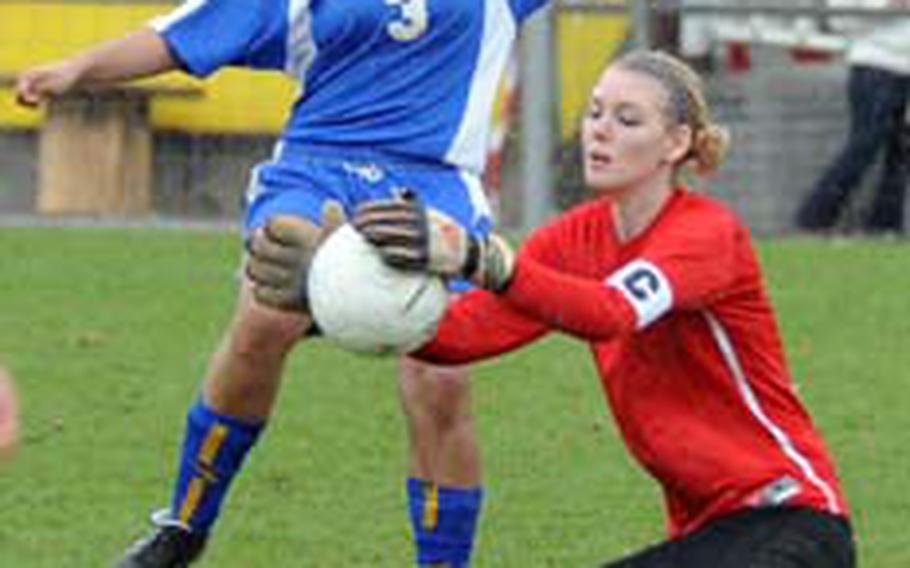 Vilseck goalie Angela Swann pulls in the ball before Wiesbaden&#39;s Iris Freeman can reach it. The game, the season-opener for both teams, ended 1-1. (Michael Abrams / S&S)

The road seems to agree with the Sigonella Lady Jaguars.

Kendra Coats assisted on Liz Frost&#8217;s second-minute strike and scored what would prove to be the game-winning goal 24 minutes later on a breakaway to lift Division III Sigonella to a 2-1 victory Saturday over winless Milan.

Milan&#8217;s Melissa Reynolds-Pressler scored after intermission, but that was all the Lady Panthers could muster against the defensive charge led by Sigonella&#8217;s Tracy Ewert and Denice Patron, according to Jaguars coach Shawn McCarthy.

The victory was the second of the season for unbeaten Sigonella, both against Division II competition. The Lady Jaguars visited Rome the previous week and blanked the American Overseas School of Rome 1-0.

Sigonella is to entertain a third D-II school, Aviano, this week before pausing for DODDS-Europe&#8217;s two-week spring break hiatus.

In other girls games of note Saturday:

Menwith Hill 2, Baumholder 1: At Menwith Hill, Rachael Solini scored twice to lead the Lady Mustangs of D-III over their D-II guests in a non-regional game that was the season-opener for both teams.

ISB 3, Bitburg 0: At Bitburg, Monica Rangel Calderas, Emilie Luscomb and Lauren Taylor found the net as Division I International School of Brussels blanked their D-II host in the first game of the season for both teams. The game was a non-regional contest.

Vicenza 2, AOSR 1: At Vicenza, Brandy Somera&#8217;s goal 18 minutes after halftime proved to be the game-winner for the 2-0 Lady Cougars.

Valerie Stanley&#8217;s eighth-minute strike had put the home team ahead, but the American Overseas School of Rome tied the game 12 minutes later when Christina Paoli stroked home the equalizer.

Wiesbaden 1, Vilseck 1: At Wiesbaden, Vilseck&#8217;s Althea Dunn drove home a second-half feed from Colleen Kiechler to salvage the tie in the season-opener for both teams.