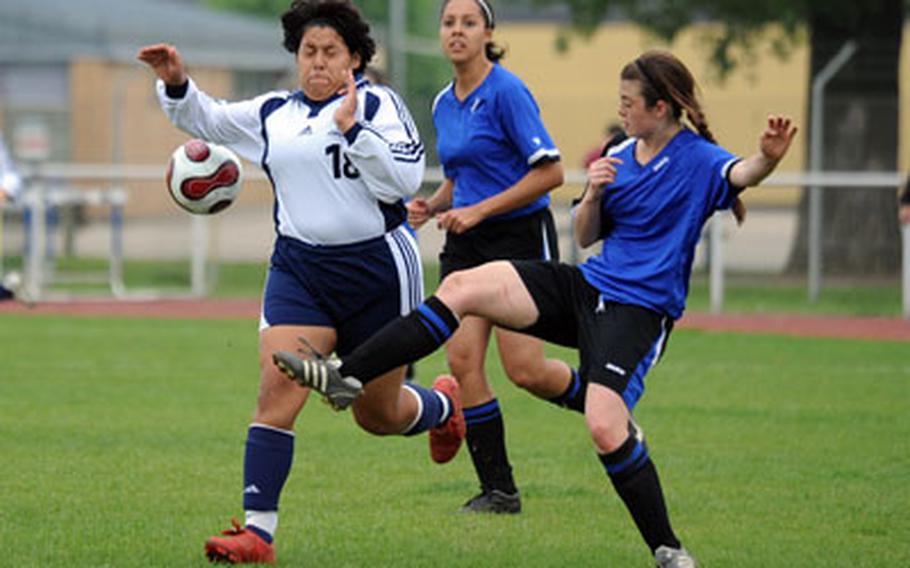 Annan Morelli of Hohenfels, right, clears the ball in front of an onrushing Nicolasa Torres of Heidelberg, as Jessica Walloch watches the action at center. Heidelberg beat Hohenfels 3-0 at home on Saturday. (Michael Abrams/S&S)

Annan Morelli of Hohenfels, right, clears the ball in front of an onrushing Nicolasa Torres of Heidelberg, as Jessica Walloch watches the action at center. Heidelberg beat Hohenfels 3-0 at home on Saturday. (Michael Abrams/S&S) 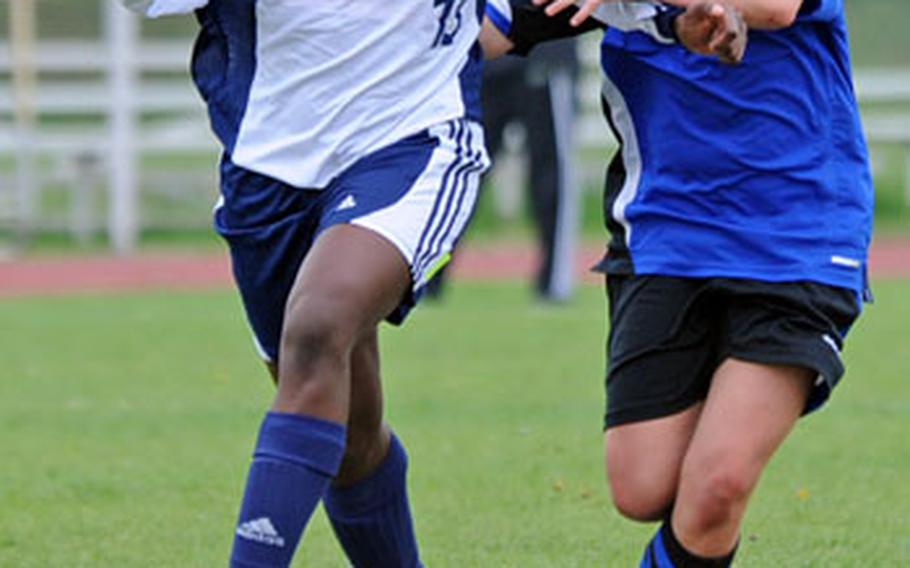 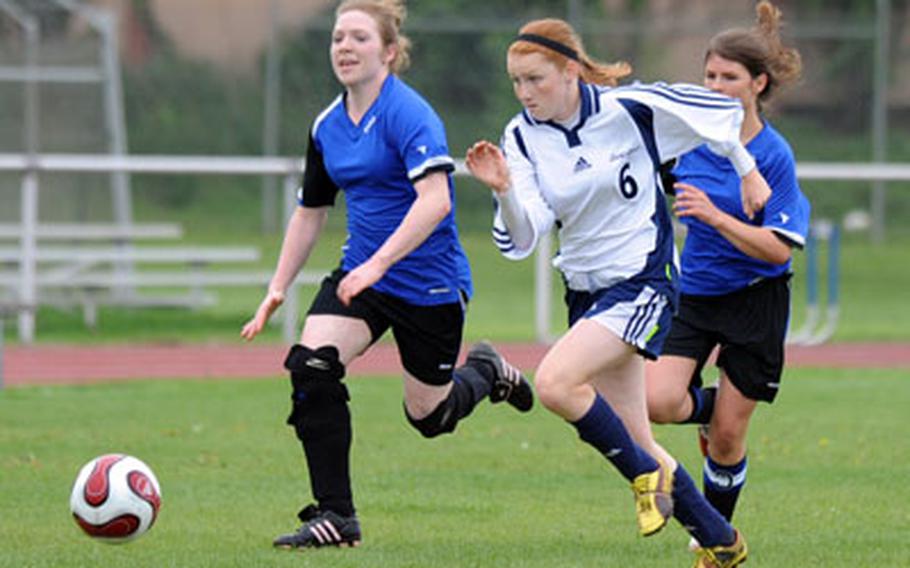 Heidelberg&#39;s Steph Miller, center, gets past Emily Adams, left, and Victoria Azera of Hohenfels, on her way to scoring her second of two goals in Heidelberg&#39;s 3-0 win at home on Saturday. (Michael Abrams/S&S) Hohenfels goalie Franziska Fenslage gets her hand on the ball as teammate Victoria Azera blocks out Heidelberg’s Steph Miller, who scored two goals in Heidelberg’s 3-0 victory over the visiting Tigers on Saturday. (Michael Abrams/S&S)

All-Europe striker Nelly Loney, who was one of the 10 scorers, recorded a save as one of three goalkeepers for Patch.

Patch, which clinched the Region III championship the previous week with a 4-1 victory over visiting Black Forest Academy, closes its regular season at home this Saturday against winless Ansbach. The Lady Panthers appear headed on a collision course against unbeaten Ramstein in the European Division I tournament May 19-22 in Ramstein.

Ramstein 7, Kaiserslautern 1: Friday at Kaiserslautern, the Ramstein defense surrendered its first goal of the year, yet romped behind newcomer Josie Seebeck&#8217;s hat trick.

But the end of the goal-less streak still stung, Ramstein coach Ricardo Buitrago said Saturday in an e-mail.

"Ramstein seemed a bit disoriented and disorganized after being scored upon," he wrote, adding that the Lady Royals&#8217; adjustment to the new status wasn&#8217;t helped by the spirited play of Kaiserslautern midfielder Olivia McQuail. "She moved, handled and dribbled the ball well," Buitrago reported.

Kaiserslautern played a scoreless tie at SHAPE on Saturday to take a 2-2-2 overall record into this Saturday&#8217;s regular-season finale against visiting Mannheim.

Heidelberg 3, Hohenfels 0: Saturday at Heidelberg, Stephanie Miller put two shots into the Lady Tigers&#8217; net to lift Heidelberg to a 3-2-1 overall mark and a 3-1-1 record in Region III.

Naples 5, Sigonella 0: Saturday at Naples, Demi Holbrook scored three times and Haylea Witz twice to lift the Lady Wildcats to their fourth straight victory. Naples (3-2-1) is scheduled to host American Overseas School of Rome in its regular-season finale Saturday. Sigonella hosts Marymount this Saturday as both teams close the regular season and prepare for the DODDS-Europe tournament.

Aviano 5, AOSR 2: Saturday at Rome, Cheryl Craver scored three times, and Chelsey Bayne had three assists to help Aviano (3-3-0) even its record at the expense of the American Overseas School of Rome (0-4-1).

Wiesbaden 1, Bitburg 0: Saturday at Wiesbaden, Celina Ponte provided the only goal of the game, and the Wiesbaden defense, led by Andy Thomas, made it stand up.

Wiesbaden advanced to this Saturday&#8217;s showdown game at Ramstein with the Region II title on the line. The Lady Warriors are 5-0-1 overall and 4-0-0 in the region, tied with Ramstein for the regional lead.

Wiesbaden, along with Ramstein and Patch, are unbeaten in Division I into the final game of the regular season. All will vie for the European D-I tournament title the following week.