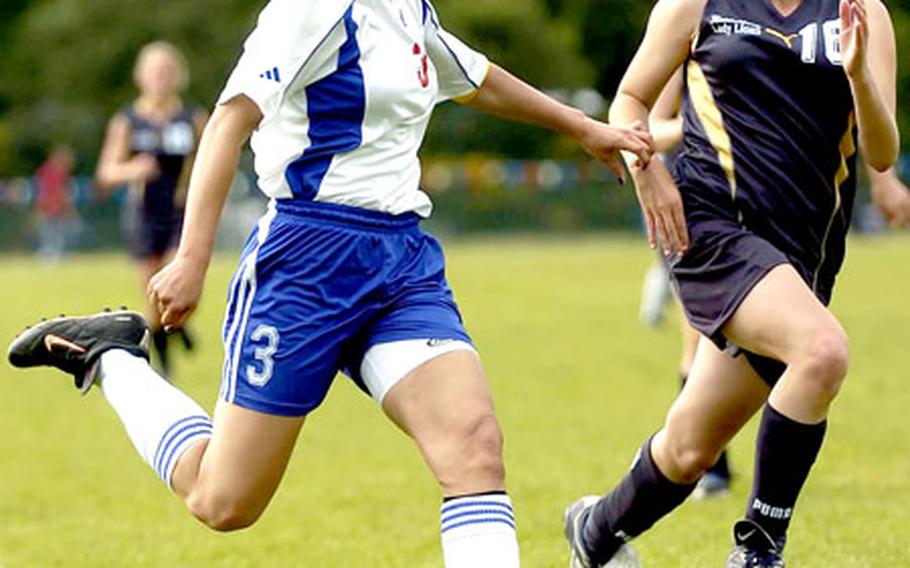 Russell, a senior, is one of five repeat first-teamers on the all-star squad selected by a panel of coaches, joining teammate Kylie Marchant, a sophomore striker; Hanau senior striker Kyri Bye-Nagel; senior sweeper Tracy Light of Naples and senior midfielder Mari Shakir of Division I champion Ramstein as first-team holdovers.

Although Russell is the only three-time first-teamer chosen, Light achieved the distinction of being named All-Europe four times. She was a second-teamer her freshman and sophomore years.

Two freshmen, Heidelberg sweeper Ana Anger and Aviano midfielder Anna Schrader &#8212; a 14-goal scorer &#8212; put themselves into position for a four-season run by making the top 15 in their first varsity seasons.

For Anger, talking by telephone from New Jersey on Friday, the selection marked the high point of a season that far exceeded her expectations.

At the start of the year, &#8220;I was actually worried about just playing for the team,&#8221; said Anger, who at 14 is still too young to participate in the Olympic Development Program most of the elite high school players attend during the summer. &#8220;It made me feel good.&#8221;

Sophomores on the team include Patch&#8217;s Marchant, Ramstein sweeper Katee Norris, Kaiserslautern striker Paris Cervantes and Sigonella striker Whitney Lynch. The junior class is represented by Bye-Nagel, a 16-goal scorer who made the All-Europe second team as a freshman in 2003; AFNORTH sweeper Tauree Blankenship, and Ramstein midfielder Melissa Hirzel, up from last year&#8217;s second team.