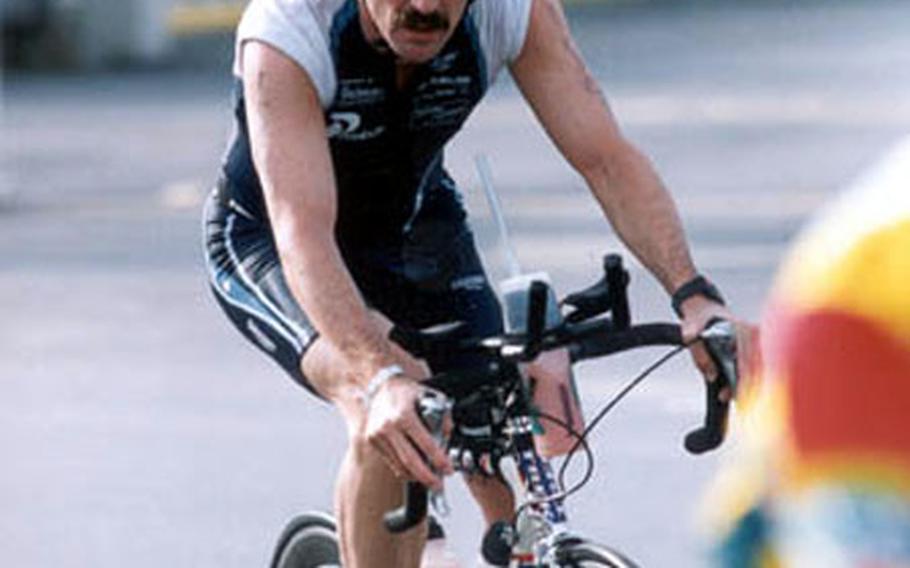 Leigh Plowman, recreation director for the Armed Forces Recreation Center in Garmisch, Germany, recently earned a berth in the Ironman world championships, set for next October in Hawaii. (Courtesy of Leigh Plowman)

Leigh Plowman, recreation director for the Armed Forces Recreation Center in Garmisch, Germany, recently earned a berth in the Ironman world championships, set for next October in Hawaii. (Courtesy of Leigh Plowman) 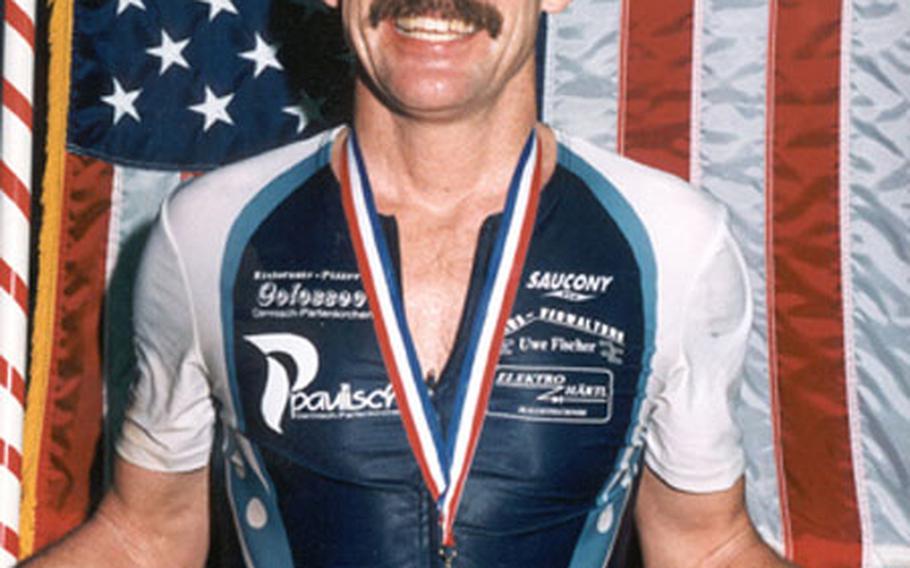 Leigh Plowman is all smiles after finishing the Panama City Ironman contest in Florida. (Courtesy of Leigh Plowman) 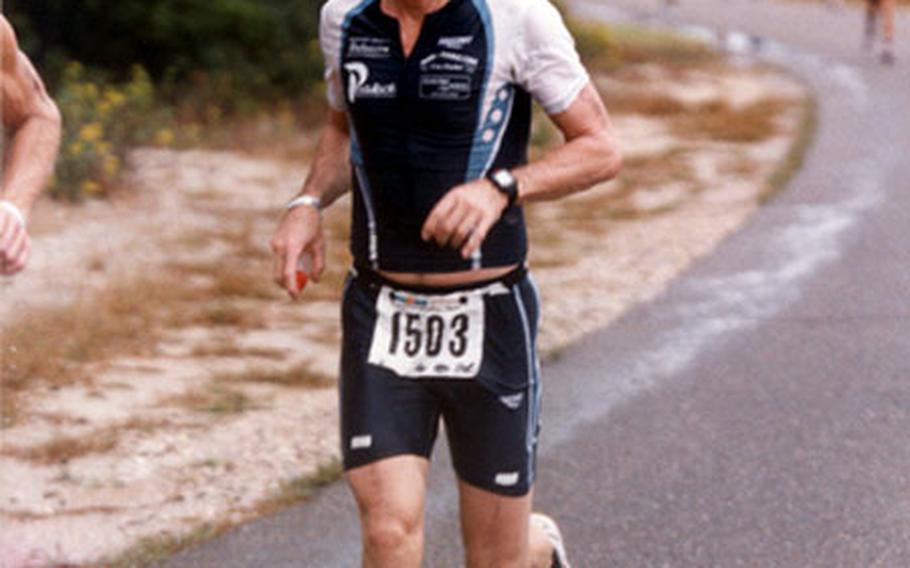 Leigh Plowman works his way down a hill during the final leg of the Panama City Ironman competition in Florida. Plowman, who finshed the 26.2-mile run in 3:47.17, completed the course in 10 hours, 21 minutes, 46 seconds, the sixth best time in his age group in the world this year. (Courtesy of Leigh Plowman) 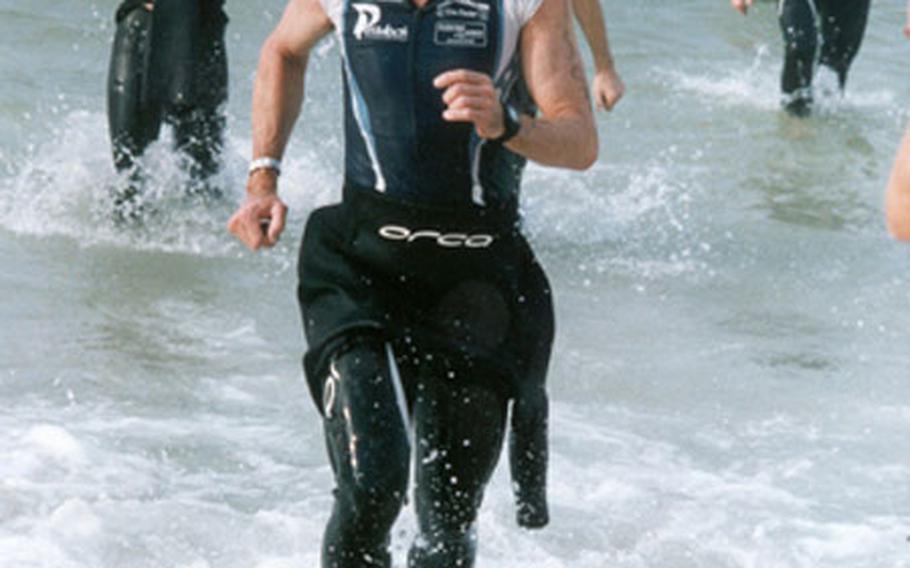 Leigh Plowman, comes running out of the water after the first leg of the Panama City Ironman competition in Florida. Plowman said he battled stomach cramps during the 2.6-mile swim. (Courtesy of Leigh Plowman) 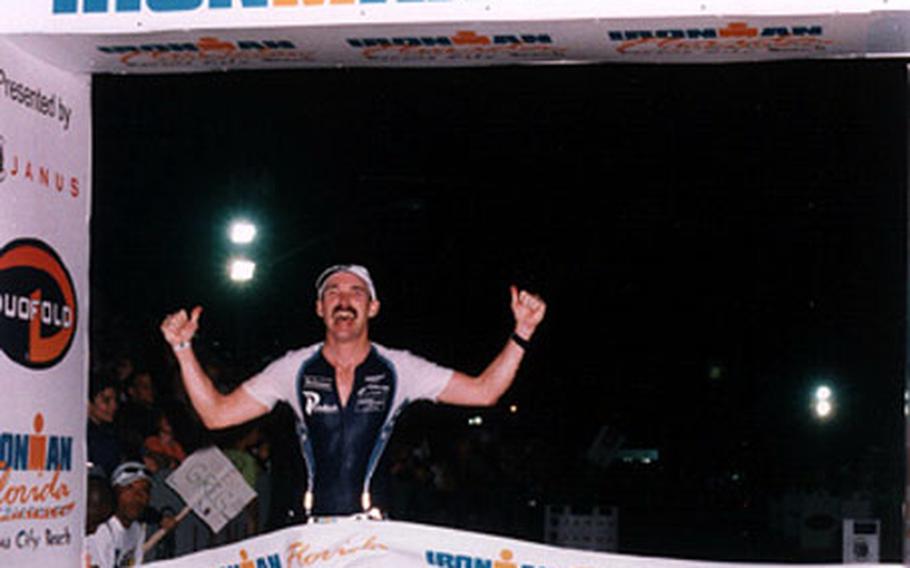 Standing beside the course at the Ironman Triathlon World Championships in Hawaii two years ago, Leigh Plowman decided he was cut out for something more than spectator sports.

Next year, Plowman &#8212; recreation director for the Armed Forces Recreation Center in Garmisch, Germany &#8212; will return to the world championships &#8212; this time, as a competitor.

At the Ironman Florida triathlon in Panama City, Fla. on Nov. 9, he earned one of seven berths in his age group for next year&#8217;s event.

Plowman said he got into the sport about 10 or 12 years ago, but took about a three-year break from training.

Plowman, a perennial U.S. Forces-Europe mountain bike and ski champion, cited the passage of years and a slight dose of middle-aged spread for his return to the punishing sport.

Take it up and, as it turned out, take it seriously.

After that he ran in the Chicago Marathon.

His time of three hours and 13 minutes in the 26-mile event lit a spark.

As is typical of endurance sports, Ironman Florida was a case of try and try-again.

&#8220;I had entered Ironman Switzerland in July and finished sixth there as well,&#8221; Plowman said. &#8220;Unfortunately, there were only four Hawaii-qualifying spots available for my age group.&#8221;

Plowman, a former high school quarter-miler and pole vaulter, said there are 3,000 athletes in his age group trying to claim one of the 100 berths available for Hawaii 2003. Thanks to his performance in Florida, one of 24 qualifying events held throughout the year all over the world, one of those berths in Hawaii belongs to him.

As usual, Plowman had to come from way back after the swim in Florida. He came out of a choppy Gulf of Mexico in 1:13, nursing stomach cramps and standing in 684th place.

&#8220;I had just swallowed about a gallon of seawater,&#8221; Plowman recalled, &#8220;and I was worried about my nutritional program. You can&#8217;t eat during the swim and you don&#8217;t eat all that much during the run, so when you&#8217;re on the bike you have to eat almost constantly. I had to decide whether to eat anyway and perhaps make it worse or wait and fall behind on my nutritional plan.&#8221;

Plowman decided to eat, and began feeling better as he swung into his two strongest events.

However, the same breezes that stirred up those three-foot waves in the Gulf also blew in 90 minutes of heavy rain during the bike race.

The rain let up during the marathon, but standing water slowed the runners.

It was painful, Plowman said, but not damaging.

To prepare for next October, Plowman plans to participate again in the Bavarian Cup series of six half-triathlons in which he finished second last season, and perhaps a full triathlon May 17 at Lanzarote, Canary Islands.

Plowman said he gets plenty of support from his family: wife, Dagmar, who looks after his nutritional needs, and daughters Anna, 9, and Sophia, 5.