From meltdown to smackdown, Branch shines 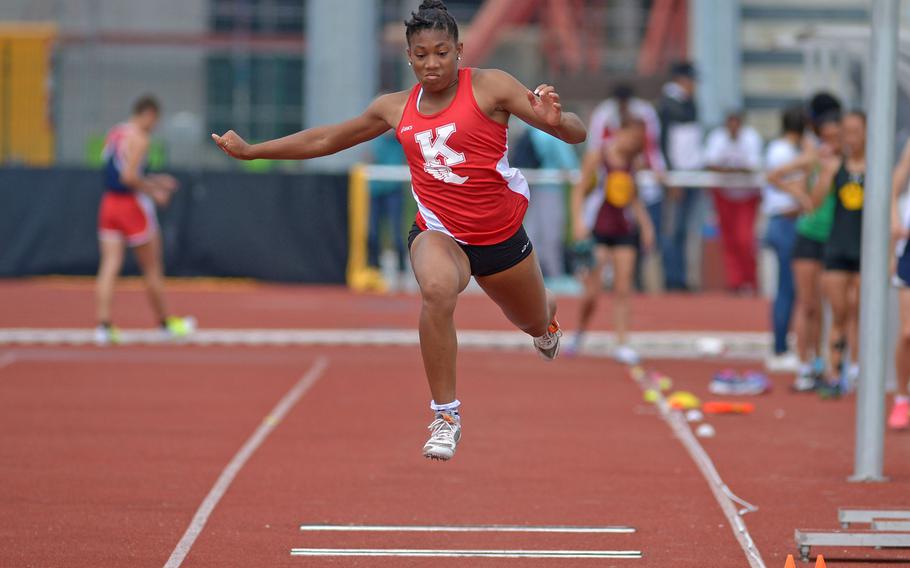 Kaiserslautern's Jada Branch clears the last hurdle on her way to winning the girls 300-meter hurdles event at the DODEA-Europe track and field championships in Kaiserslautern, Germany, Saturday, May 28, 2016. She won in 45.38 seconds to capture her third gold of the championships. (Michael Abrams/Stars and Stripes)

Branch was competing in her first season of track and field in 2015.

She had won the triple jump but sprinting in front of the hometown crowd in a high-intensity race was a different animal.

She’s not sure what happened but somewhere on the curve, “it hits me,” she said. “I start reflecting on the season as I’m supposed to be running. I started bawling.”

That might be the last time Branch finds herself at the back of the pack in track and field.

Branch this season had a breakout year that ended with four gold medals at the DODEA-Europe track and field championships. For her stellar performances, Branch is the 2016 Stars and Stripes girls’ track and field Athlete of the Year.

That 200 moment lit a fire in Branch for the sport. The 16-year-old had spent years as a competitive gymnast while her family lived in Georgia and only went out for track and field at the suggestion of a family friend.

“Now that I’m looking back at it, maybe I needed that little cry,” she said. “It motivated me to keep doing it. I definitely saw a huge improvement this year.”

Perhaps most impressive was her performance in the 300-meter hurdles when you consider this: In her first year of serious competition in the event, Branch overpowered the rest of the field with raw strength and speed and came within .67 seconds of matching the European record of 44.71 seconds.

Branch didn’t get to redeem herself in the 200 meters. The event was one of several that went uncontested when the meet was called because of thunderstorms.

“I was totally ready for that 200,” she said. Branch nonetheless secured the gold medal with the top seed of 26.33 seconds.

She’ll have to wait until next year to test herself in the sprints, a season that now holds much promise and high expectations.

“I have to break the 300 (hurdles) record, I have to break the triple jump, and I have to try and do my hardest in the long jump as well,” she said of her goals. “I’m trying to cut down my running times on the track and gain more feet and inches in the jumping events.”