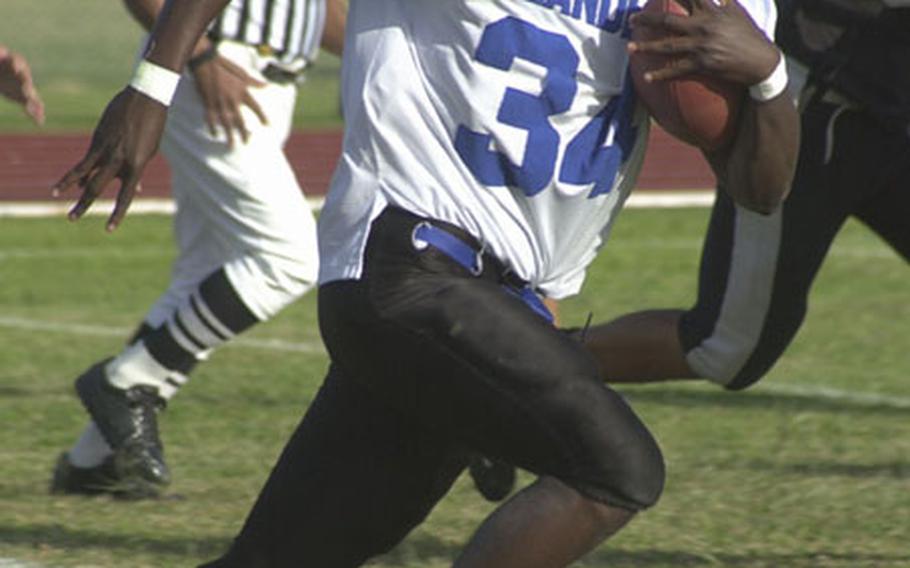 Kadena Islanders running back Keith Loving races for a first-quarter touchdown, one of three he scored against the Kubasaki Samurai during Friday&#39;s Okinawa Activities Council game. (Dave Ornauer / S&S) 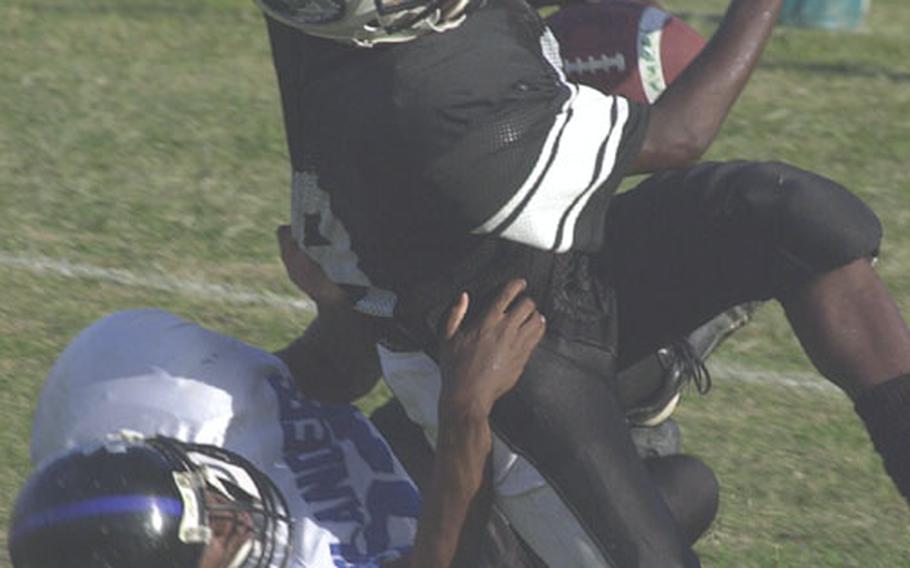 Kubasaki Samurai running back Thaddeus Reap is wrestled down by Kadena Islanders defender David McCowan during Friday&#39;s game. The Islanders blanked the Samurai 68-0, the worst defeat in the Samurai&#39;s history. (Dave Ornauer / S&S)

Freshman running backs Darnell Womach and Terrence Crenshaw rushed for a combined 207 yards and five touchdowns on 28 carries to power the Kadena Buccaneers past the Kubasaki Shogun 55-8 and the Kadena Islanders over the Kubasaki Samurai 68-0 in Okinawa Activities Council games Friday.

The Islanders (5-0) earned at least a tie for the top seed in the OAC playoffs starting Nov. 4 at Kubasaki&#8217;s Mike Petty Stadium. The Bucs (4-1) stayed on their heels.

Womach rushed for 139 yards on 20 carries, scoring on runs of 1 and 9 yards for a Buccaneers team that played its second offense much of the way.

Upperclassmen also had their turn in the spotlight as senior quarterback A.J. Morgan piled up 247 all-purpose yards, running 57 yards for a touchdown, throwing TD passes of 19 yards to David Toa and 70 to Gary Wright and returning one of his two interceptions 33 yards for a score.

Tyler Schmidt ran 3 yards for a score and threw a screen pass 18 yards to freshman Joshua Johnson for a touchdown.

The Buccaneers outgained the Shogun (1-5) by 407 yards to 130 and forced seven turnovers, while committing none.

The Shogun scored their first points of the season in four tries against Kadena teams, getting a 6-yard TD run from Ronnie Stevens in the fourth quarter.

Crenshaw contributed touchdown runs of 3, 9 and 7 yards, finishing with 68 yards on eight carries as the Islanders handed the Samurai their worst defeat in team history.

Mendoza spread the wealth, as six players scored touchdowns in the only game in the Pacific this season without a turnover.

Keith Loving led the Islanders with 120 yards on 10 carries, including touchdown runs of 26 and 24 yards on consecutive possessions as well as a 29-yarder to open the scoring.

Cole Maxey, who normally plays the line, had one carry for a 14-yard touchdown.

Alex Berrios&#8217; completed one pass for an 11-yard touchdown to Arnold Tillman.

The Islanders held a 310-3 advantage if yardage over the Samurai (0-5), who dressed 16 players, finished with 14, and never crossed midfield.

Next up for the Bucs and Islanders is a Thursday showdown to determine the top seed in the playoffs, which culminate in the island championship Nov. 8.

The winner earns a berth in the Rising Sun Bowl on Nov. 15 when the Japan Football League championship is up for grabs.