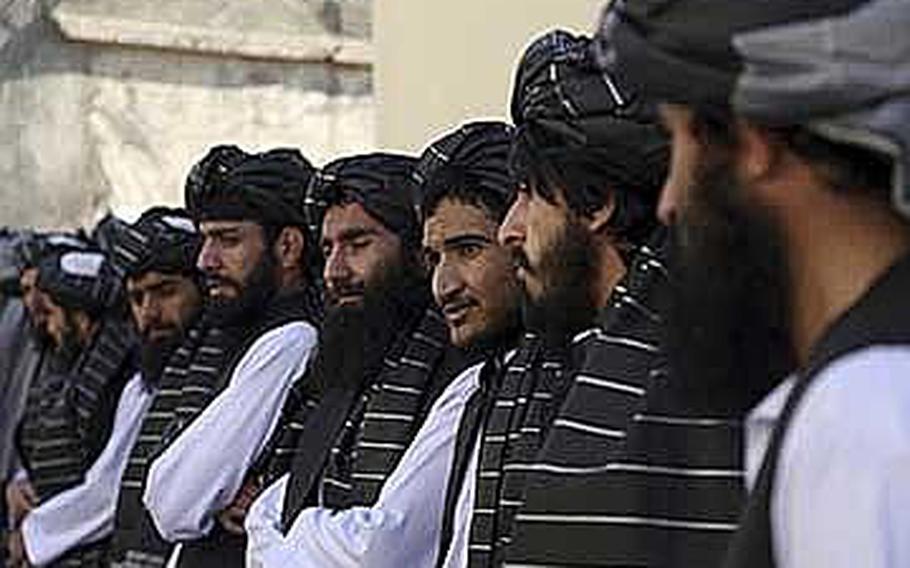 Afghan prisoners line up after their release from Pul-e-Charkhi prison, in Kabul, Afghanistan, Thursday, Jan. 11, 2018. The Afghan president pardoned 75 prisoners loyal to Gulbuddin Hekmatyar, a former warlord and U.S.-declared terrorist who signed a peace agreement with Kabul in 2016. The deal gave Hekmatyar and his followers immunity for past actions and granted them full political rights. (Rahmat Gul/Associated Press)

KABUL, Afghanistan — An unofficial meeting between Taliban and Afghan government representatives in Turkey this weekend could “pave the way” to a negotiated end to the country’s 16-year war, an Afghan official said Sunday.

Mohammad Ismail Qasimyar, head of the international relations for Afghanistan’s High Peace Council, confirmed that the meeting was being held in Istanbul, but he said the government participants don’t have the authority to make any decisions as part of the talks.

“We still welcome such efforts,” Qasimyar said. “We hope this will help and pave the way for a broader peace talks process, so the Afghan people’s dream of peace comes true.”

It’s not the first time the parties have tried to broker a peace settlement, but previous attempts have not been fruitful.

Kabul’s attempts to bring the Taliban into four-nation talks with the U.S., China and Pakistan fell apart in 2016, after the 2014 death of Taliban founder Mullah Mohammed Omar was revealed. The Taliban has since refused to negotiate.

This year, U.S. officials have said their goal is to drive the Taliban into negotiations through military and social pressure on the insurgents and diplomatic pressure on its supporters. An aggressive military campaign began late last year targeting the drug operations that finance the insurgency.

The U.S. has also increased pressure on Pakistan, who the U.S. had lobbied to use its influence to bring insurgents to the peace table, by announcing earlier this month it would halt military aid to Islamabad.

Neither the U.S. nor Pakistan appear to be part of the latest dialog, which began over the weekend in Istanbul with the help of the Turkish government, local media reported.

An anonymous participant told Afghanistan’s Pajhwok news agency the latest talks brought together representatives of the Afghan government, the Taliban, a splinter group loyal to Mullah Mohammed Rassoul and Hezb-i-Islami Afghanistan. The talks began Saturday and were slated to run through Monday, the source said.

The source said similar meetings were held in Turkey last year, but the media had not been informed of those discussions.

A source close to the Taliban told Pajhwok that the meeting was the third of its kind in Turkey, but that the latest session was organized as a result of Hezb-i-Islami founder Gulbuddin Hekmatyar’s visit to the country.

Qasimyar confirmed that the High Peace Council had sent an envoy and Hezb-i-Islami Afghanistan was also participating. He said the participants would soon release a statement about the meeting and who was involved.

Hekmatyar, a former warlord and U.S.-designated terrorist, ended his armed group’s 16-year insurgency against Kabul in 2016 and returned to the Afghan capital last year.

The Afghan government had wooed Hekmatyar into laying down arms with an agreement that gave him and his followers immunity for past wartime abuses and allowed them full political rights. Officials had hoped his example would draw the Taliban into peace talks, too.

The meeting with the Taliban comes just days after the Afghan president pardoned 75 prisoners who were loyal to Hekmatyar.

Navy Capt. Tom Gresback, a spokesman for NATO’s Resolute Support mission in Kabul, said Sunday evening that officials were seeking more details about the latest talks, but that the international coalition “is in full support of the government of Afghanistan in all efforts to advance dialogue for peace and reconciliation.”