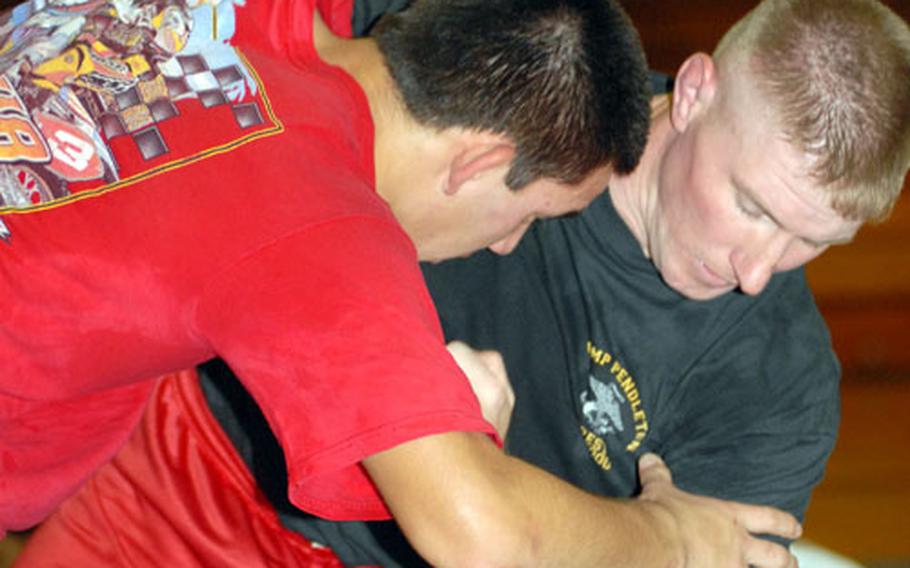 Harper, 31, a two-time All-American at Indiana University, conducted a clinic Friday and Saturday touching on all aspects of wrestling but focusing on getting in shape and attaining a wrestling mind-set.

&#8220;I&#8217;d love to give the kids a good workout and give them that mind-set,&#8221; said Harper, of South Bend, Ind., a first lieutenant with Headquarters Battalion, 3rd Marine Division at Camp Courtney.

That judgment is backed by more than two decades of wrestling and coaching experience. A wrestler since age 5, he&#8217;s been on teams in high school, at Indiana University and the Marine Corps, for which he was on the All-Marine team for three years. He coached the Marine Corps varsity team at Camp Pendleton, Calif., from 1998 to 2000, then the All-Marine team the next two years.

Friday&#8217;s session touched mostly on conditioning, with a variety of drills that left almost all sweat-drenched and exhausted.

Harper and Chumley put the wrestlers through exercises designed to hone their conditioning.

Replied Harper: &#8220;But you understand how important it is to remain in your stance and circle.&#8221;

Then he showed them how to better learn various moves by drilling at half speed. &#8220;Going 50 to 70 percent to get the feel of a move without going at full speed. Working smarter,&#8221; he said.

The Dragons have 20 Far East tournament team championships to their credit. But this year&#8217;s defending champion is Kadena, the Dragons&#8217; Okinawa island rival &#8212; and Harper was willing to help the team prepare for a shot at reclaiming the title.

The Friday session concluded with a grueling bout of &#8220;shark wrestling:&#8221; Wrestlers were grouped in fours and took turns wrestling each other. Two combatants grappled for 1 minute each &#8212; and those waiting to wrestle remained in pushup position.