For Pacific wrestlers, Kinnick's "Beast" is becoming a thing of beauty 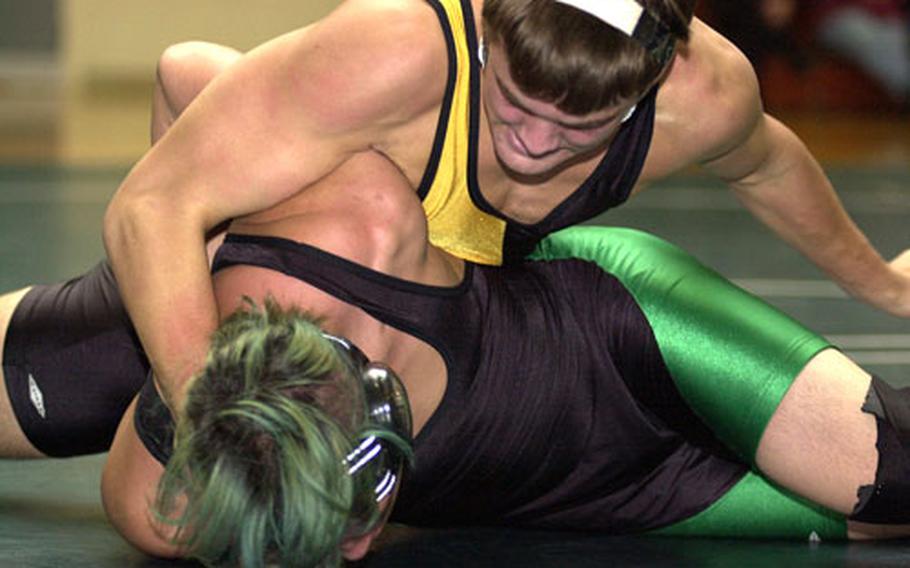 But for the international schools, no longer a part of DODDS-Pacific&#8217;s Far East Tournament, the Beast becomes their unofficial Far East championship.

For both groups this year&#8217;s Beast has grown in importance and stature. It will welcome eight DODDS and five private schools, all regular players in past Far East Tournaments, in a one-day battle of skills, challenges and a new type of rivalry.

From their inception in 1976, DODDS&#8217; Far East wrestling tournaments have included international schools among competitors. But in September, DODDS-Pacific&#8217;s Far East Activities Council announced that due to concerns about billeting and available facilities, Far East tournaments no longer would be open to those schools.

That leaves teams such as St. Mary&#8217;s International, with six Far East titles, and American School In Japan, with four, on the outside looking in &#8212; and viewing the Beast quite differently.

For starters, every school that has won a Far East team title is in the Beast field. And there are nine previous Far East individual weight-class champions, including three-time champion Zolboo Enkhbayar of Brent International-Subic, the only two-time winner of the Far East Tournament&#8217;s Outstanding Wrestler award.

DODDS-Pacific coaches benefit from scouting their Far East Tournament opposition a couple of weeks in advance, while wrestlers get to improve their skills.

Coach Julian Harden of defending Far East dual-meet team champion Seoul American calls it a &#8220;steppingstone to get us ready for Far East.&#8221;

Said Yokota coach and Far East Tournament organizer Brian Kitts, &#8220;You get to see the three [Class AA] schools that will be at Far East: Kadena, Kubasaki and Seoul American. You can see what other Japan schools have. It&#8217;s always great to see the other lineups and how you do against international schools.&#8221;

Harden&#8217;s Falcons will bring just three wrestlers, each of whom placed in last year&#8217;s Far East: Chris Steuerwald (122 pounds), John Crabtree (135) and defending 180-pound titlist Scott Tunis (215). It&#8217;s their first look at somebody besides Osan and Taegu American, their only opposition in Korea.

And last year&#8217;s Far East heavyweight champion David Burnett of Zama could drop to 215, where he might face Tunis. Also in the mix: sitting 215-pound runner-up Paul Haecherl of Kubasaki and Yokota&#8217;s unbeaten Jim Scott.

That Enkhbayar and other international school talents won&#8217;t be in Far East left Copeland and Stanford with mixed feelings.

WHAT: Invitational tournament among eight Department of Defense Dependents Schools-Pacific and five international and missionary school teams that have competed in DODDS-Pacific Far East Tournaments since they began in 1976.

215 pounds: With Burnett dropping down and Tunis moving up to 215, this weight is one of three with two past Far East champions. Also in the mix: unbeaten Jim Scott of Yokota, Grady Pennell of Kadena and Kubasaki&#8217;s Paul Haecherl, last year&#8217;s Far East 215-pound runner-up.

168 pounds: Wood very likely could meet Copeland in the championship, although St. Mary&#8217;s Pavel Kachailov could move down from 180 and Brent&#8217;s rising star Ryland Geiger, a freshman, might have an impact.