For Kubasaki’s Thompson, it’s painful to be on sidelines 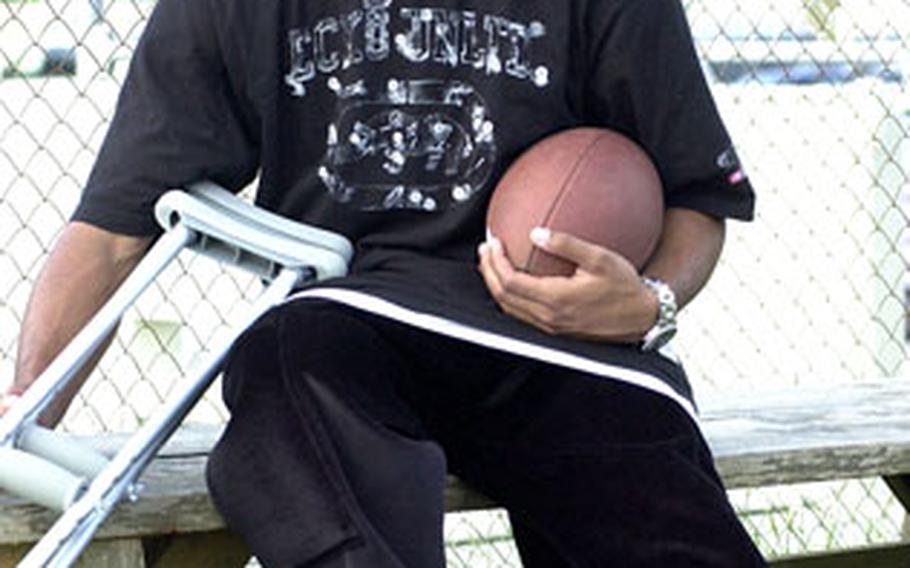 He shined in the Kubasaki Dragons&#8217; 35-3 victory over the Kadena Panthers on Oct. 14 in Game 1 of the best-of-three Okinawa Activities Council football championship series. The 6-foot-5 tight end leaped over a defensive back to snag a touchdown pass and ran 29 yards for another, amassing 128 all-purpose yards and fueling a smoking Dragons defense.

But just a week later, an unfortunate twist of his left ankle torpedoed his season. It chipped a bone on the left side of his ankle; two ligaments on the right side were bleeding.

The senior&#8217;s leg was put into a cast Tuesday. Doctors and specialists at U.S. Naval Hospital Camp Lester have told him he&#8217;ll miss at least a month, perhaps two &#8212; taking him well into basketball season.

More immediate is dealing with the disappointment of not being able to participate in the football playoffs.

For most injured players, healing the physical damage may be only part of the challenge. They also must try to stitch up a torn mind: wanting to heal but aching to play.

But, he said, his father is helping give the young athlete something to think about other than missed games: Marine Master Gunnery Sgt. Ira Thompson, assigned to Camp Kinser, keeps his son mindful of his grades &#8212; he carries a 3.5 grade-point average &#8212; to stay in the hunt for athletic scholarships.

Thompson said he hopes the cast can come off in early December. Then he&#8217;ll enter rehabilitation, hoping to resume basketball in early January.