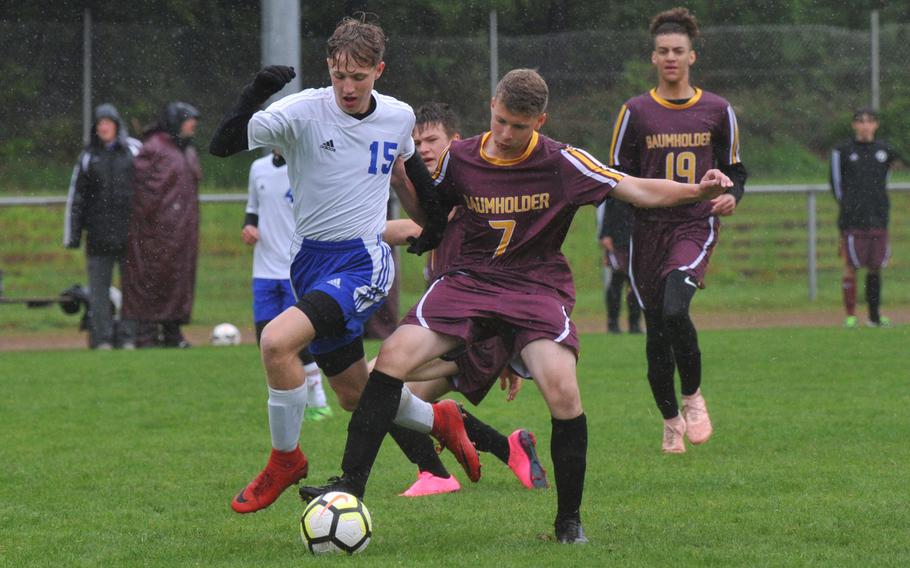 Dennis Yusofoff of Hohenfels gets past Baumholder defender Noel King on his way to scoring a goal in the Tigers' 7-0 win over the Bucs in a Division III game in Landstuhl, Tuesday, May 21, 2019. (MICHAEL ABRAMS/STARS AND STRIPES)

Dennis Yusofoff of Hohenfels gets past Baumholder defender Noel King on his way to scoring a goal in the Tigers' 7-0 win over the Bucs in a Division III game in Landstuhl, Tuesday, May 21, 2019. (MICHAEL ABRAMS/STARS AND STRIPES) 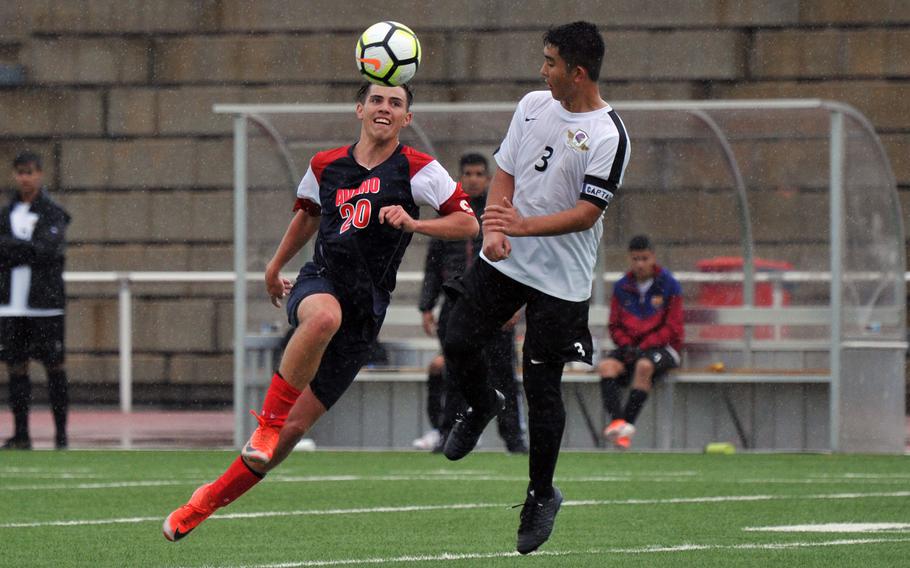 Aviano's Logan Hinchcliff knees the ball over Bahrain defender Joseph Camuso in a Division II game in Kaiserslautern, Tuesday, May 21, 2019. The game ended in a 1-1 tie. (MICHAEL ABRAMS/STARS AND STRIPES) 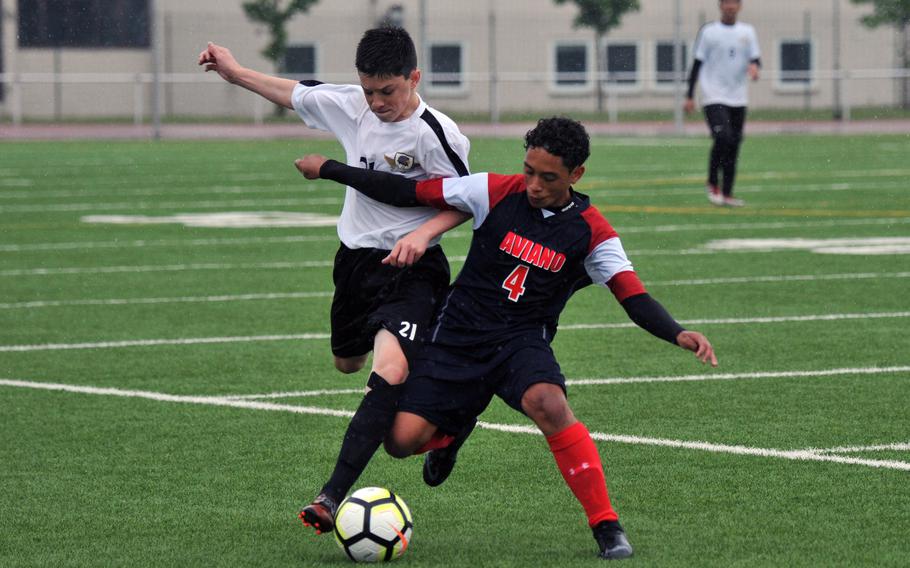 Bahrain's Caleb Wells, left, and Aviano's Nicholas Gilbert fight for the ball in a Division II game in Kaiserslautern, Tuesday, May 21, 2019. The game ended in a 1-1 tie. (MICHAEL ABRAMS/STARS AND STRIPES) 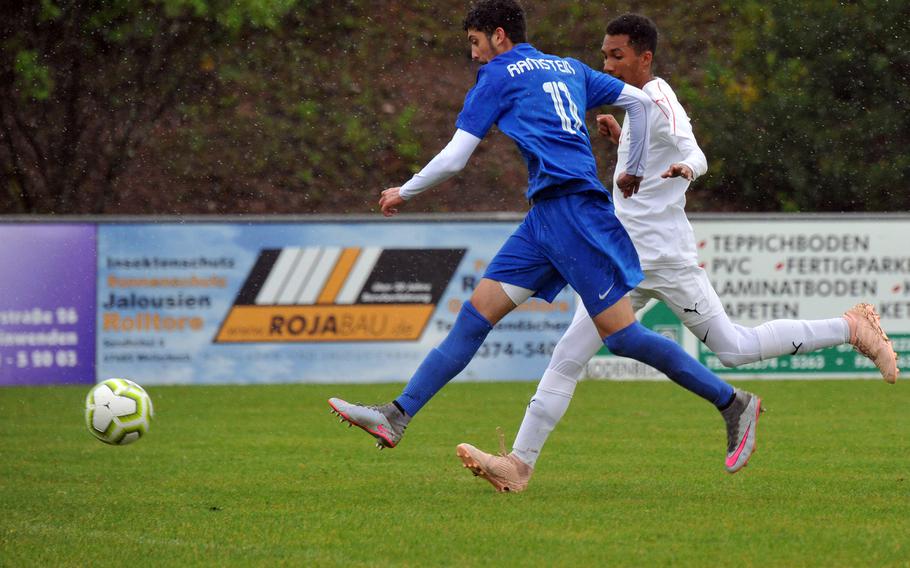 Ramstein's Jaden Buelvas gets past Kaiserslautern's Elijah Daniels to score a goal in the Royals 4-0 Division I win in Reichenbach, Tuesday, May 21, 2019. (MICHAEL ABRAMS/STARS AND STRIPES) 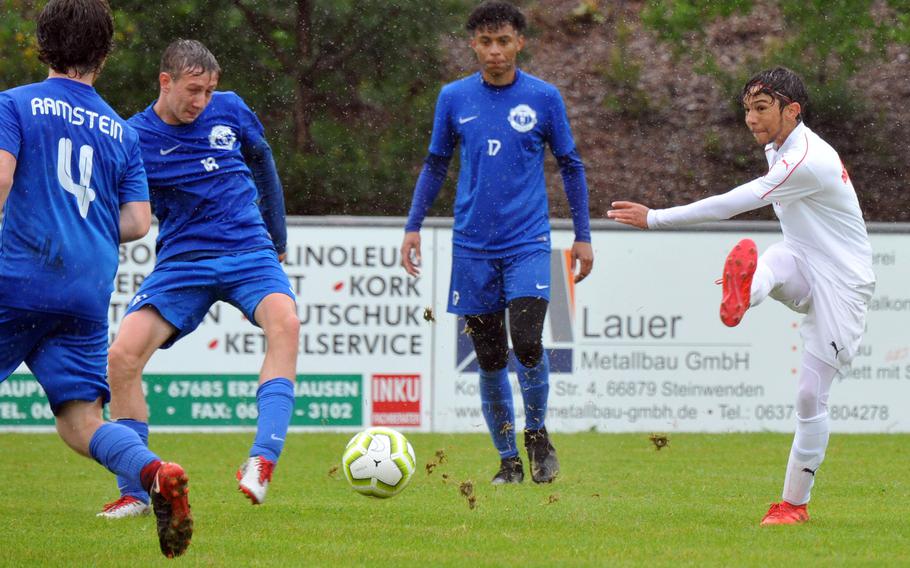 Kaiserslautern's Jalen Tate gets off a shot against Ramstein's Jacob Szczygiel, Benjamin Brewster and Tamar Holmes, from left, in a Division I game in Reichenbach, won by the Royals 4-0. (MICHAEL ABRAMS/STARS AND STRIPES) 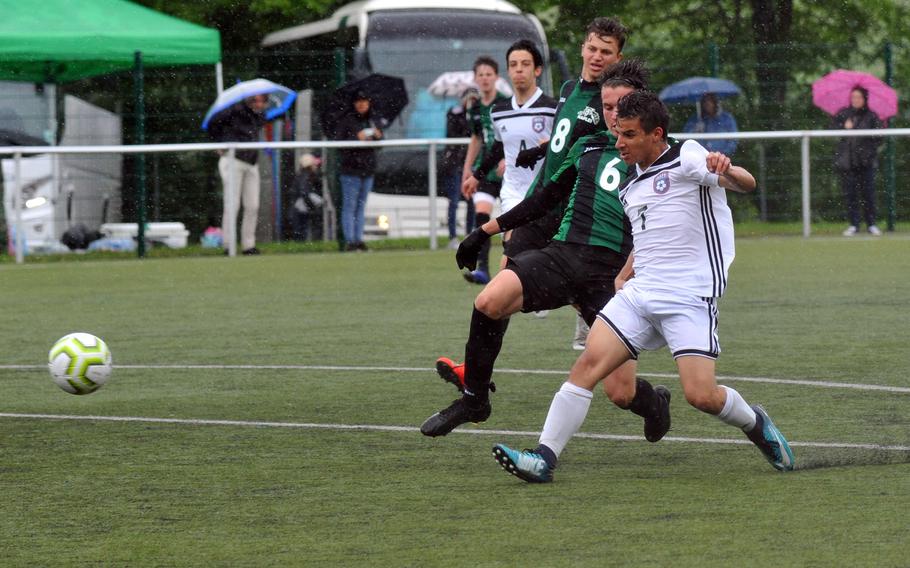 SHAPE's Alvaro Acebal gets past Naples' Nicholas Sherer to score a goal in a Division I game in Reichenbach that ended in a 2-2 tie. Following the action are Naples' Ben Sweeney and SHAPE's Joseph Kraemer. (MICHAEL ABRAMS/STARS AND STRIPES) 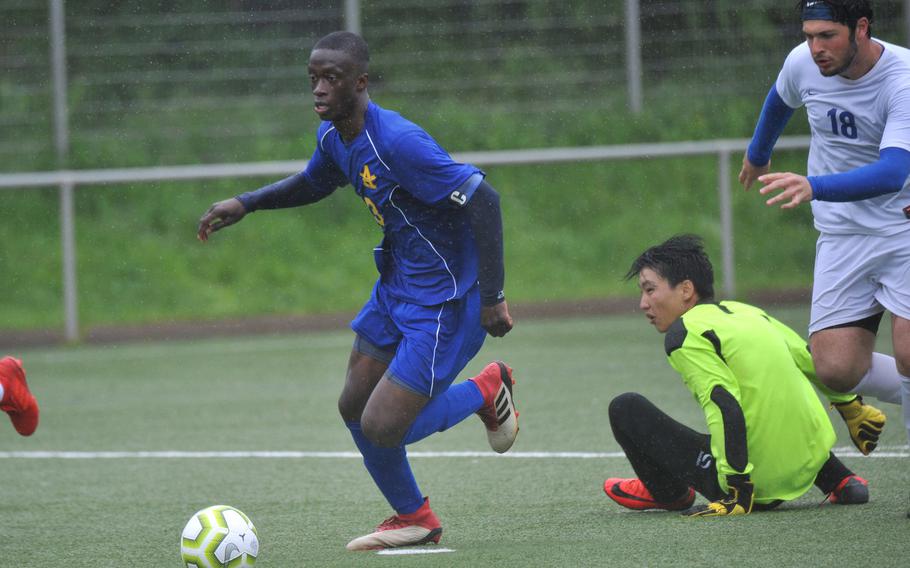 Ansbach's Kevin Kamara on his way to scoring a goal after getting past Brussels' Alimzhan Bazeken and Volkan Ceylan in a Division III game in Landstuhl, Tuesday, May 21, 2019. Ansbach went on to win 5-0. (MICHAEL ABRAMS/STARS AND STRIPES)

The semifinalists are set in the DODEA-Europe Division I and II boys soccer championship tournaments after a second day of preliminary play streamlined the divisions’ 16 contenders to eight.

The top-seeded Naples Wildcats face the Wiesbaden Warriors in one Division I semifinal, while the Ramstein Royals will take on the SHAPE Spartans in the other.

Division IWiesbaden 4, Lakenheath 0: The second-seeded Warriors blanked the seventh-seeded Lancers to reach the elimination round.

The shutout win completed a pool-play turnaround for the second-seeded Warriors, whose postseason got off to a rocky start when they fell far behind rival Ramstein early in Monday’s opener. Wiesbaden’s comeback fell short in a 3-2 loss to the Royals, but the Warriors have been solid ever since, besting defending champion Kaiserslautern 4-1 on Monday and clinching their spot in the semifinals at the Lancers expense.

“We knew we needed to win the rest of our games or we wouldn’t go through,” said junior Asa Moncivais, who scored one of Wiesbaden’s goals against Lakenheath. “That was our motivation.”

Next up is a rematch with Naples, the only team to beat the Warriors in the regular season. Naples, long on the cusp of a championship breakthrough, made a statement April 26 with a 4-1 defeat of the Warriors. But Moncivais believes Wiesbaden has found a recipe for continued tournament success.

“Play how we played this last game,” Moncivais said after the Lakenheath win. “Keep moving the ball, keep communicating, keep being more aggressive when the ball is in the air. I think that will get us through.”

While Ramstein ousted neighbor Kaiserslautern with the win, the Royals came into the postseason fueled by their recent setbacks to Wiesbaden. The Warriors beat Ramstein in the 2018 third-place game, then handed the Royals their only loss of the regular season, a 2-1 decision on April 20. Ramstein earned a measure of revenge with its 3-2 defeat of Wiesbaden in Monday’s pool-play meeting.

“That was our motivation, to come in and beat them,” Ramstein’s Jaden Buelvas said.

The Royals cruised past Kaiserslautern and handled Lakenheath 2-0 late Tuesday to secure the pool’s top seed.

Both Naples and SHAPE were assured of berths in the elimination round well before the afternoon match kicked off thanks to their overwhelming efforts on Monday.

The Wildcats routed Vilseck 6-1 and blanked returning runner-up Stuttgart 2-0. SHAPE earned two shutout wins, a 2-0 decision over Stuttgart and a 4-0 defeat of Vilseck.

Naples enters what could be its final two games of the season as the only unbeaten boys team in DODEA-Europe.

AFNORTH edged the familiar Falcons late Tuesday afternoon in the third neutral-site meeting between the two schools. AFNORTH beat BFA 3-1 on April 6 on the same Kaiserslautern High School field on which they played Tuesday; BFA evened the season series with a 4-1 win May 4 at Wiesbaden.

Seventh-seeded Florence claimed the pool’s other semifinal berth on the strength of a 3-2 win over sixth seed Rota on Tuesday. Florence shook up the bracket immediately on Monday with a 3-2 upset over BFA.

The late Tuesday matchup between AFNORTH and Florence will determine semifinal matchups.

No. 1 seed American Overseas School of Rome and No. 4 Aviano outlasted Bahrain in the opposite pool, a tidy three-team group.

While AFNORTH has three Italy-based opponents to fend off over the next two days, it won’t have to deal with one particular rival from the country. Marymount, a perennial contender that AFNORTH toppled for the 2018 crown, didn’t participate in this year’s tournament.

Division IIISigonella 2, Spangdahlem 1: No finalists are set in the seven-team small-school ranks, which completed the second of three preliminary days Tuesday.

The Sigonella Jaguars have emerged as the breakout team in the round-robin tournament, improving to 4-0 late Tuesday as they beat Spangdahlem 4-2 on penalty kicks.