Kadena freshman Javinia Riddick has averaged 19 points and 10 rebounds a game and helped the Panthers win nine of their first 10 games this year. (Dave Ornauer / S&S)

Kadena freshman Javinia Riddick has averaged 19 points and 10 rebounds a game and helped the Panthers win nine of their first 10 games this year. (Dave Ornauer / S&S) 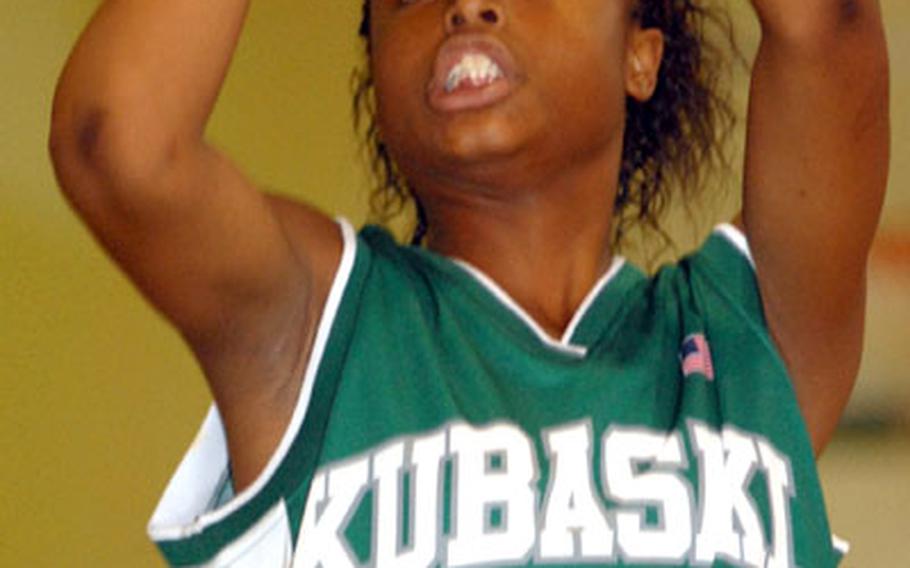 Kubasaki freshman guard Mechi Fletcher has averaged 22 points and six assists in helping the Dragons get out to a 5-5 start this season. (Dave Ornauer / S&S)

Yet a freshman trio led by starting swingman Javinia Riddick is fitting in nicely with the Kadena Panthers, who are 9-1. The Kubasaki Dragons (5-5) have enjoyed contributions from point guard Jametria Fletcher.

Kadena coach Ken Hudson, who welcomed first-year guard Jazmine Baker and freshman forward-center Aja Walker to his roster, said: &#8220;We have some freshmen who will be impact players before this season is over and for years after that at Kadena.&#8221;

Riddick is averaging 19 points and 10 rebounds and the other freshmen could be starting soon, Hudson indicated, saying, &#8220;They really have potential.&#8221;

Riddick and Fletcher cut their teeth on hoops in vastly different environments.

Riddick spent the past six years playing recreational youth basketball and middle-school ball in Augusta, Ga. In her first go-round at Kadena, she said, &#8220;I didn&#8217;t expect to make the varsity. I expected to make the JV. Good news.&#8221;

Coaches tend to take a chance when they start freshmen at critical spots rather than going with established veterans or sophomore or junior benchwarmers from the season before.

&#8220;There is an inherent risk,&#8221; Driggs said, such as how well players hold up in the faster pace of high school ball, whether they get a &#8220;big head&#8221; when things are going well or suffer an on-court meltdown when things go wrong.

Fletcher is to transfer after the season to an as-yet-undetermined North Carolina destination. Hudson expects to keep his fab freshmen for at least three years.

With a core of three seniors this season, five more next season and Baker, Walker and Riddick possibly two seasons after that, he&#8217;s assured of good continuity within the Panthers&#8217; ranks.