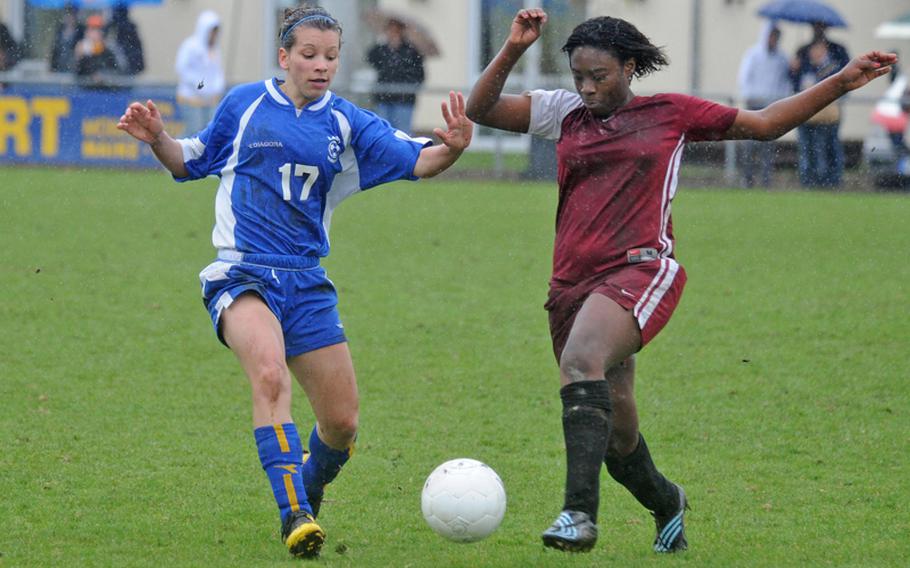 Buy Photo
Wiesbaden&#39;s Celina Ponte, left, and Vilseck&#39;s Josie Rodriguez fight for the ball in the season-opener for both teams on March 27. Both teams are in the same Division I pool and will meet Wednesday, opening day for the 2010 DODDS-Europe soccer championships. (Michael Abrams/Stars and Stripes)

KAISERSLAUTERN, Germany &mdash; The three DODDS-Europe girls soccer tournaments, which kick off at 8:30 a.m. Wednesday at seven area sites, possibly are headed to three dramatic finishes Saturday at Ramstein High School, thanks to the much-maligned system of regional scheduling.

Because the regional system segregates many divisional schools from one another, Saturday&rsquo;s finales, provided the seeds hold, could match powerhouses that have yet to meet this season.

Nowhere would that showdown be more epic than a potential clash between top-seeded defending Division I champion Ramstein against last year&rsquo;s runners-up, the No. 2 Patch Panthers. Region II champion Ramstein and Region III champion Patch bring legacies of past soccer success and 7-0-0 records into this event, and each tops its pool for the opening two days of this four-day event. They did not play during the regular season.

Below the top two, however, all first-time bets are off. No. 3 Wiesbaden and No. 4 Heidelberg each has fallen to Ramstein, and Heidelberg dropped its game against Patch, too. Both teams, however, are capable of turning things around, so if there&rsquo;s a rematch in the D-I title game, don&rsquo;t look for a replay.

As Ramstein boys coach Dan Nukala put it in a Tuesday e-mail describing his event, &ldquo;Everyone in Division I is a tough game. They&rsquo;re all out to win.&rdquo; Ditto for the girls.

There&rsquo;s a similar situation of a finals clash between strangers in Division II, where Black Forest Academy of Region III earned the No. 1 nod in spite of a 4-2-0 record, while Region IV champ Vicenza drew the No. 2, despite going 6-0-1.

If the seeds fail to hold in the 15-team D-II event, however, all the possible first-meeting excitement could go out the window. Nos. 3 and 4 Marymount and Naples, respectively, each fell to Vicenza this year and would love a shot at revenge on this side of the Alps.

None of the top four, however, has yet faced No. 5 AFNORTH, which is 5-1-1 going in. The Lady Lions will get their first shot against a top-four team when they face BFA at 5:15 p.m. Thursday.

Because there are just six schools entered in this year&rsquo;s D-III event, that tournament will be a straight single round-robin with the team emerging with the best record earning the title.

The seeds don&rsquo;t have to hold in this division to arrange a first-time meeting between the top two in Saturday&rsquo;s finale. No. 1 Brussels, the D-IV champion in 2009, is scheduled to play No. 2 Sigonella in Saturday&rsquo;s 10 a.m. final D-III pool-play game at Ramstein High School.

Whether that game will be the equivalent of a title-game showdown is uncertain, however, according to Alconbury coach David Claassen, who sees a competitive event up and down the line.

&ldquo;The quality of play has been outstanding&hellip;,&rdquo; he e-mailed Monday in assessing his team&rsquo;s event. &ldquo;For the first time in years, I feel like the teams are pretty evenly matched and any of them could come out as champions.&rdquo;