Female lineman dishing it out for Yokota football team 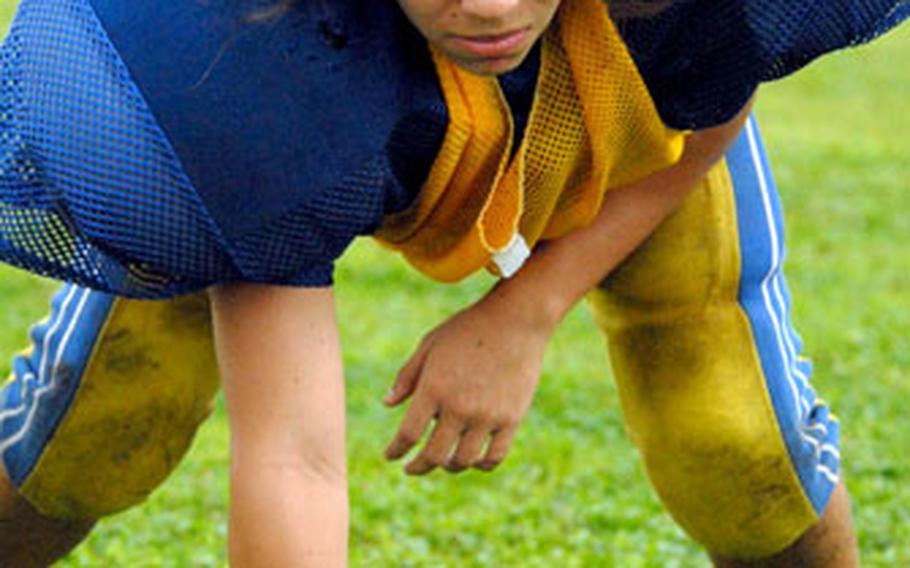 Senior guard/linebacker Samantha Little is Yokota’s only four-year player, and of the four girls that have played varsity football in the Pacific since 1995 she is the only one to play an interior line position. (Dave Ornauer / S&S)

Senior guard/linebacker Samantha Little is Yokota’s only four-year player, and of the four girls that have played varsity football in the Pacific since 1995 she is the only one to play an interior line position. (Dave Ornauer / S&S) Just one of the guys: Yokota linemate Corey Reich says Samantha Little is a welcome addition to the Panthers football team. “She hits hard,” Reich says. “She gives it everything she’s got.” (Dave Ornauer / S&S)

YOKOTA AIR BASE, Japan &#8212; Of the four girls who donned helmets and pads and played varsity football at Pacific high schools in the past 11 years, none has been in the middle of the action like Yokota&#8217;s Samantha Little.

The only Panther who&#8217;s been with the program, varsity and JV, for four years, Little plays the hit-and-be-hit positions of guard and linebacker. And her coaches and teammates say the senior isn&#8217;t shy about taking and doling out punishment, nor is she trying to make a feminist statement.

It&#8217;s an assessment with which Little agrees. The 5-foot-6, 145-pounder began playing football while in middle school in Virginia, again playing guard, and said the notion of being a girl playing a nominally boys game never once fazed her.

Liz Dolan, a soccer player, went 7-for-7 on extra-point kicks and just missed a 30-yard field goal for the Zama American Trojans in 1995. Monica Holman became the first Pacific-area player to run for a touchdown in 2004 for Zama. And Michelle Daniel lined up at wide receiver for the Kubasaki Shogun of Okinawa in 2003 and 2004.

None of them took the type of risk that Little takes by lining up in the trenches.

&#8220;When she first came out as a freshman, I had a discussion with her and said if she was a female and an athlete, there might be other sports that would benefit from her presence, cross country, girls volleyball, tennis,&#8221; Pujol said. &#8220;But there was no second-guessing it. This was where she wanted to be.&#8221;

From her middle school days to the present, Little said she never thought about danger, only about the team.

&#8220;When you try out for a team, they put you where you&#8217;re needed most,&#8221; said Little, who started out at Yokota playing guard as a freshman, tight end as a sophomore and guard and linebacker last year on the JV.

What of her teammates? Any resentment having a girl suit up alongside them?

&#8220;We fully accept her,&#8221; said Corey Reich, a junior center who lined up next to Little in last year&#8217;s JV offense and says Little goes all-out on the gridiron, in practice and in games.

By Kanto Plain rules, as a senior Little had to play varsity football or not at all. &#8220;I told her if she did come out, she would have to play at a whole new speed, a whole new level, and I would support her in whatever she decided to do. She stuck with it,&#8221; Pujol said.

Reich, among others, said Yokota&#8217;s opponents will find out in short order that Little is anything but window dressing in a program that&#8217;s as thin in numbers as it&#8217;s been in years.