FEAC chief Hobbs looks back at first 12 months as time of observing, change 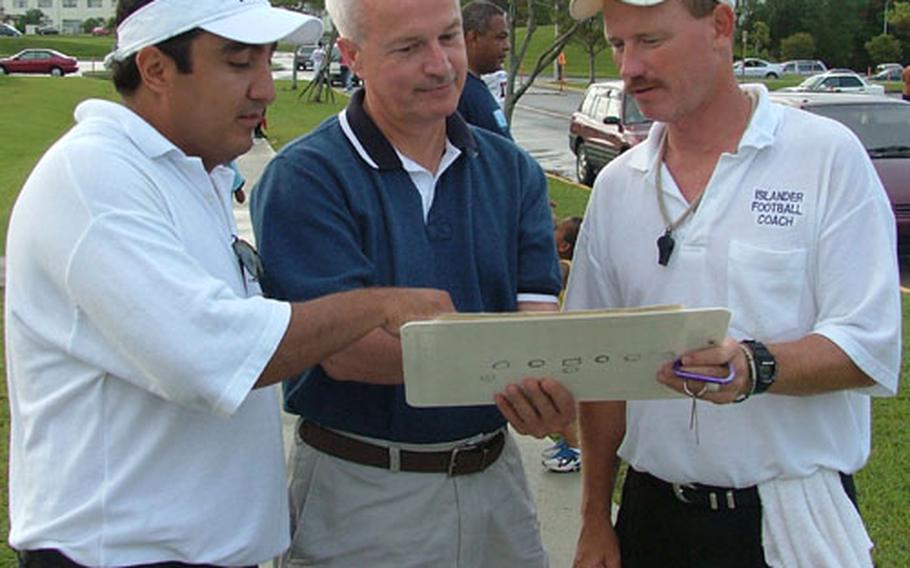 TORII STATION, Okinawa &#8212; Don Hobbs had said that his first year as Far East Activities Council chair would be one of &#8220;observing.&#8221; But when the former basketball coach and tournament director at Okinawa&#8217;s Kubasaki High School observed something needing to be fixed, he acted.

Tennis and cross country became annual, instead of biennial, Far East events. A 13th weight class was added in wrestling. And Far East soccer was moved to mid-May, away from late April, to resolve Japan Golden Week travel and Advanced Placement test conflicts.

Hobbs, 55, promoted last year to the FEAC chair&#8217;s position, shies from any suggestion that he was solely, or even chiefly, responsible for the changes.

The nine-member panel, representing each of the four DODDS-Pacific districts, meets twice yearly on Okinawa. Before the meeting, FEAC members seek ideas and agenda items from their school administrators, coaches, athletics directors, even parents.

Part of the discussion at a FEAC meeting last October was how to finance tennis and cross country as annual sports. That they are both &#8220;lifetime&#8221; sports was important, Hobbs said.

FEAC&#8217;s solution was to reduce the number of participants in boys and girls basketball and soccer from 11 to 10.

As for the immediate future, Hobbs said he sees no glaring issues that need repair. Athletic directors seem to agree.

Instead of more changes ahead, Hobbs envisions some fine-tuning. He plans to send out what he calls a Far East event checklist, covering everything from billeting to transportation to awards, programs and pre-publicity as a guideline for event directors.

Billeting, in some locations, &#8220;can pose a problem,&#8221; Hobbs said. Last year, boys Class A basketball at Osan Air Base, South Korea, was pushed back a week, as was the wrestling tournament at Yokota.

&#8220;We have to be flexible,&#8221; said Japan district superintendent Bruce Derr. &#8220;Principals need to work with their respective commanders, keep positive relations and continue to work on student behavior.&#8221;

Increasing competitive opportunities is perhaps the main reason Hobbs says he took the job and why he loves it.

&#8220;I&#8217;m a firm believer in the role that extracurricular activities play in . . . developing students. It&#8217;s very easy for me to support in any way possible,&#8221; he said. &#8220;I want to make sure things continue to move smoothly and be proactive in preventing anything that can go wrong.

Other topics discussed by Far East Activities Council chair Don Hobbs and others in a wide-ranging interview Thursday:

Hazing: Came under the national spotlight last fall when the football season at Wellington C. Mepham High, Bellmore, N.Y., was suspended last year after a hazing incident at a summer camp in Pennsylvania.

&#8220;If it does happen, there will be consequences,&#8221; added Japan district superintendent Bruce Derr. Punishments will include &#8220;no travel, no participation at Far East, no awards; their punishment may spill over into the next sport season,&#8221; he said.

&#8220;There&#8217;s been some talk&#8221; of a unified Kadena Panthers or Kubasaki Dragons team representing Okinawa at Rising Sun, Hobbs said.