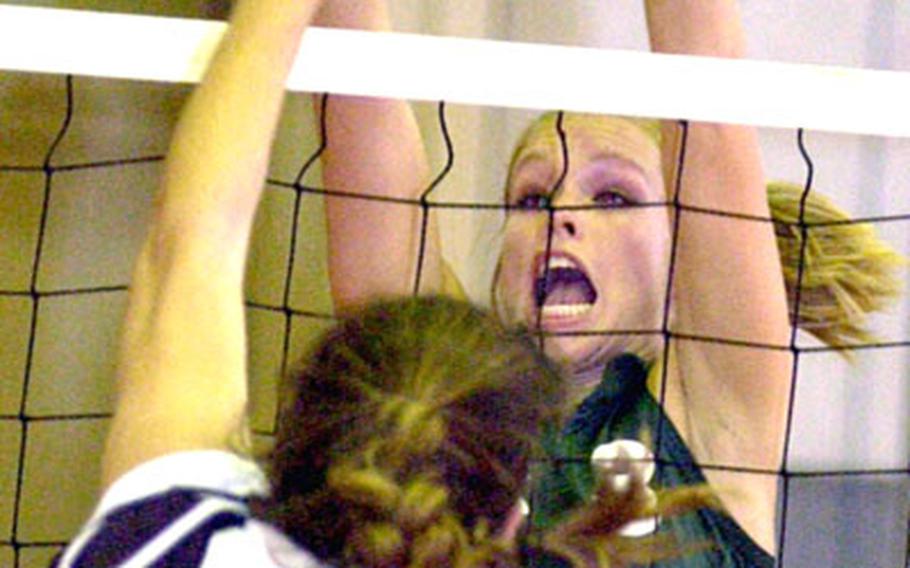 Kubasaki senior middle blocker Alex Fernandez blocks a shot by Erica Kerr of Kadena during Wednesday&#39;s volleyball match at Camp Foster. Coach Terry Chumley says Fernandez&#39;s skills have helped the Dragons become as strong a team as she&#39;s had in her five years at Kubasaki. But track and field, specifically pole vaulting, will likely lure Fernandez back to Woodland High School in California. (Dave Ornauer / S&S)

On Okinawa, skilled senior middle blocker Alex Fernandez transferred from California to Kubasaki High School &#8212; and helped transform the Dragons into a powerhouse that rivals Kubasaki&#8217;s 1983 and 2001 Final Four squads.

How far can Taegu American go in next week&#8217;s Far East Class A tournament at Sasebo Naval Base, Japan?Can Kubasaki achieve two Final Four finishes in four years in the Class AA tournament on Yongsan Garrison in South Korea?&#8220;If we put all the pieces together and keep working as we have, and improve every day while we&#8217;re in Seoul, we have a legitimate shot,&#8221; Kubasaki coach Terry Chumley said.

The Warriors, two other South Korea Class A teams and three from Japan begin the five-day journey to Center Court on Monday at E.J. King School and at Sasebo&#8217;s Fleet Gym. The Dragons and six teams from Japan, South Korea, Okinawa and Guam play the six-day Class AA tournament at Seoul American&#8217;s Falcon Gym and the Collier Field House on Yongsan&#8217;s South Post.

Taegu teams have had such talent before but also tended to fall apart in the clinch. Not now, first-year coach Jennifer Sharp said.

At Kubasaki, Chumley credits improved &#8220;speed and teamwork by all the players, across the board&#8221; for the Dragons&#8217; sweep of the Okinawa Activities Council three-match season series with Kadena.

&#8220;We have strong hitters and good offense, with good passing and setting,&#8221; he said. &#8220;Our basic skills are good this year. Our consistency is quite good.&#8221; And Fernandez, in addition to being a force at the net, also can play all positions on the court.

Besides their DODDS opponents, Taegu and Kubasaki must face international school teams &#8212; which, unlike DODDS teams, can &#8220;keep people from middle school until they graduate,&#8221; Chumley said, and so have tended to dominate Far East tournaments.

International school teams can be beaten, Chumley said, but &#8220;you have to do a lot of team building and maintain consistency in a short amount of time. Volleyball is seasonal for a lot of these (DODDS) players.&#8221;

The six-day week will go far toward building that for any DODDS team, he said. &#8220;Any team needs to do more talking and get more time on the court. Consistency will determine how well a team will do.&#8221;

An ability to bounce back from what Sharp termed the &#8220;huge disappointment&#8221; of Taegu&#8217;s third-place KAIAC tournament finish also will be a factor in her team&#8217;s chances, she said.

&#8220;I hope the experience (they) have under their belt (and) the fact that they were so close to a KAIAC title will be a contributing factor&#8221; to a better result this time.

She also predicted what victory will require: &#8220;Never underestimate any team. Believe in yourselves and each other, play aggressively 100 percent of the time and leave your heart and soul out there on the court.&#8221;

Robert D. Edgren (coach Sarah Richardson, 16th year) &#8212; Will be hard-pressed to replace the power of graduated hitter Arlie Boera and all-around stars Stephanie Patrick and Langley Yard, but will still be competitive, dropping to the Class A level and with senior sisters Valerie and Veronica Jones leading the way.

E.J. King (coach Michael Seitz, seventh year) &#8212; As usual, Seitz fields a team of short, scrappy defensive players who can somehow elevate at the net and cover the court like a blanket, trying to frustrate the opponent into mistakes. No height continually hurts this bunch.

Kubasaki (coach Terry Chumley, fifth year; ninth last year) &#8212; Watch out for this bunch; could be the best Dragons team Kubasaki has fielded in 22 years, thanks to the presence of senior transfer Alex Fernandez (Woodland, Calif.). Raelene Tajalle is more than a capable setter and Katie Leonard and Brittany Fultz can be dangerous in the middle and outside. Potential Final Four team.