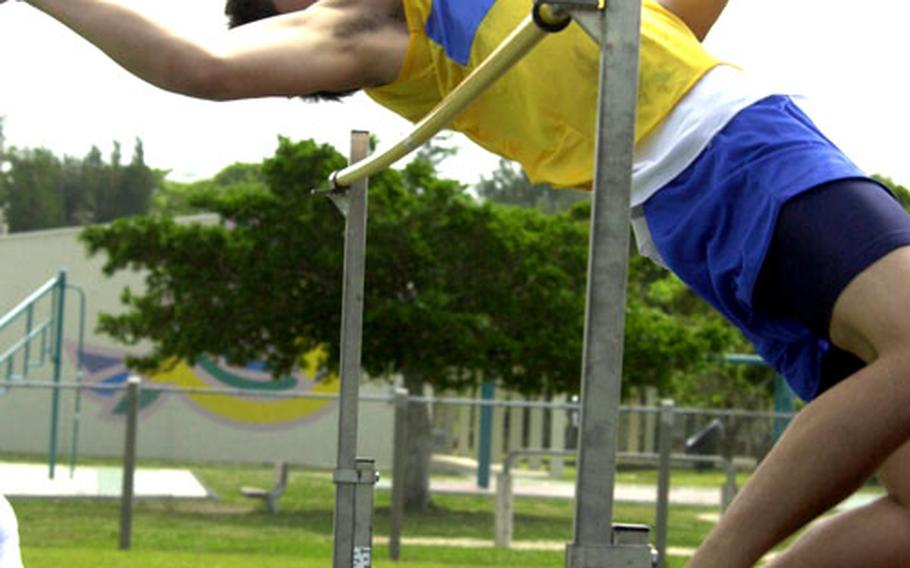 St. Mary’s International’s Jun Dambara sets a meet record in the high jump during last weekend’s Mike Petty Memorial meet, the only event which gathers most of the five participating DODDS track schools. Unlike soccer and basketball, track teams are not funded by DODDS-Pacific, which is one of a few impediments to conducting a season-ending Far East meet. (Dave Ornauer / S&S)

CAMP FOSTER, Okinawa &#8212; Charles Burns has watched for years while students in the Pacific compete in fully funded season-ending Far East tournaments, many in faraway locales.

The track and field coach of Kubasaki High School wonders why track has been left out of the equation.

He was speaking after last weekend&#8217;s third installment of the Alva W. &#8220;Mike&#8221; Petty Memorial Track and Field Meet, his brainchild and perhaps the closest thing to a regional Far East track meet. It has involved DODDS schools Kubasaki and Kadena of Okinawa and Nile C. Kinnick of Japan, international schools from Tokyo and, last weekend, Guam&#8217;s first entrant, John F. Kennedy.

The entrants for the Petty meet must pay for travel to Okinawa &#8212; at least $500 per head for airline tickets &#8212; find billeting (if available) and furnish just about anything else one can imagine for a weekend away from home.

All such expenses are paid by DODDS-Pacific in Far East events.

Besides Kubasaki, only Kinnick, Kadena, Yokota and Zama American high schools have DODDS-Pacific track programs. Guam High&#8217;s few athletes compete as members of Kennedy&#8217;s team. And Camp Casey &#8212; not located near a DODDS school &#8212; has the only regulation 400-meter track on a U.S. military base in South Korea.

During a FEAC meeting in February, a group of track coaches, headed by Yokota&#8217;s Matt Grant, proposed returning the sport to the FEAC calendar, Hobbs said, but &#8220;no recommendation was made.&#8221;

So, coaches and DODDS officials say there&#8217;s little prospect of funding for track and field unless more schools participate.

Said Kinnick coach Matt Martinez: &#8220;Any activity, no matter how big or small, academic or athletic, if it benefits the kids, then it should be pursued. I would like to see a Far East, to have that kind of competition on a big stage &#8230; and to get them a look for scholarships.&#8221;

Some coaches and students believe they shouldn&#8217;t have to wait.

Said Burns: &#8220;What if only five schools have Model United Nations? You go ahead and have it because it keeps kids involved.&#8221;

Track coaches also argue that, unlike baseball or football teams, track and field teams can be equipped inexpensively.

Martinez said a Far East meet could be staged much more quickly than basketball tournaments, which occupy one week.

The Petty meet is the only one a DODDS-Pacific school stages that involves athletes outside of Okinawa.