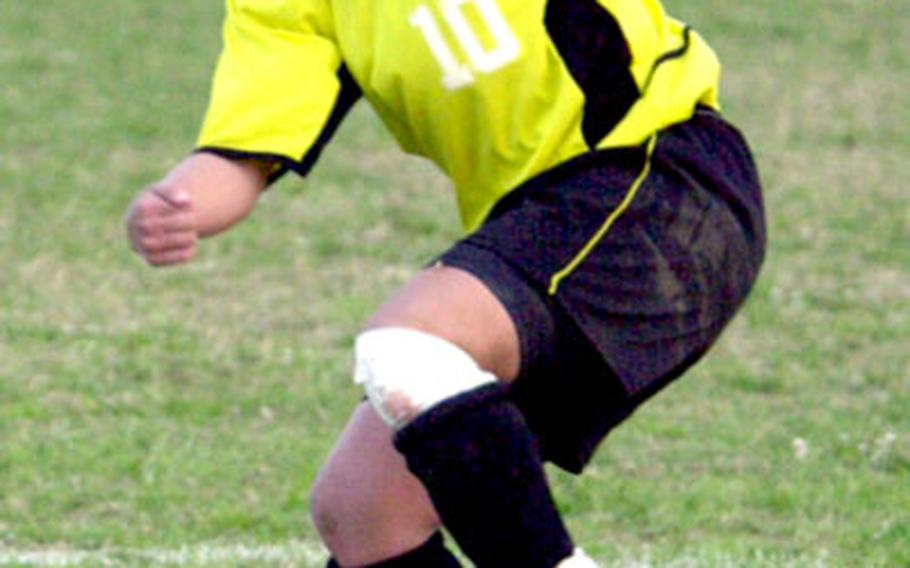 Thanks to the scoring of senior Dianne Abel and junior Jen Abel, Kadena&#8217;s high school girls soccer season began pretty much the way the last two finished, with a victory over Okinawa archrival Kubasaki.

Dianne Abel scored goals late in each half and Jen Abel got the team&#8217;s first goal of the season in the sixth minute to power the two-time defending Far East Class AA champion past the Dragons 3-1 at Kadena Air Base&#8217;s McDonald Stadium.

Dianne tipped her hat to teammates who helped create the scoring opportunities.

The matchup pitted teams that played in the last two Far East Class AA title games, with Kadena winning 3-2 in a May shootout at Kubasaki and 2-0 in the 2004 championship at Camp Zama, Japan.

This time, a well-stocked veteran Kadena team went up against a Dragons squad that was strong defensively but which lost virtually all of last season&#8217;s scoring power.

Jen Abel took a feed from Niki Kauzlarich and scored in the sixth minute. Kubasaki answered quickly, as Kara Koeneke, one of several Dragons freshmen, caught Kadena goalkeeper Helen Schrock leaning the other way on a crossing shot up the middle that hit the corner of the net in the 18th minute.

Dianne Abel put Kadena in front to stay, taking a pass from Alicia Larson in front of the net and beating freshman goalkeeper Stephanie Ramirez to her left in the 30th.

It stayed 2-1 Kadena, thanks in large part to Ramirez, a newcomer in goal who stopped 12 second-half shots, including seven from point-blank range by Dianne Abel. Finally, Abel angled a shot from the right side way over Ramirez&#8217;s head into the net in the 78th minute to ice the contest.

Kadena&#8217;s and Kubasaki&#8217;s boys fought to a scoreless tie in another battle of defense and missed opportunities.

The injury occured just before halftime with Seoul American leading 2-0. It left the Cougars (1-4) with only 12 players to suit up for Saturday&#8217;s home match with league-leading Seoul Foreign (5-0).

At Sasebo Naval Base, Japan

At Osan Air Base, South Korea

Edgren 3, American School In Japan B 0

At Osan Air Base, South Korea