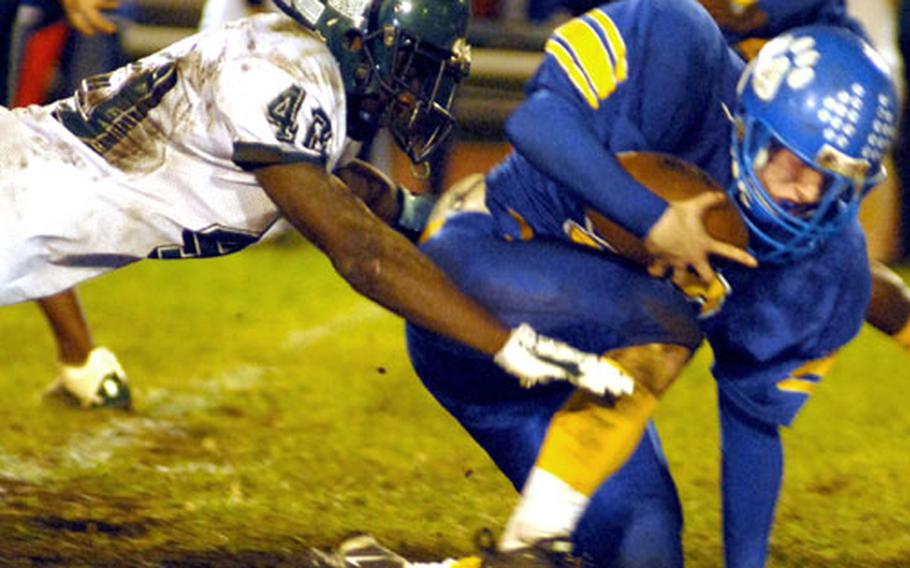 Kubasaki running back Marquette Warren (40) reaches back for a fumble recovered by Andrew Conkling of Yokota during Saturday&#39;s game. (Dave Ornauer / S&S)

Kubasaki running back Marquette Warren (40) reaches back for a fumble recovered by Andrew Conkling of Yokota during Saturday&#39;s game. (Dave Ornauer / S&S) Kubasaki running back Colt Sadler (34) is wrestled down by Josh Lehnerd (56) and Rainey Daily (24) of Yokota. (Dave Ornauer / S&S) 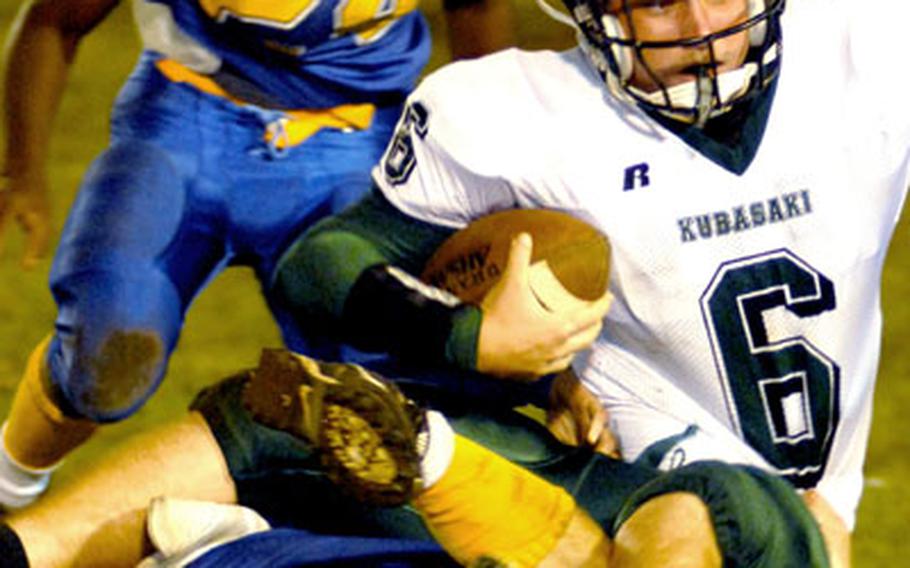 Joe Han missed his first field goal try of 38 yards in the second quarter. He made sure he didn&#8217;t miss on his second attempt, one that helped Seoul American escape upset-minded Taegu American and capture its fifth straight Department of Defense Dependents Schools-Korea football title.

At Yokota High School in Japan, there was no lack of scoring.

Anthony McNeill and Tony Presnell each scored three times and the host Panthers rolled up 382 yards in a 51-21 romp over Kubasaki in the first regular-season game between Okinawa Activities Council and DODDS-Japan Football League teams.

Defense ruled the day, as Seoul American recovered five fumbles and intercepted two passes, the last one by Daniel Burns that halted the Warriors&#8217; final possession. The Falcons fumbled seven times, losing two on snap miscues between center and quarterback.

Kawika Feleciano led the Falcons with seven tackles, Joe McLean had six and Demetrius Johnson had three sacks. Burns went 11-for-16 for 88 yards to highlight the Falcons&#8217; offense.

The Warriors also missed a field-goal try, and had a 60-yard punt-return touchdown by Angel Hickman called back on a penalty. Taegu had the ball inside the Falcons&#8217; 10-yard line twice, only to fumble it away.

Harden rates the Warriors as a contender for the Far East Class A championship on Nov. 3.

JapanYokota 51, Kubasaki 21: At Yokota Air Base, McNeill, the defending JFL rushing champion, chewed up the Dragons for 148 yards on 27 carries, including touchdown runs of 1, 5 and 8 yards. He added 119 yards on three returns and caught two passes for 29 yards.

Kubasaki&#8217;s Marquette Warren replied with 111 yards on nine carries, including a 50-yard TD scamper. Colt Sadler scored from 3 yards out and Kaleb Robinson sneaked in from the 1. Michael Bennett garnered 164 all-purpose yards on 13 touches. But the Dragons were hurt by three turnovers.

While this was Yokota&#8217;s eighth game of the season, including two preseason matchups with Japanese teams, this was the first time Kubasaki took the field as a unit, after playing as split squads for four preseason doubleheaders.

Yokota (6-0) already has clinched a berth in the Far East Class AA semifinal at Guam High on Nov. 3. Kubasaki begins its best-of-three OAC playoff with Kadena next week, with the winner to host Seoul American on Nov. 3.

(Click to jump ahead to cross country, tennis and volleyball)