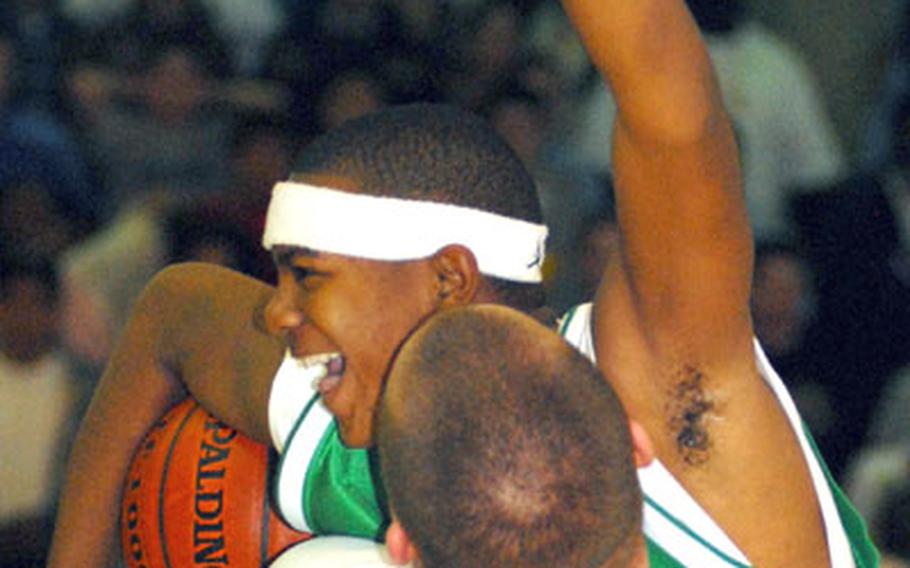 So it went during last month&#8217;s Far East tournaments &#8212; wrestling at Yokosuka Naval Base in Japan, boys Class AA basketball at Seoul American and girls Class AA hoops at Kadena on Okinawa:

Strong at the lighter and heavier weights, but short on mat preparation, Seoul American&#8217;s wrestling team won two gold medals and the freestyle and dual-meet team titles.Known for their hustle, teamwork and strong defense, Kadena&#8217;s girls, led by junior guard Brooke Hudson, unexpectedly showed a propensity for long-distance shooting as the Panthers overwhelmed American School In Japan 85-32 in the most lopsided girls Class AA tournament final in history.Thought to be rebuilding, with a first-year coach at the helm, Kubasaki&#8217;s boys, including tournament MVP Quinton Mason and rising star Jacorian Callier, took the lead role as the Dragons rallied time after time to capture the school&#8217;s 10th Class AA title and its first in 10 seasons.&#8220;Some players step up big in big-money games, and those are the players you want to have,&#8221; Kadena girls coach Ken Hudson said.

Seoul American&#8217;s wrestlers may have had the least amount of mat time of any team that has won a Far East tournament, particularly at the upper and lower weights, where the Falcons&#8217; DODDS-Korea League rivals Osan American and Taegu American fielded few opponents.

Other than wrestling Taegu and Osan six times, coming away with a 12-0 record, Seoul enjoyed one exhibition against a South Korean team. The Beast of the Far East tournament, normally held in late January at Yokosuka Naval Base, was called off due to a scheduling conflict.

&#8220;We didn&#8217;t see this coming,&#8221; coach Julian Harden said of championships won by a squad that fielded just three experienced Far East tournament wrestlers, only one of whom, Nutter, reached a gold-medal bout.

&#8220;I didn&#8217;t think we had that strong a team. There were so many different schools with stellar athletes at various weights. So, I figured if we had enough people who could place and we could take third or fourth, we would do OK.&#8221;

So, without much in the way of competition, Harden and his charges honed themselves to a fine edge by tossing each other around in the wrestling room, and entered Far East with a &#8220;no-quit&#8221; philosophy.

Behind Nutter&#8217;s gold medal and another by 180-pounder Justin Stokes, the Falcons edged 20-time Far East champion Kubasaki 62-58 for the freestyle team title, then dethroned defending champion Kadena 38-24 for the dual-meet crown.

The same could be said of a Kadena girls team that few expected to be as accurate from outside as it was &#8230; except perhaps for Hudson.

Freshman Aja Walker came off the bench to toss in 19 points.

Perhaps the most surprising development of tournament time was the rise of Kubasaki&#8217;s boys, picking up the pieces after losing seniors Steven Thompson, Vance Maxey and Steven Ellis to graduation and also with 29-year-old Jon Fick at the helm, replacing the late Chris Sullivan, who died last April.

A squad of mostly underclassmen went to the Hong Kong Invitational in November and lost five games, then went on to lose all four Okinawa Activities Council regular-season games to Kadena.

But beyond the Dragons&#8217; 11-12 regular-season record, a few bright spots shined. The Dragons showed an ability to come back &#8212; they rallied to beat Kadena 75-65 in the semifinals of the Okinawa-American Shootout in January &#8212; and they played Kadena close in their last two meetings.

&#8220;We knew we were going to take our lumps,&#8221; Fick said. &#8220;All the joy of winning and disappointment of losing, we kept our perspective, saw it all as a learning experience toward Far East. The Okinawa tournament was a glimpse of what we could do and that was huge for our confidence.&#8221;

But could Fick and the Dragons see coming a 76-75 Class AA overtime semifinal shocker against unbeaten Zama American and a 75-71 championship upset of host Seoul American, with Mason going 6-for-6 at the foul line in the fourth quarter and Callier scoring a career-high 26 points?