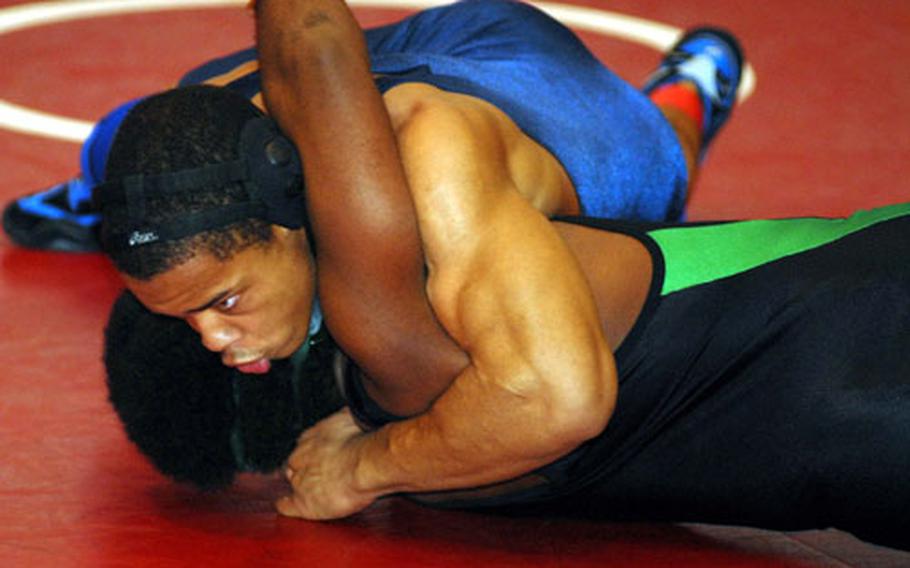 He had no idea, though, that his pinfall victory in 3 minutes, 10 seconds over Kubasaki&#8217;s Ricky Jones clinched the Falcons&#8217; first Far East title in the individual freestyle portion of the three-day tournament.

They rode gold medals by Stokes and 15-pounder James Nutter to the second Far East title in school history, outscoring Kubasaki 62-58 in one of the tightest finishes in the 31-year history of the tournament. Six points separated the top three teams, with defending champion Kadena third with 56.

The Falcons boast no true standouts, Harden said, &#8220;just wrestlers who work together and do their fair share, do their level best in their weight class and focus on the next match.&#8221;

Stokes said that was his mind-set going into his bout with Jones.

Those four words might have summed up Friday&#8217;s bevy of tournament firsts:

The victory capped a season of struggle in which Albaladejo began strongly but thought of quitting during a midseason slump. Teammates and assistant coach Jon Powell talked him out of it.

Guam High 101-pounder Dylan Pablo became the first Panther to win gold in the 10 seasons the school has fielded a team. The Panthers also achieved an island first by winning 11 medals.

Meanwhile, a handful of wrestlers who know their way around the gold-medal platform found their way there again.

Defending champions Bloom (148), Scott Wood (108) of Kubasaki and Phil Ergus (heavyweight) of Nile C. Kinnick made it two straight golds, while 2005 champions Brandon McCullough (141) of Kadena and Matt Maza (129) of Kubasaki returned to those heights after a year&#8217;s hiatus.