Buy Photo
Varsity shooters from Wiesbaden, Kaiserslautern and Baumholder prepare to fire from the kneeling position during a conference marksmanship competition in Wiesbaden, Saturday, Jan. 21, 2017. (Dan Stoutamire/Stars and Stripes)

Buy Photo
Varsity shooters from Wiesbaden, Kaiserslautern and Baumholder prepare to fire from the kneeling position during a conference marksmanship competition in Wiesbaden, Saturday, Jan. 21, 2017. (Dan Stoutamire/Stars and Stripes) 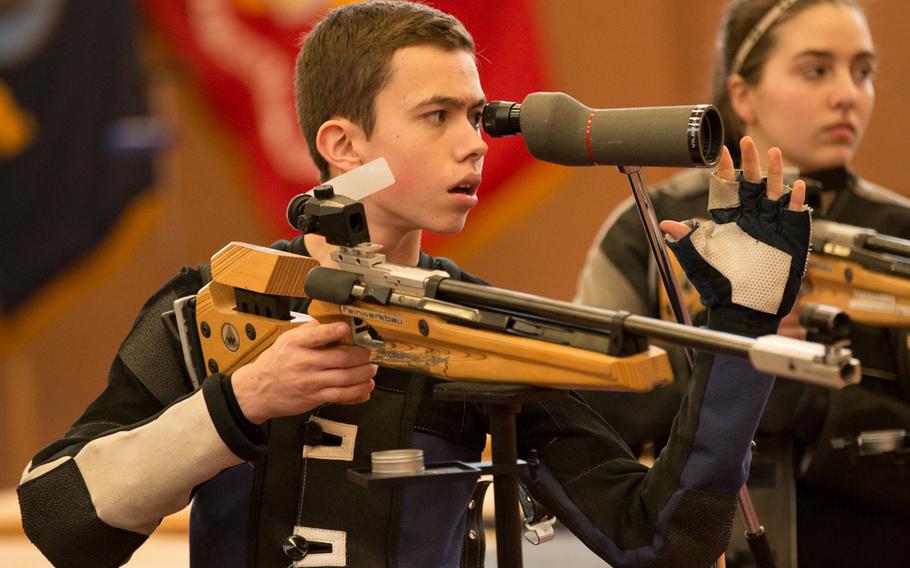 The more things change, the more they stay the same.

Stuttgart will compete for a fourth straight European marksmanship title Saturday at Vilseck in the first DODEA-Europe championship event of the 2017 calendar year. Kaiserslautern, Alconbury, Hohenfels and Wiesbaden join the Panthers and host Falcons in the six-team final field.

History - including both the last three years and the last two months - suggests Stuttgart is likely to continue its reign. The Panthers claimed their third straight title last January by a comfortable 49-point margin, and swept each of this year’s five regular-season meets.

Over the years, Stuttgart coach Raul Pinon has constructed an incomparably deep program from which to draw varsity talent, allowing the Panthers to immediately reload no matter how much attrition they suffer each offseason. The constant flow of quality shooters keeps every Panther performing close to his or her peak, lest they see their spot usurped by a hotshot newcomer.

“Our varsity and JV teams’ practice intensity level is always high,” Pinon said. “They ensure that every member of the team is pulling their share of the weight placed on their shoulders.”

That kind of consistency has been best embodied by junior standout Callum Funk. After earning a sixth-place finish at last year’s tournament, Funk has shot between 288 and 292 in every meet since Dec. 10.

But the Panther way is apparent across the Stuttgart roster. Pinon pointed out how freshman Ximena Soberon “proved herself” over the course of the season to earn the fifth varsity spot, the result both of Soberon’s hard work and the team’s “goal to collectively assist each other.”

While the Panthers look to collect another trophy, their five rivals are eager to end the streak.

Vilseck has been bumped to second in the east by Stuttgart, but the proud Falcons have made the Panthers work for every win. Vilseck, led by seniors Shelby Hartmann and Victoria Banister, hasn’t lost by more than 25 total points all season, and nearly pulled off the upset in the Jan. 21 regular season finale by posting 1,128 points to Stuttgart’s 1,136.

With that margin in mind, Falcons coach Mitchell Pollock plans for his charges to spend extra preparation time in standing and kneeling positions, which he called the two more challenging positions in the sport as opposed to the more manageable prone position. Pollock is eying a victory, and plans at the least to “put a serious hurt on Stuttgart” in the process.

“We have been just a few points behind them all season,” Pollock said. “I like to see (Pinon) sweat.”

While Stuttgart’s move eastward squeezed Vilseck from its top spot, the change also presented Kaiserslautern the opportunity to become the preeminent program in the west. The Raiders have done just that, winning all five of the conference’s regular-season meets.

“Overall it’s the strongest team we have had yet in our three years,” coach Robert Meyer said.

Junior Victoria Jackson has spent the season setting new benchmarks for the still-young program, including a new school overall record at 287.

Still, the Raiders’ steady rise isn’t likely to produce a title just yet. While Kaiserslautern swept the western conference meets, it ranks behind both Stuttgart and Vilseck in total points entering the tournament.

“We recognize it will be an uphill climb,” Meyer said. “We also believe our shooters have it within their talents to have a great day and place even higher.”

Eastern conference entry Hohenfels and western conference schools Alconbury and Wiesbaden round out the six-team field. Alconbury has managed to remain very competitive despite the loss of 2016 individual European champion Brittany Brann, posting runner-up finishes in both the first and last meets of the regular season.