Naples senior Sierra Dye tips the ball back over the net in at match against Vilseck on Friday, Oct, 7, 2016. (Kent Harris/Stars and Stripes)

Naples senior Sierra Dye tips the ball back over the net in at match against Vilseck on Friday, Oct, 7, 2016. (Kent Harris/Stars and Stripes) 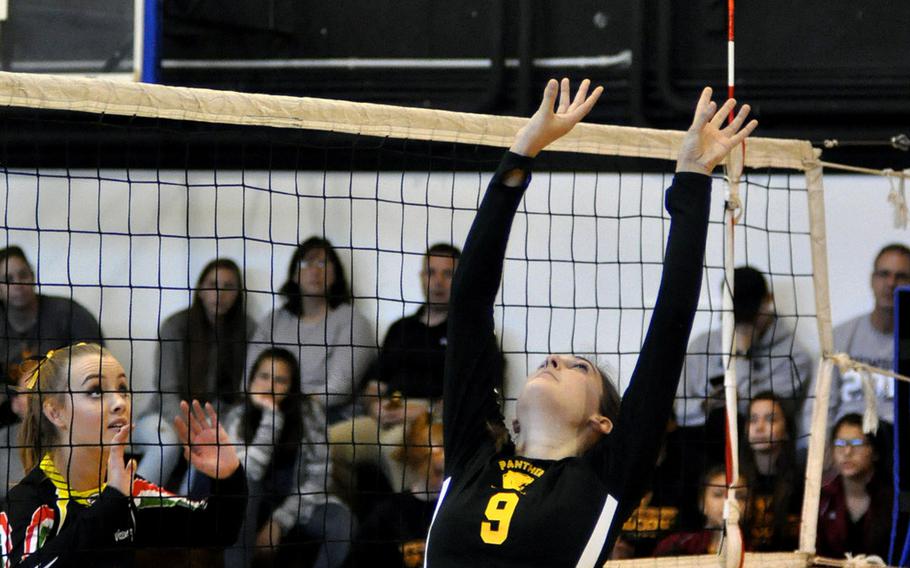 Stuttgart's Alexa Smith sets the ball behind her to a teammate during the Panthers' match with Vicenza on Friday, Oct. 7, 2016. (Kent Harris/Stars and Stripes) 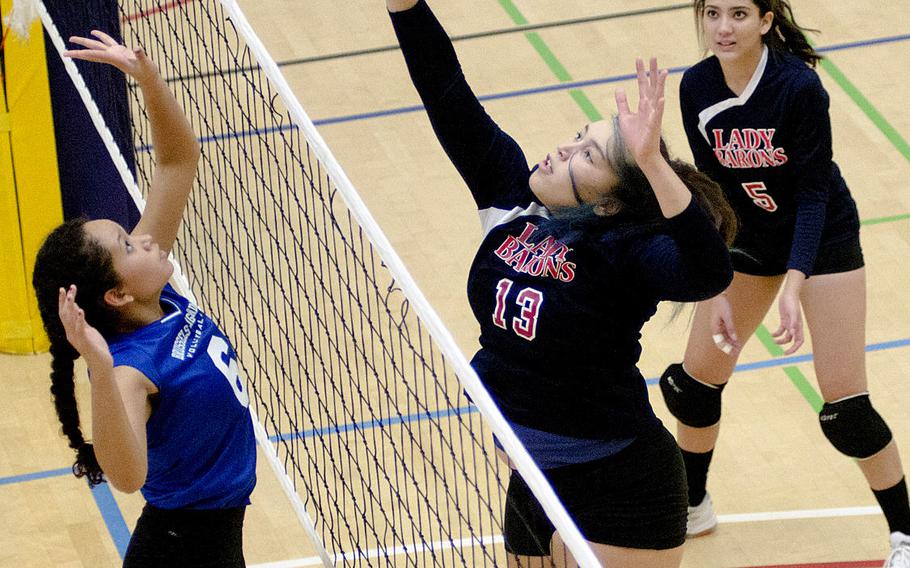 Bitburg's Elise Rasmussen, right, and Brussels' Gloria Hernandez vie for the ball over the net during their match Saturday, Oct. 15, 2016 at Spangdahlem, Germany. Brussels prevailed in five sets. (Dan Stoutamire/Stars and Stripes) Sigonella's Kristiana Wyrick tips the ball over the net against Ansbach in a match at Aviano Air Base, Italy, Saturday, Oct. 22, 2016. (Kent Harris/Stars and Stripes)

The Kaiserslautern Military Community plays host to the 2016 DODEA-Europe girls volleyball championships this week. The tournament opens Thursday and concludes Saturday with a slate of three European title games. Here’s a look at the battle for each divisional championship.

Division I The Stuttgart Panthers overlooked a crucial aspect of the typical rebuilding process. They forgot to lose some matches.

The Panthers got much of the process correct when they shed all but two of the players that delivered their historic 2015 European championship. But when the 2016 season opened, the youthful Panthers refused to take the expected step away from contention.

If anything, the Panthers have been better, going undefeated this year after finishing with one regular-season loss in 2015. That 13-0 record includes wins over local foes Ramstein and Wiesbaden and a sweep through Italy for wins over 2015 runner-up Vicenza and perennial contender Naples.

Three of those four schools will pile into the opposite pool from Stuttgart and compete for their eventual shot at the reigning champions.

As such, the Panthers are the No. 1 seed among the nine teams gathered this week in the DODEA-Europe large-school bracket. They’ll share a pool with No. 4 Lakenheath, No. 5 Vicenza and No. 8 SHAPE.

Vicenza remains dangerous, even though the Cougars have been swept by the Panthers twice over the last year, including last season’s title match and this October’s rematch. Lakenheath has the potential to pull an upset, as only a September loss to Ramstein prevented the Lancers from producing a perfect regular season.

The opposite pool runs even deeper. Naples gets the No. 2 seed atop the five-team bracket after defeating every non-Stuttgart opponents on its schedule, while returning semifinalists Ramstein and Wiesbaden check in at No. 3 and No. 6, respectively, in the dangerous group. Seventh-seeded Vilseck and ninth-seeded Kaiserslautern round out the Division I field.

Division II The Bitburg Barons have an opportunity this week.

A year after losing to the Rota Admirals in the European championship match, the Barons are the No. 1 seed and owners of an undefeated divisional record. The Admirals, meanwhile, appear very vulnerable; they went 0-3 in their limited DODEA-Europe schedule this fall - including a sweep at the hands of the Barons - and enter the tournament as the bottom seed in a nine-team bracket.

But history proves that the Division II tournament is rarely that straightforward. And this field is packed with teams capable of derailing the Barons’ best-laid plans.

Fourth-seeded AFNORTH and No. 5 Black Forest Academy share a pool with Bitburg, and each gave the Barons a hard time this season. Bitburg needed four sets to dispatch AFNORTH, while BFA forced a decisive fifth set before taking the loss. Eighth-seeded Marymount completes the four-team pool.

While Bitburg has experience with AFNORTH and BFA, the bracket’s other pool is mostly filled with unfamiliar opponents hailing from well outside of the Barons’ regional wheelhouse of Germany and the Benelux.

No. 2 seed American Overseas School of Rome and No. 3 Aviano are the headliners. The two schools split a pair of head-to-head matches early in the season and have since honed their craft against area powerhouses Naples and Vicenza, priming each for what should be a solid tournament run.

The two favored Italian programs will look to dodge upset bids by No. 6 Bahrain, which didn’t play a DODEA-Europe match this fall, seventh-seeded Florence and a proud Rota squad punching up from the No. 9 seed.

Division III Some of the participants in the annual small-school round-robin tournament have changed. But the major players haven’t.

Elsewhere in the six-team bracket, former Division II school Hohenfels drops down to replace closed Incirlik, while Ansbach, Baumholder and Brussels hovered around .500 in divisional play this fall and could string together enough wins to interlope on the title match.