Even without stars of 2003, Kinnick volleyball team has improved 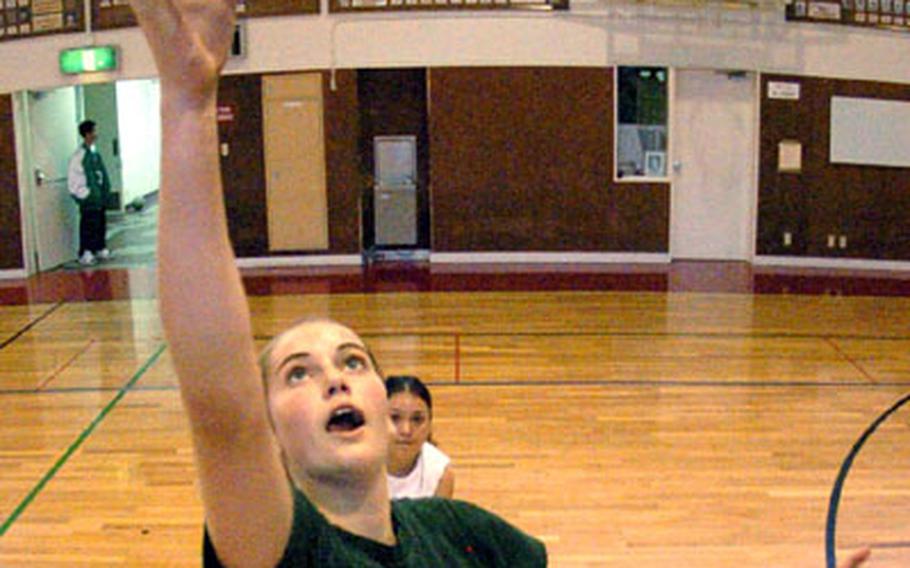 Erica Niemeyer might have found it tough to fill the void left by Alisa Gilson and middle blocker Carol Tully, who was one of Nile C. Kinnick High School&#8217;s best female athletes.

But instead of trying to follow their act, Niemeyer and the Red Devils have created one of their own this year.

After losing on Oct. 2 to Seisen International and falling to 6-5 overall, the Red Devils won eight consecutive matches before losing Saturday to Robert D. Edgren at Misawa Air Base.

Kinnick&#8217;s 14-6 record is a turnaround from last year&#8217;s 8-10 regular-season mark achieved with Tully, who graduated in June, and Gilson, who transferred.

The Red Devils have gotten contributions from every player, not just the stars.

&#8220;Not all the talent is concentrated on one person,&#8221; said Mariko Wood, a sophomore who has taken over the role of Jackie Jimenez, who set a season ago for Tully and Gilson. &#8220;Everybody has to do their job. Everybody is good at what they do.&#8221;

And it also has the team believing that good things are in store for next month&#8217;s Far East Class AA Tournament on Okinawa. Last year the team placed eighth, its best showing since finishing fourth in 1995.

Bold talk for a school that has just one final-four finish in a Far East Class AA tournament (1982).

&#8220;I think we realized what we needed to work on,&#8221; Wilkinson said of things such as court coverage, reading opponents&#8217; hits and not being predictable on offense.

&#8220;I see consistency, more so than at the beginning,&#8221; said Sarah Richardson of Robert D. Edgren, which lost a four-set season-opening match to Kinnick on Sept. 11 and lost two of three matches to the Red Devils last weekend.

The Far East Class AA tournament has been dominated by schools from Guam (10 titles) and the Tokyo area (eight). Only one DODDS-Pacific school, Zama American, has won a Class AA title (1979, 81, 88 and 97). Zama has finished second four times. Seoul American is the only other DODDS-Pacific school to reach Center Court, losing to Guam&#8217;s Academy of Our Lady in 1999.

Teams such as Seisen &#8220;know where every single hole is and can read your spikes like a book,&#8221; Wilkinson said.