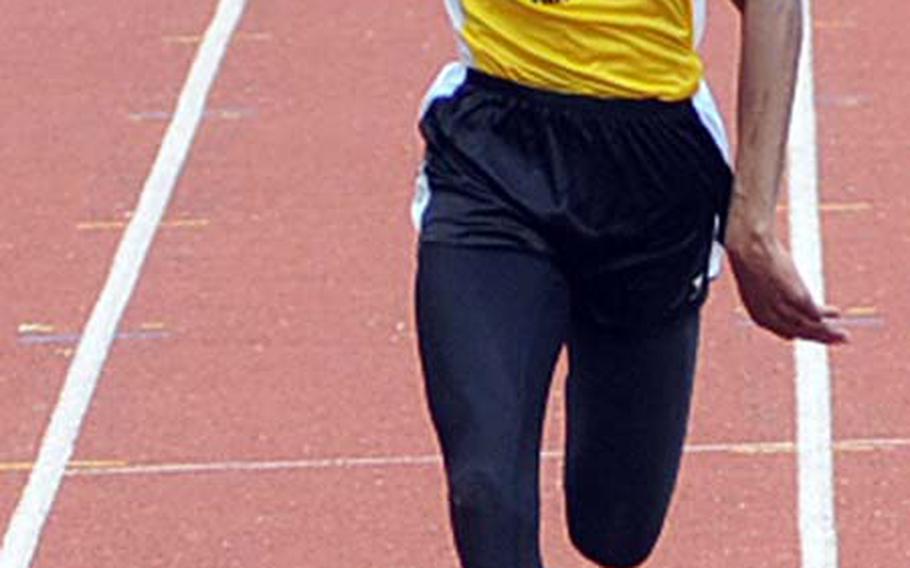 Tiffany Heard of Ansbach, competing in the 200 meters at the European track and field championships 2008, is the girls defending 100 intermediate hurdles champion. She hopes to retain that title and also win the 300 hurdles. (Peter Jaeger / S&S)

The fastest boy in DODDS-Europe and the unofficially fastest female hurdler in the school system&#8217;s history highlight the start of the high school track and field season Saturday.

Juniors Julius Johnson-Rich of Patch, winner of the 100, 200 and 400 meters in last May&#8217;s European track and field championship, and Tiffany Heard of Ansbach, winner of the 100 intermediate hurdles in the same meet, are out for more fields to conquer.

"I&#8217;m really excited about the season," Johnson-Rich said by telephone Tuesday. "My goal this year is to repeat on all three, but, either way, I&#8217;m trying to get my times better."

That will take some doing, almost as much as Heard&#8217;s task in reaching her 2009 goals. Heard, who also won the 300 low hurdles in the European championships, ran a 15.30 in the 100 hurdles on May 4, faster than the official record of 15.40. But DODDS-Europe records can be established only in the championships, according to Ansbach athletic director Mike Jimerson, so Heard&#8217;s still chasing that record.

For all his success on the track, Johnson-Rich said his passion is basketball.

"The only thing fun about track," he quipped, "is running in Spandex."

Bobbs will try her hand at the 200 this season in addition to her signature events.

The season begins Saturday at Ramstein, Vilseck and Wiesbaden, then goes into a spring-break hiatus until April 18. The European championships, again hosted by Wiesbaden, are scheduled for May 20-23 at the Ruesselsheim city track.