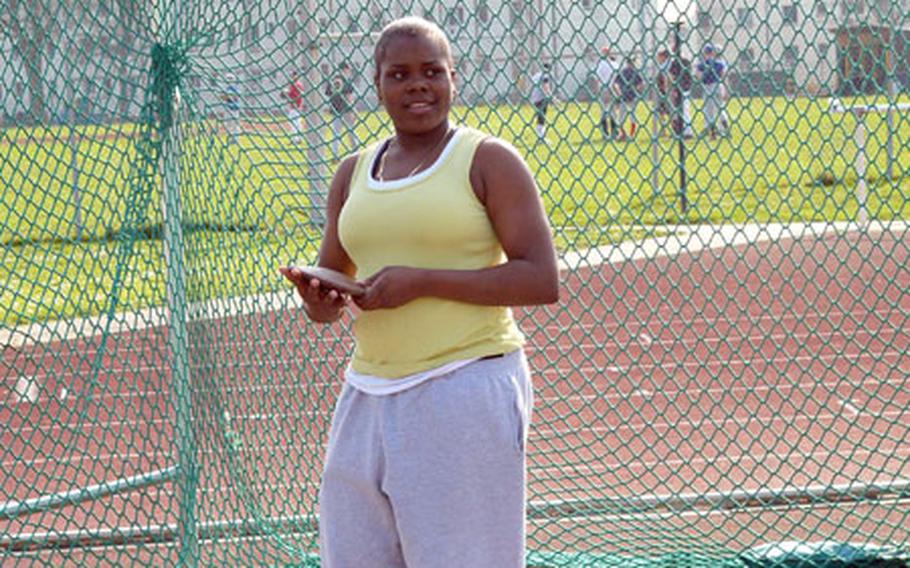 Heidelberg sophomore Jessica Blanks, the European shot-put champion, has her eyes on the discus gold medal this season. She is shown preparing to throw the discus during a practice session Tuesday at Heidelberg. (Rusty Bryan / S&S)

HEIDELBERG, Germany -- How in the world did Heidelberg sophomore Jessica Blanks manage to put the shot nearly 2 inches farther in a cold rain here Saturday than she did in winning the European championship in the event last May?

Intensive attention to footwork and release and all the other arcane details of the weight events at practice?

Years spent mastering the intricacies of the event?

Anything else that might explain how she tossed a personal-best 34 feet, 3 inches in a season-opening meet?

&#8220;That Johnson girl&#8221; is Wiesbaden junior Althea Johnson, second to Blanks in the Europeans by some 28 inches. Blanks was determined to have the pattern continue Saturday.

The competitive boost to Blanks&#8217; game doesn&#8217;t begin and end with Johnson. Family members and even Mother Nature get her competitive juices flowing.

And the family member?

Blanks, who also plays basketball, said she took up the shot last year at the urging of Heidelberg shot/discus performer Margaret Yakana.

&#8220;She had a firm handshake, so I told her she should come out for the team,&#8221; Yakana joked on Tuesday. That handshake agreement was all it took to get her started.

Blanks, who tossed the discus 94 feet Saturday, registered 100-4 in May in placing third in the Europeans. The two girls who finished ahead of her on the discus podium are gone this time around, but Blanks already has a competitive target in mind.