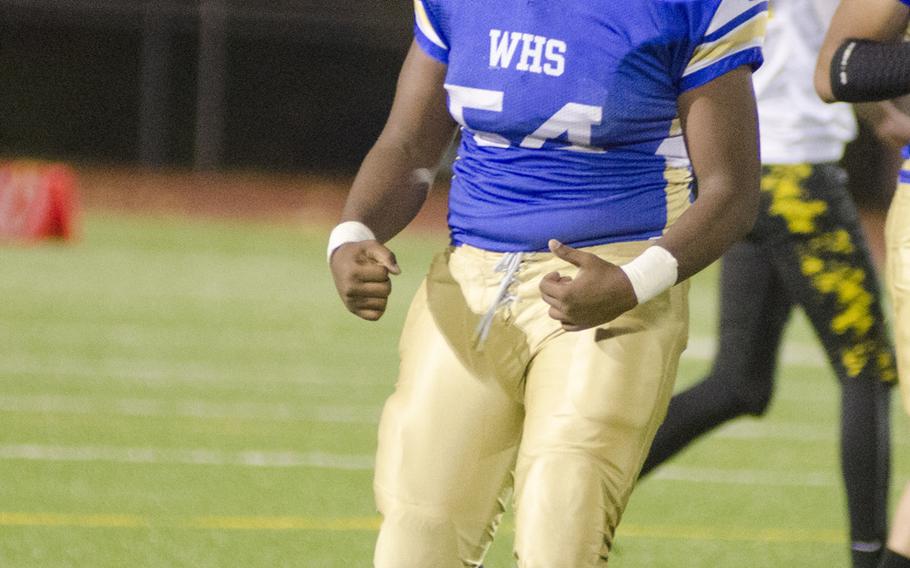 Daniel Williams, a senior defensive lineman for Wiesbaden, celebrates a big play in the second half of his team's game against Stuttgart on Friday, Oct. 23, 2015 in Wiesbaden, Germany. Wiesbaden came from behind with a dramatic 14-10 victory, ensuring a place in the DODD-Europe Division I high school football playoffs. (Dan Stoutamire/Stars and Stripes)

Daniel Williams, a senior defensive lineman for Wiesbaden, celebrates a big play in the second half of his team's game against Stuttgart on Friday, Oct. 23, 2015 in Wiesbaden, Germany. Wiesbaden came from behind with a dramatic 14-10 victory, ensuring a place in the DODD-Europe Division I high school football playoffs. (Dan Stoutamire/Stars and Stripes) 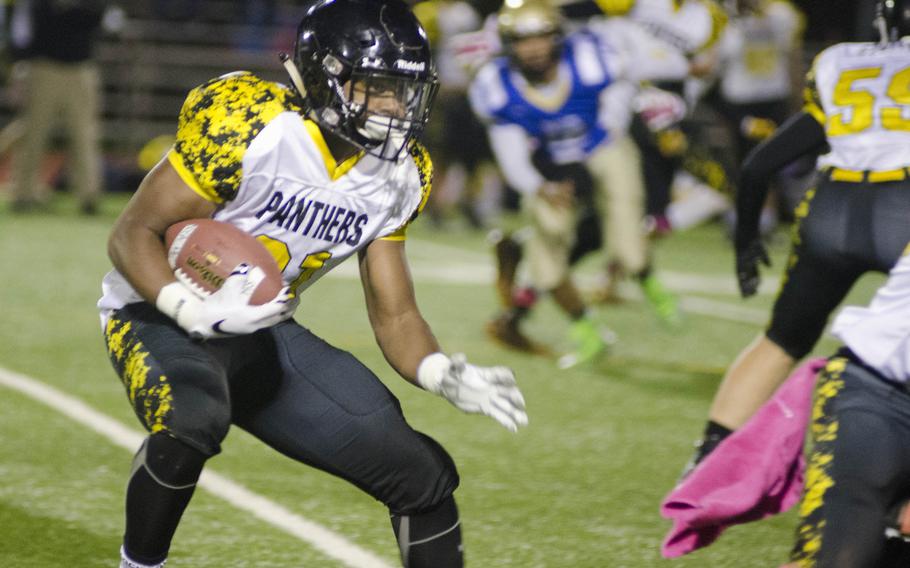 Myles Bryant, a running back with the Stuttgart Panthers, makes a cut in the first half of a football game between Stuttgart and Wiesbaden, Friday, Oct. 23, 2015 in Wiesbaden, Germany. Wiesbaden won the game 14-10, meaning it will advance to the playoffs, which start next week. (Dan Stoutamire/Stars and Stripes) 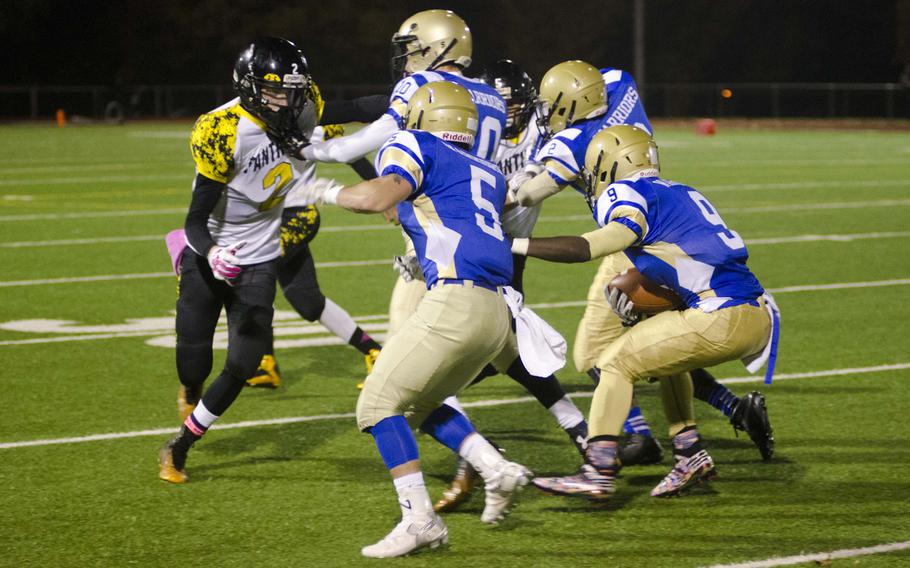 Deshon Barrow, a senior running back for Wiesbaden, looks for room on a sweep during the second quarter of his team's game against Stuttgart on Friday, Oct. 23, 2015 in Wiesbaden, Germany. Both teams came in with 2-2 records, but Wiesbaden's 14-10 victory at home ensured it would advance to the DODDS-Europe Division I playoffs next week. (Dan Stoutamire/Stars and Stripes) 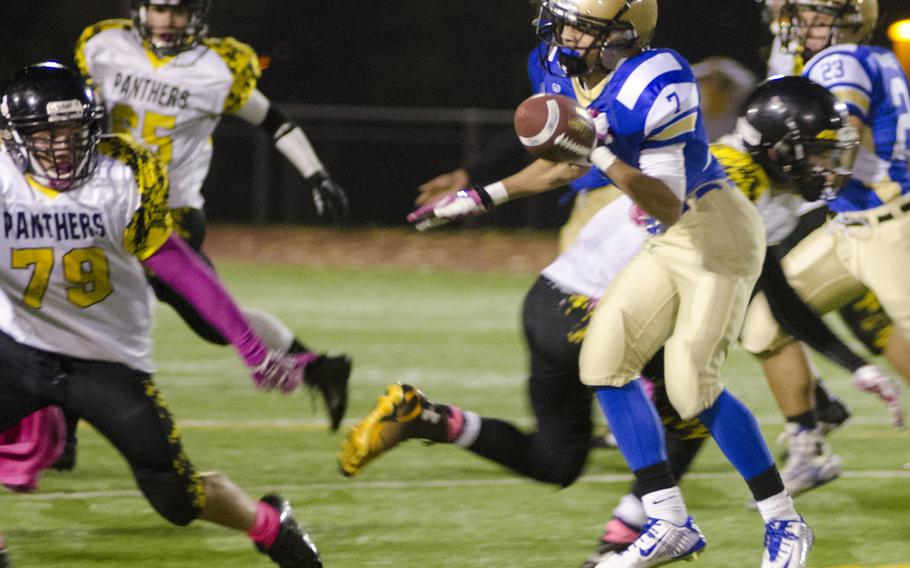 Joel Waan, a junior defensive back for Wiesbaden, loses the ball after an interception late in the game against Stuttgart on Friday, Oct. 23, 2015 in Wiesbaden, Germany. Wiesbaden eventually recovered the fumble, a key play in a tight 14-10 Wiesbaden victory that ensured playoff qualification. (Dan Stoutamire/Stars and Stripes) 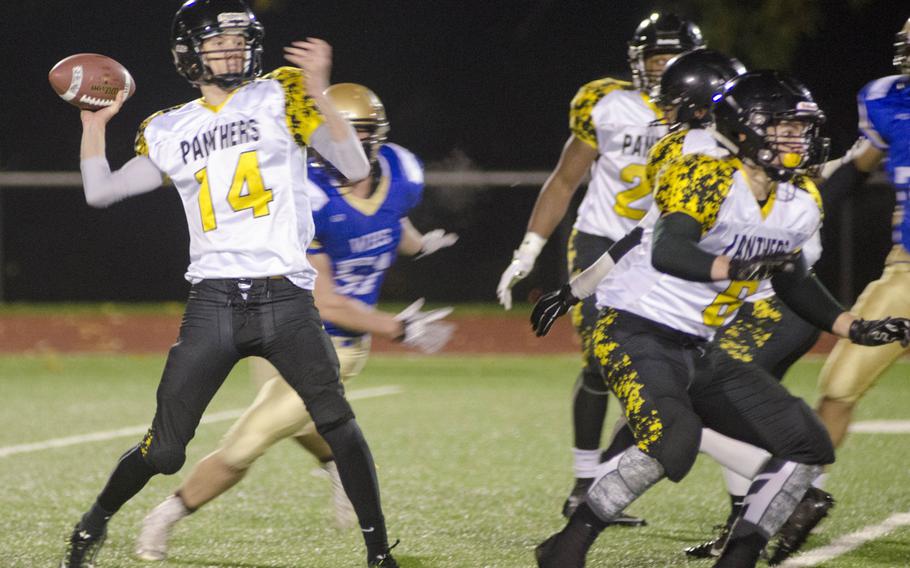 Harrison Lane, quarterback of the Stuttgar football team, throws a pass in the fourth quarter of his team's game against Wiesbaden on Friday, Oct. 23, 2015 in Wiesbaden, Germany. Stuttgart's late comback attempt faltered and Wiesbaden emerged victorious, 14-10, after a fourth-quarter touchdown pass. (Dan Stoutamire/Stars and Stripes) 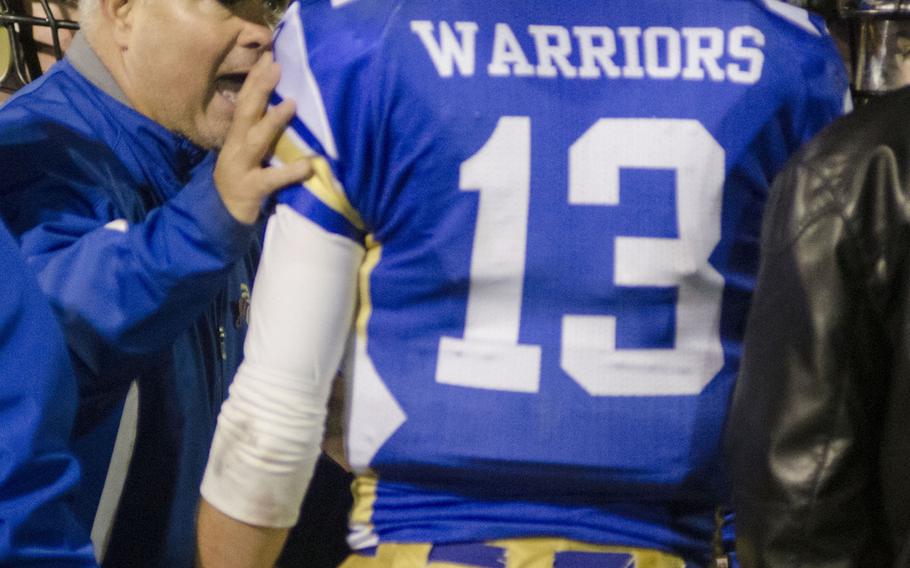 Wiesbaden head football coach Steve Jewell gives instructions to senior quarterback Eric Arnold prior to a crucial fourth-quarter drive during a game against Stuttgart on Friday, Oct. 23, 2015 in Wiesbaden, Germany. In addition to stellar defensive play, Arnold ran for one touchdown and threw another to fellow senior Carlos Ortiz in his team's 14-10 victory. (Dan Stoutamire/Stars and Stripes) 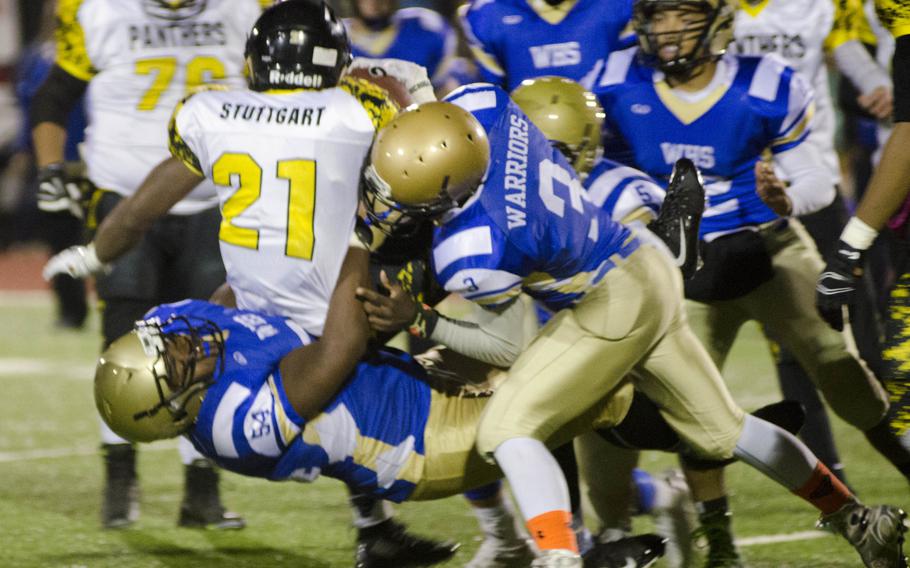 Stuttgart running back Myles Bryant is tackled by a raft of Wiesbaden defenders during a regular-season game between the two schools Friday, Oct. 23, 2015 in Wiesbaden, Germany. Wiesbaden triumphed 14-10 on the back of a fourth-quarter touchdown pass from Eric Arnold to receiver Carlos Ortiz, ensuring a playoff appearance next week. (Dan Stoutamire/Stars and Stripes)

The Wiesbaden Warriors celebrated homecoming Friday night with a 14-10 defeat of the Stuttgart Panthers that also clinched a playoff spot for the Warriors, making them the first to survive the four-team logjam playing for three open Division I playoff spots on the final weekend of the regular season.

"That's how you take care of business," Wiesbaden coach Steve Jewell shouted at his celebrating sideline as the Warriors took a knee to cap the dramatic win.

The victory guarantees that 3-2 Wiesbaden will be one of the four teams to participate in next weekend's Division I semifinals. Further details - if they'll host or travel and the identity of their opponent - depend on how 2-2 contenders Lakenheath and Vilseck fare in their Saturday games at Kaiserslautern and Ramstein, respectively.

Stuttgart too will be following those games with interest, as the Panthers remain mathematically alive for a playoff berth with the right set of circumstances Saturday.

But job one for both teams was to win Friday, and it was the host Warriors that completed that task after an evening of back-and-forth action befitting one of the best playoff chases in recent DODDS-Europe football history.

The Warriors faltered on a promising first quarter possession, negating their long march upfield with an errant pass that Stuttgart's Anthony Jordan deflected and intercepted in the end zone.

A similar drive in the second quarter yielded the desired result as breakaway runs by quarterback Eric Arnold and running back Keyshaun Green set up an Arnold touchdown run. Arnold nailed the extra point as well to give the home team a 7-0 lead at halftime.

That's when things got really interesting.

The Panthers clawed their way to 10 straight points in the third quarter, an inelegant rally that could have just as easily gone for naught for the visitors.

The Panthers' first trip into the red zone in the third quarter ended with a turnover on downs as the Wiesbaden defense denied four straight Stuttgart attempts. But the Warriors couldn't escape their precarious field position and bobbled a snap through the back of the end zone for a safety and Stuttgart's first two points.

The Panthers advanced right back inside the 10 on their resulting possession, and at first were turned back again after mishandling a field goal attempt. But a costly and controversial Wiesbaden penalty on the kick gave the Panthers one more look, and the visitors made good as Harrison Lane found Jordan Thigpen for a short-range touchdown pass. Lane tossed a two-point conversion to Jamie Ensley for a 10-7 Stuttgart lead entering the fourth.

Inspired by this turn of events, the Warriors were ready with a forceful response. Arnold found Carlos Ortiz on a deep post pattern that sliced through the center of the Stuttgart defense and sent the anxious home crowd into hysterics. Arnold's extra point put the Warriors up by what proved to be the final margin with under seven minutes to play.

Jewell said his players came up with the structure of the decisive play, convinced that it would trip up the Stuttgart secondary. With that in mind, Ortiz wasn't surprised when it played out to perfection.

"I saw it from the beginning," Ortiz said. "It was wide open."

Stuttgart had two possessions in the game's final minutes, but each ended harmlessly with a turnover on downs.

"I just don't think we executed well," Panthers coach Bill Ratcliff said. "They made a few more plays than we did."

"My team has heart," junior Dominic Eddings said. "I felt like my team could handle them. We could stop them."

As a result, Wiesbaden's season will go on.