Wiesbaden reloads for another shot at title 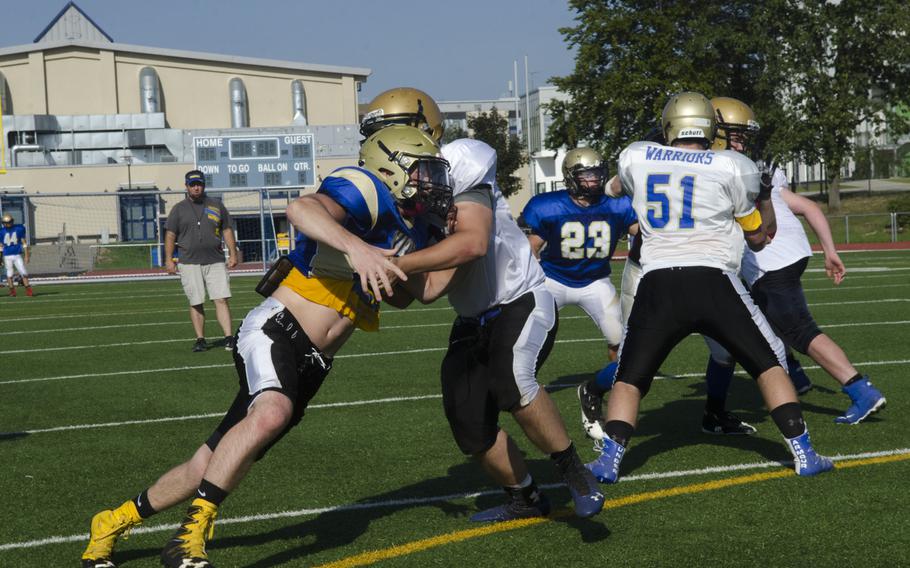 Sam Edwards, a defensive end at Wiesbaden, looks to get around his blocker during a preseason practice session in Wiesbaden, Germany, Tuesday, Aug. 29, 2017. (Dan Stoutamire/Stars and Stripes)

Sam Edwards, a defensive end at Wiesbaden, looks to get around his blocker during a preseason practice session in Wiesbaden, Germany, Tuesday, Aug. 29, 2017. (Dan Stoutamire/Stars and Stripes) 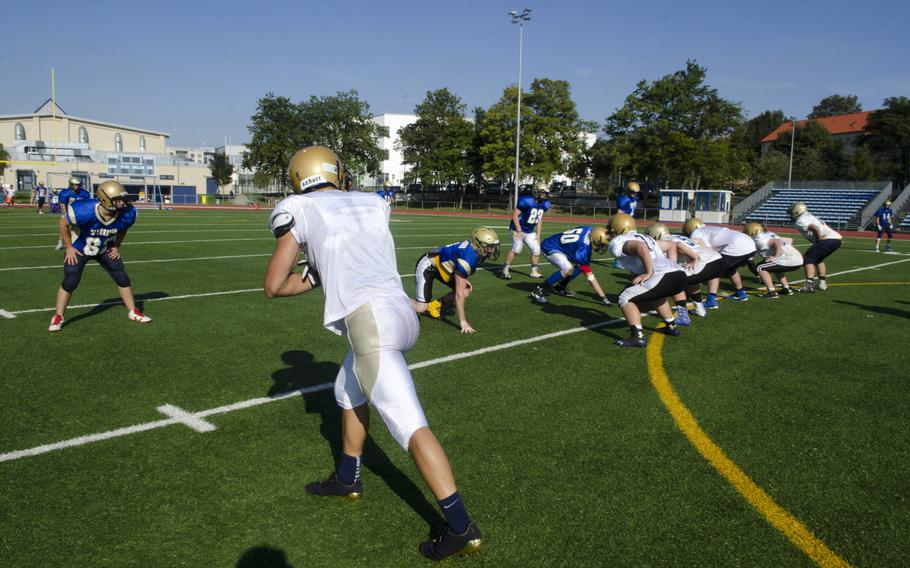 Members of the Wiesbaden football team take part in a full-team session at a preseason practice in Wiesbaden, Germany, Tuesday, Aug. 29, 2017. (Dan Stoutamire/Stars and Stripes) 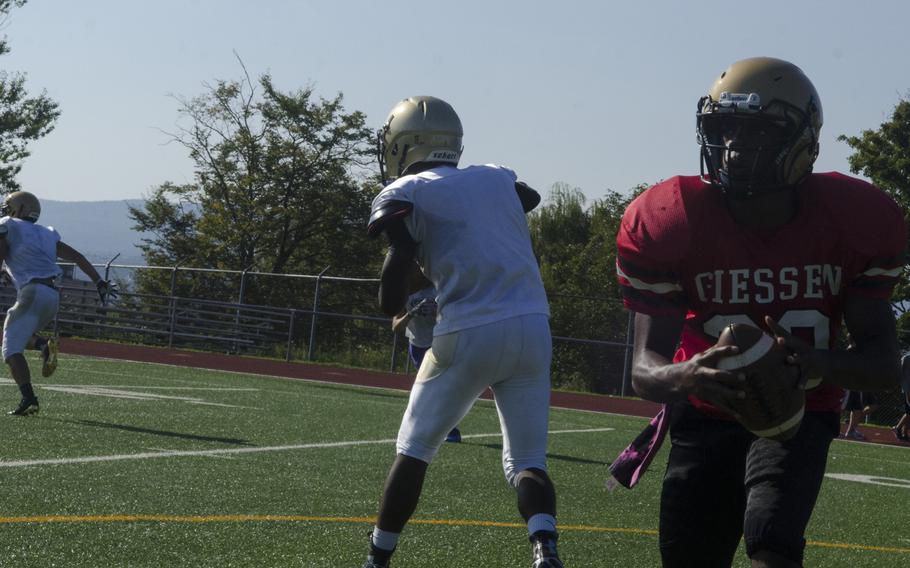 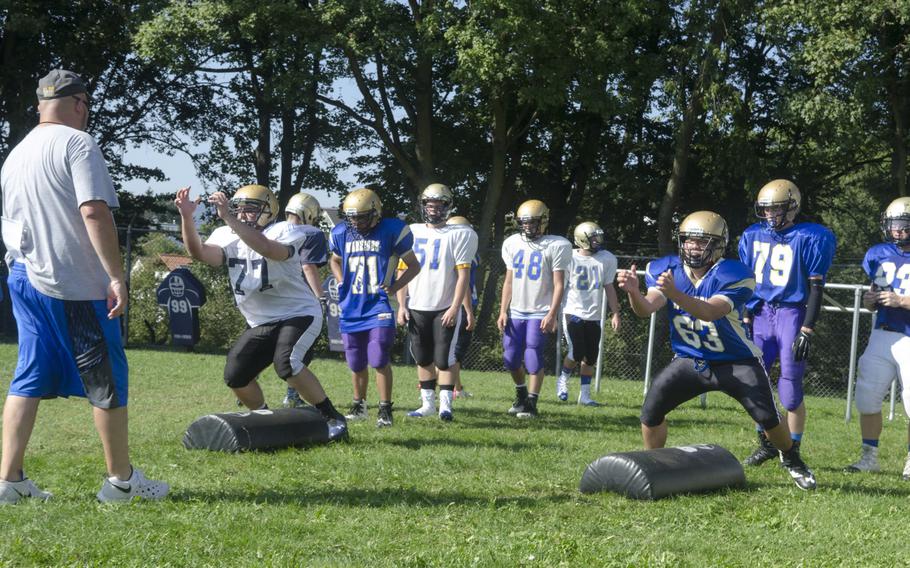 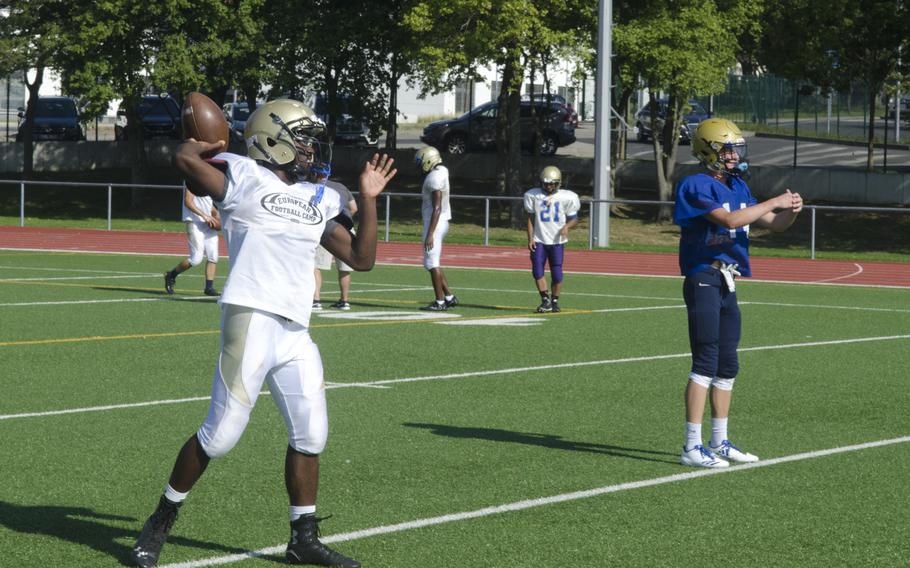 Caleb Brown, left, a senior running back and defensive back for Wiesbaden, practices throwing with teammates in a preseason practice in Wiesbaden, Germany, Tuesday, Aug. 28, 2017. (Dan Stoutamire/Stars and Stripes)

Ninth in a series of DODEA-Europe high school football previews.

WIESBADEN, Germany — Despite a strong playoff run that ended an agonizing 10 yards short of success, Wiesbaden coach Steve Jewell admits that his 2016 squad, 4-5 during the regular season, overachieved to make it to the championship game in the first place.

“We had kids with a ton of heart last year,” Jewell said. “They got the most out of themselves, and although in the end it was disappointing, we still overachieved to get to the final game. It’s hard to swallow because we were so close, but talent-wise that team and a couple others had more talent than us.”

That doesn’t seem to be the case this year. In addition to several key players from last year’s squad getting a year older – and bigger and stronger – a few new faces look set to make a major impact for the Warriors. Jewell, who used a Wing-T offense last year, says that gives him the ability to be more creative in his play-calling.

“We stayed within our limited scheme last year,” he said. “That won’t be the case this year … we’ll run more spread.”

New quarterback Josh Jackson, a junior, has a strong arm and is shifty in the pocket and presents a running threat as well. He’ll be handing off to senior Caleb Brown, who has been a consistent leader and strong performer for the Warriors for years.

“He’s indestructible. I call him ‘Superman,’” Jewell said of Brown. “You think he’s hurt, he’s out, and the next thing you know he’s back. He’s an all-around athlete, the epitome of a student athlete. Is he the best football player in the division? I don’t know, but he’d be my first pick every time.”

Brown will also play a bit of quarterback, Jewell said, and will lead the defense from the defensive backfield. He’ll be joined on that side of the ball by another new arrival, Sam Edwards, who looks set to menace opposing quarterbacks from his defensive end position.

With the passing game taking on a new element of importance, the Warriors will lean on their top two returning receivers, junior Donte Hurt and senior Chance Arnoldussen. Arnoldussen put his team into last year’s finals with a timely, powerful run in double-overtime against Vilseck in the semifinals.

Just how close the Warriors came to that unlikely championship is something that will fuel this year’s team, Brown said.

“Most definitely, it adds motivation. What is it, three years in a row, getting there and not winning? We don’t want to be the Buffalo Bills of (DODEA),” he said, referring to the 1990-1993 NFL team who went to, and lost, four consecutive Super Bowls.