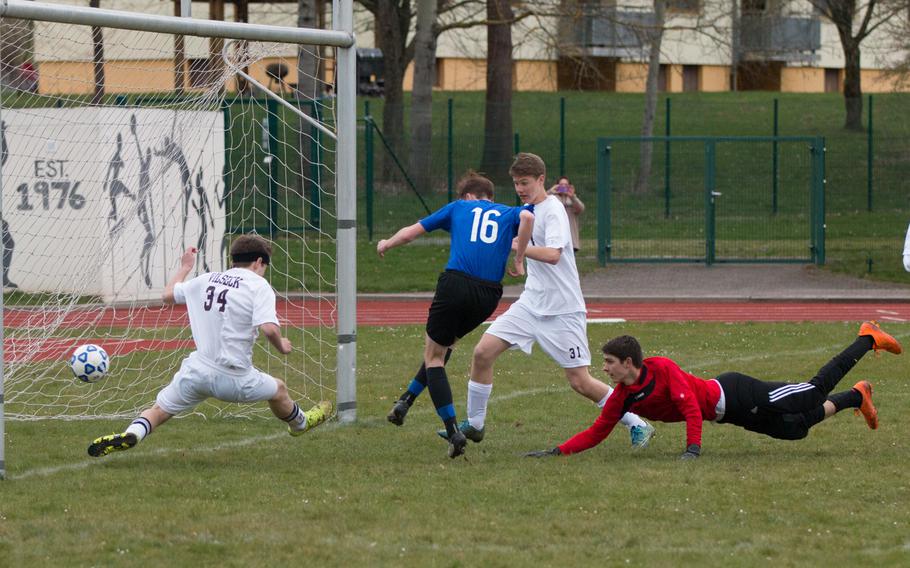 Hohenfels' Jacob Nantz threads a goal past three Vilseck defenders during the Tigers' 3-2 loss to the Falcons during a game in Vilseck, Germany, Thursday, April 7, 2016. (Michael S. Darnell/Stars and Stripes)

Hohenfels' Jacob Nantz threads a goal past three Vilseck defenders during the Tigers' 3-2 loss to the Falcons during a game in Vilseck, Germany, Thursday, April 7, 2016. (Michael S. Darnell/Stars and Stripes) 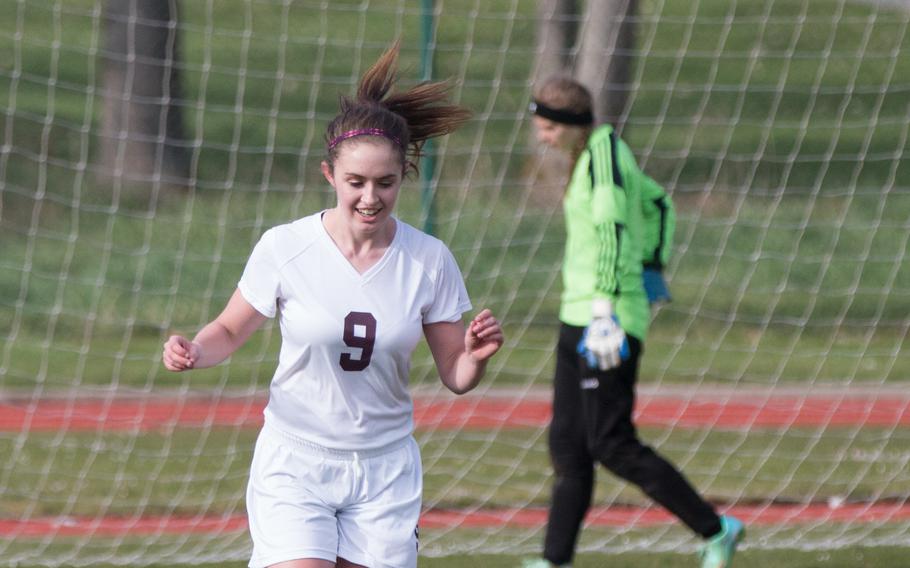 Vilseck's Bailey Rhodes celebrates a goal as her Falcons defeated the Hohenfels Tigers, 5-4 during a game in Vilseck, Germany, Thursday, April 7, 2016. (Michael S. Darnell/Stars and Stripes) 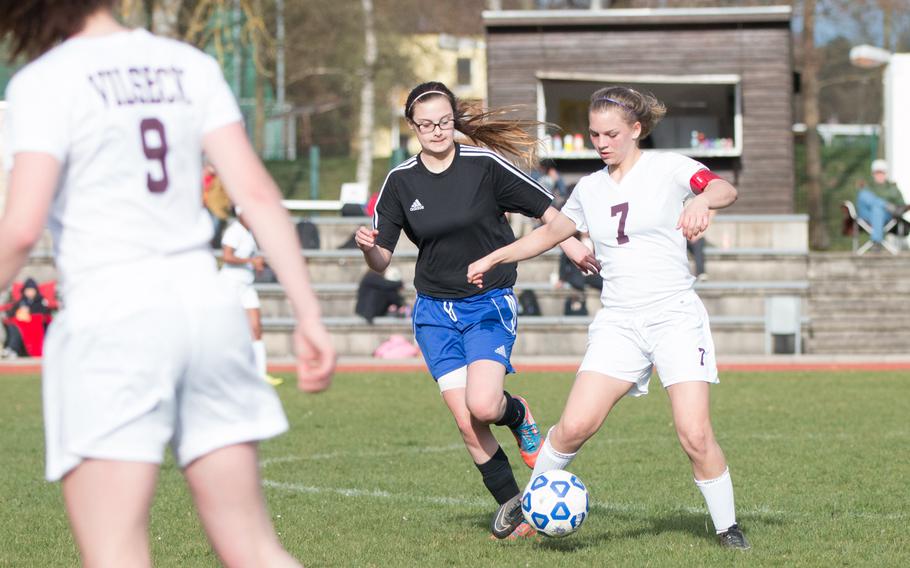 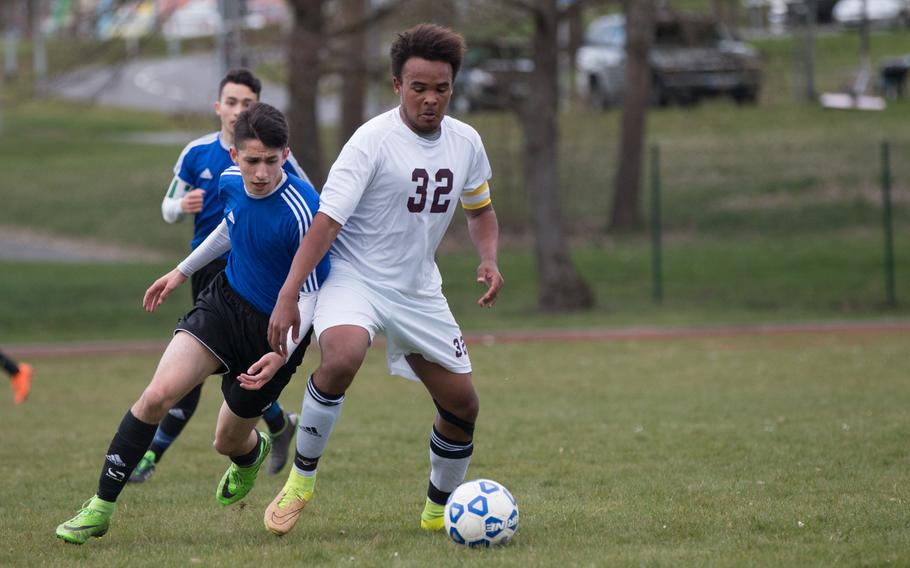 Malachi Alston scored twice as the Vilseck Falcons beat the Hohenfels Tigers, 3-2 during their first matchup of the season in Vilseck, Germany, Thursday, April 7, 2016. (Michael S. Darnell/Stars and Stripes) 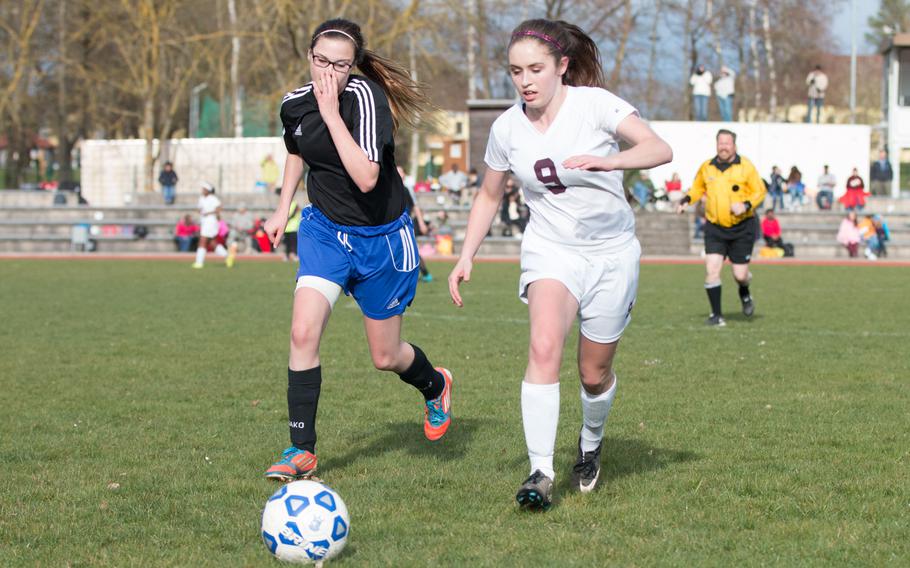 Vilseck's Bailey Rhodes scored one of the Falcons' five goals as they defeated the Hohenfels Tigers, 5-4, during a match in Vilseck, Germany, Thursday, April 7, 2016. (Michael S. Darnell/Stars and Stripes)

VILSECK, Germany – It was a rough day to be a Hohenfels Tiger, but things couldn’t have gone much better for the Vilseck Falcons.

Both the Vilseck boys’ and girls’ teams came away victorious in their Thursday evening DODEA-Europe soccer matchups against their cross-Bavarian rivals. Due to a quirk in this year’s scheduling, the games were the first of the Tigers’ season, while it was the third set of the year for the Falcons.

GirlsThe earlier game of the evening was a shootout between two high-powered offenses. Vilseck’s Monkeria Ross made what was to be the first goal of a back-and-forth match in the opening minutes of the game.

From that point on, it was a scoring free-for-all, with the Falcons eventually prevailing 5-4.

For Hohenfels, that scoring frenzy was thanks to two exceptional athletes.

Kaylee Weinzetl scored once while Amelia Heath scored three times. Heath’s second goal off a free kick was a thing of beauty – the type of goal coaches would love to have on film to show future players what a perfect goal looks like.

In fact, Tigers coach Kathleen Clemmons may just do that, considering the interest she expressed prior to the game in further developing her young talent. She could do a lot worse than having Weinzetl and Heath lend a hand on that front.

“It was our first game, I think we played very well. We have a lot of new players, I think we did a really great job,” Heath said. “I’m proud of us.”

The Falcons have just a bit more to be proud of, however. Their offense was razor sharp and - while they still could use a bit of work in their backfield play – they showcased all the tools needed to go the distance this year.

Bailey Rhodes and Taryn Sobay kept their team in the mix, solidifying their spots as players to watch as the 2016 season develops. Sobay hit back-to-back scores, the second coming at the end of an impressive tear down the field. Rhodes fired in the shot that ultimately won the Falcons the game in the waning minutes.

The victory was nice, Rhodes said, but it was anything but easily won.

“As a team we really never underestimate anyone, which I think is good,” Rhodes said. “At the end of the day, I feel like we played a really strong game and we won.”

The Falcons get to enjoy spring break before traveling to face the always dangerous Black Forest Academy. Rhodes said her team is up for the challenge.

“This year we came out a lot stronger than last year and I’m really excited to keep pushing forward,” she said.

BoysThe later game of the evening was a little less frantic. The Falcons won that game 3-2 – a normally high score for a soccer game, but compared to the shootout minutes earlier it was positively slow-paced.

Malachi Alston score two, while Jezreel McMahan put the game away with a perfect header. McMahan had a fantastic crossover assist from the workhorse of the Falcons’ squad, Jordan Olivera, who seemed to be in six different places at once all game long.

If team chemistry was a guarantee of long-term success, few squads could hope to match the Falcons on Thursday evening.

“Quality-wise we all basically have the same skill set, we’re basically where the last year’s team was at with passing and all that,” McMahan said. “We just have to keep playing the ball to the forward so he can strike. That’s the key.”

The Tigers couldn’t stop the Falcons this time around, but they had a few bright spots in an otherwise cloudy showing. Jacob Nantz scored once and Chris Lucios elevated the Tigers’ defense with several sharp, intelligent plays on the ball that otherwise could have gone very badly for his side.

Still, it was the Tigers’ first real game together as a team. The veterans say they have faith they’ll pull it back together.

“This new lineup we have, it’s a lot of players who haven’t played before,” Nantz said. “Obviously, you can only go up from a loss. The fundamentals and stuff we’re building right now can only get stronger throughout the season.”