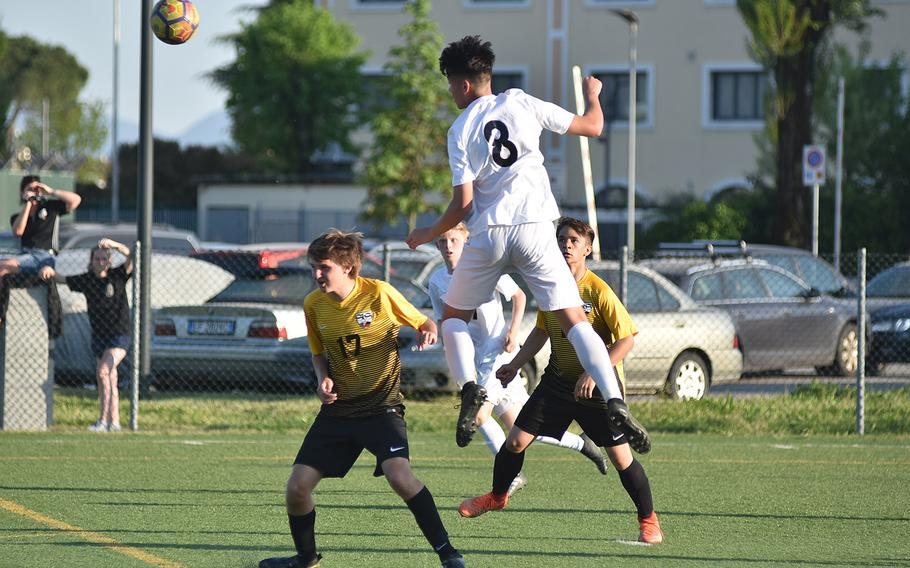 Buy Photo
Naples' Chase Traylor goes high to head the ball away from the Naples goal on Friday, April 20, 2018, in Vicenza, Italy. (Kent Harris/Stars and Stripes)

Buy Photo
Naples' Chase Traylor goes high to head the ball away from the Naples goal on Friday, April 20, 2018, in Vicenza, Italy. (Kent Harris/Stars and Stripes) Buy Photo
Stuttgart's Kevin Irby and Naples' Chase Traylor try to keep the ball from going out of bounds in the Panthers' 3-0 victory over the Wildcats on Friday, April 20, 2018, in Vicenza, Italy. (Kent Harris/Stars and Stripes) 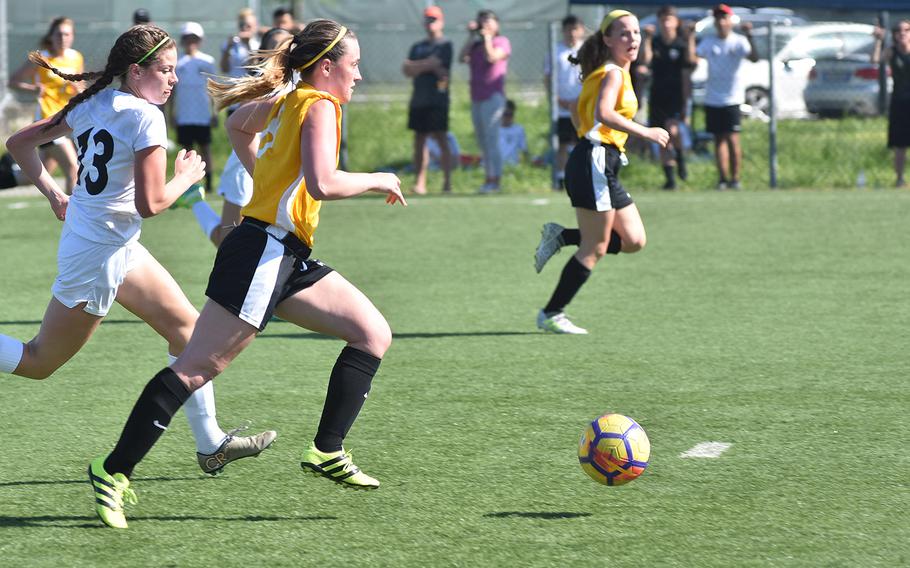 Buy Photo
It's off to the races as Stuttgart's Callie McGurk leads Naples' Kyra Barrows and a host of other players toward the Naples goal on Friday, April 20, 2018, in Vicenza, Italy. (Kent Harris/Stars and Stripes) Buy Photo
Naples defender Kyra Barrows uses her head to stop the ball in the Wildcats' 1-0 loss to Stuttgart on Friday, April 20, 2018, in Vicenza, Italy. (Kent Harris/Stars and Stripes) 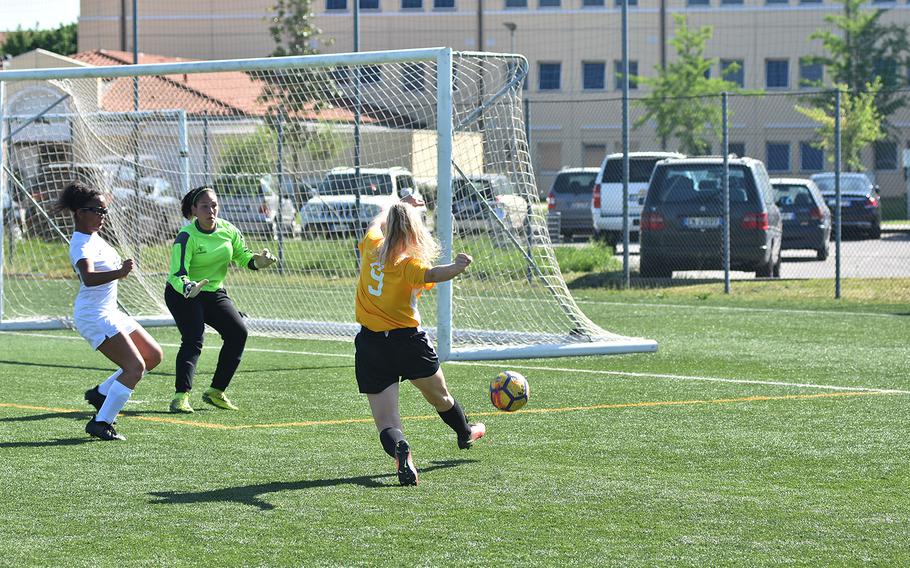 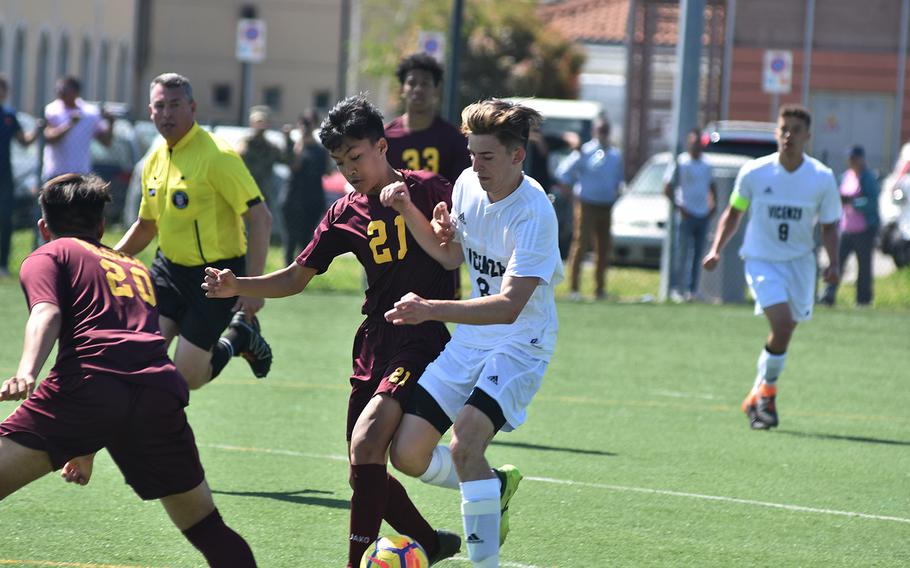 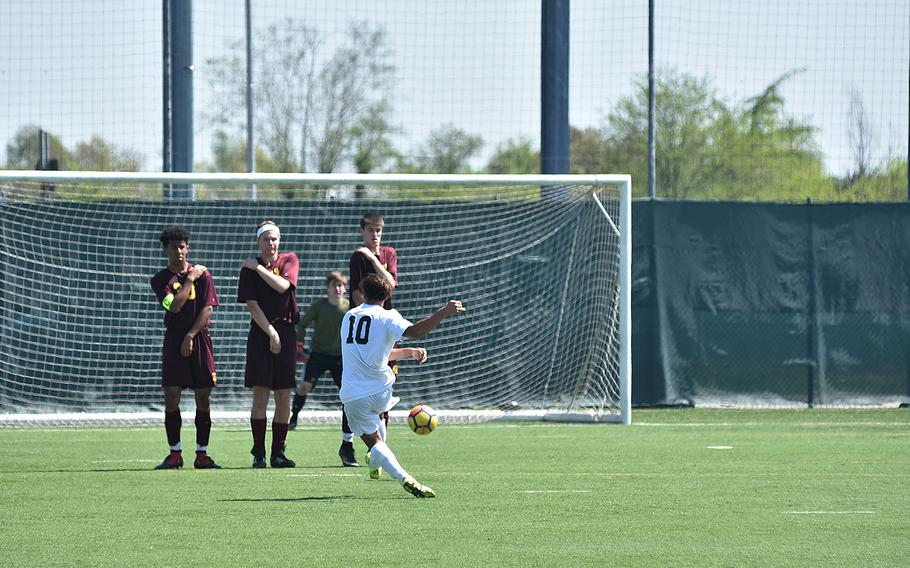 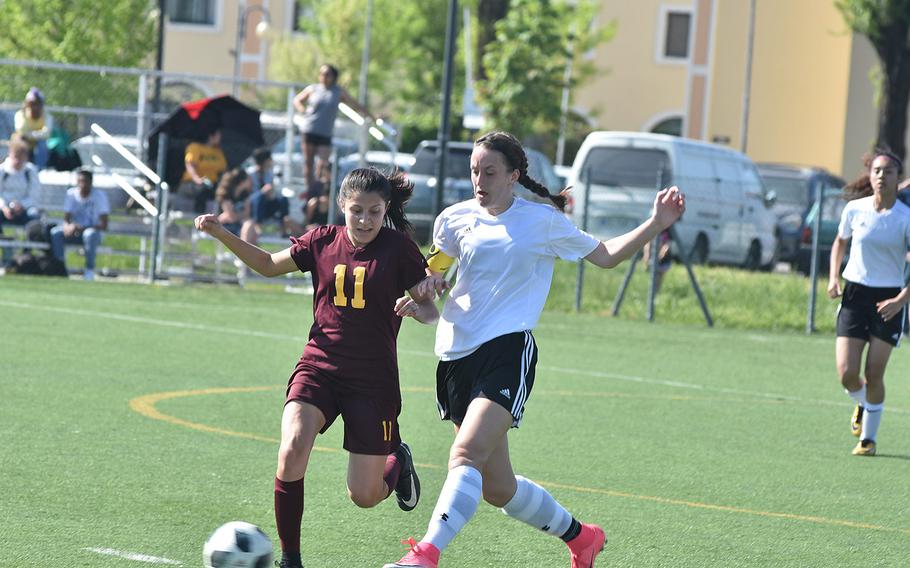 Buy Photo
Vilseck's Adlynn Huezo and Vicenza's Grace Bello battle for the ball Friday, April 20, 2018, in the Cougars' 8-1 victory over the Falcons. (Kent Harris/Stars and Stripes) Buy Photo
The ball leaves the foot of Vicenza's Grace Bello and heads toward the goal Vilseck keeper Mia Chon during a successful penalty kick on Friday, Apriil 20, 2018, in Vicenza, Italy. (Kent Harris/Stars and Stripes)

VICENZA, Italy – Three of the four soccer matches Friday at Caserma Ederle could have gone either way if a particular play or two went differently.

The other one … not so much.

The Vicenza girls team might be off to the most surprising start of the DODEA-Europe season. The Cougars, often an afterthought when it comes to soccer not only in Europe, but Italy, thumped the Vilseck Falcons 8-1 in a game that wasn’t that close.

Vicenza outshot Vilseck 24-1 in the first half and 38-2 overall.

“I’ve coached a lot of years and have never been in a blowout that we have won,” Vicenza coach Adam Ridgely said. “I’ve been on the other side, so this is new to me.”

Grace Bello, Hope Bello, Amy Silbaugh and Madeline Mollner dominated the ball for the Cougars, giving Vilseck very few opportunities to get even close to the net. Two of those players are freshmen, and another is a sophomore.

That – and the start of the season – have the Cougars hoping they’re starting something.

“We hope so,” said Grace Bello, a senior. “We’re excited. We’ve put in a lot of hard work in practice. And we’ve come such a long way since tryouts.”

The Bello sisters each had three goals, Silbaugh added another one and Kelly Shinners headed in yet another. Vilseck’s lone score came thanks to a Vicenza defensive blunder, when an errant Cougars kick found its way past the goal line – despite the fact that no Falcons were within 10 yards of the goal.

Stuttgart 1, Naples 0: The Panthers overcame the Wildcats’ unorthodox defense with a second-half goal from Camille Pereira, and made it stand up despite a flurry of Naples attempts in the final minutes.

Naples brought its defenders past the center line, causing about half of Stuttgart’s runs on the goal to be called off by off-sides penalties in the scoreless opening half.

Not quite as strong as Stuttgart’s, though. Naples assistant coach Chad Lucy pointed out that the 1-0 defeat was the closest the two teams have played in recent years.

“This was a win for us as far as I’m concerned,” head coach Rebecca Lucy said.

The Wildcats, despite being more accustomed to the summer-like conditions on the field, wore down in the second half, and Stuttgart attackers started getting more and more shots on the goal.

Naples was outshot 27-9 for the game, and never seriously threatened to score until the final minutes.

Genesis Torrent, making only her second start in goal, turned away 12 Stuttgart shots. Pereira got one past her after the Panthers rushed a throw-in before the Wildcats could fully set up.

BoysVilseck 2, Vicenza 1: Cougar coaches said before the game they were hoping to see more ball control from their team. That didn’t happen, especially in the first half, as the Falcons took a 2-0 lead. Timmothy Simmons scored on a header after a corner kick from Hernan Rosales. Rosales hit the cross bar a few minutes later, but was back again by converting a free kick from 30 yards out.

Vilseck outshot Vicenza 15-2 in the first half, but the game turned a bit in the second half. Vicenza eventually found the net on Richard Porpoat’s free kick.

“We lost a little bit of focus in the second half,” Vilseck coach John Sabala said.

Vicenza assistant Luis Lebron said the Cougars have played only two games and have a lot of work to do. But he has hopes that once it clicks, “the progress will be exponential.”

Stuttgart 3, Naples 0: A defensive lapse in the first half and an even worse one in the second half that resulted in an own goal were too much for the young Wildcats to overcome.

Ryan Breithaupt knocked in a rebound shot in the first half for Stuttgart. The Panthers added insurance in the closing minutes after Sean Rhodehamel made a strong attack on goal and Chase Traylor picked up the rebound and netted it.

Stuttgart coach Chris Kelly said he wasn’t sure that Vicenza’s smaller turfed field would help his team get ready for conditions at May’s European championships. But he said seeing some of the teams they’ll face there will.

His team took advantage of the narrow field to launch a series of unusual attacks on goal with three throw-ins getting turned away from the net by the Naples keeper. The tosses wouldn’t have counted if they had gone in, but “anything to keep the pressure on the goalkeeper helps.”

Naples doesn’t have a senior on its roster.