Buy Photo
Ansbach's Christian Mattil connects with the ball for a grounder Saturday, during a game against Aviano at Aviano Air Base, Italy. Ansbach won 10-7. (Jason Duhr/Stars and Stripes) 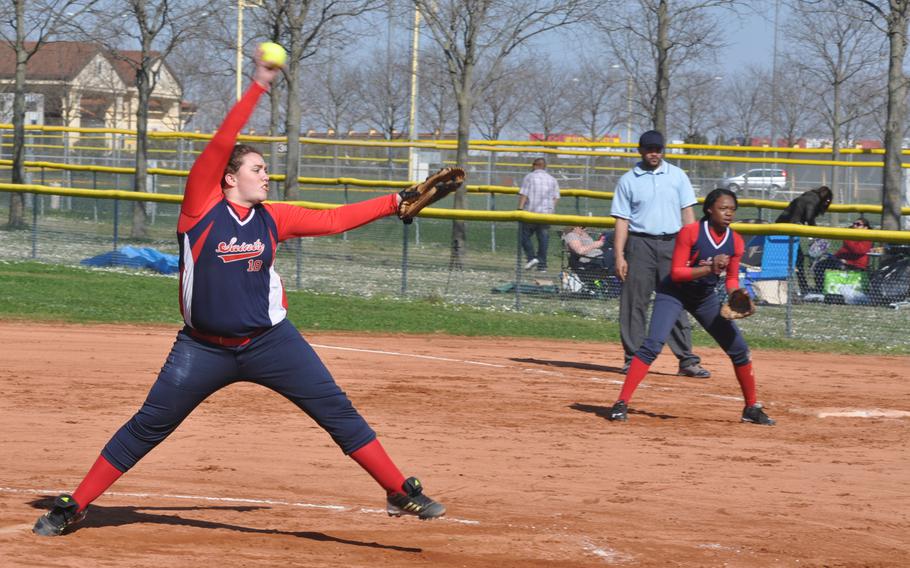 Buy Photo
Aviano pitcher McKenzie Milligan winds toward home in the Saints' 17-7 victory over Hohenfels on Saturday. Aviano went 3-0 on the weekend to open the season. (Kent Harris/Stars and Stripes) Buy Photo
Hohenfels' David Vidovic didn't catch up to this pitch against Sigonella. But the senior drove in 10 runs Saturday in his first two high school baseball games, leading the Tigers to a pair of victories. (Kent Harris/Stars and Stripes) 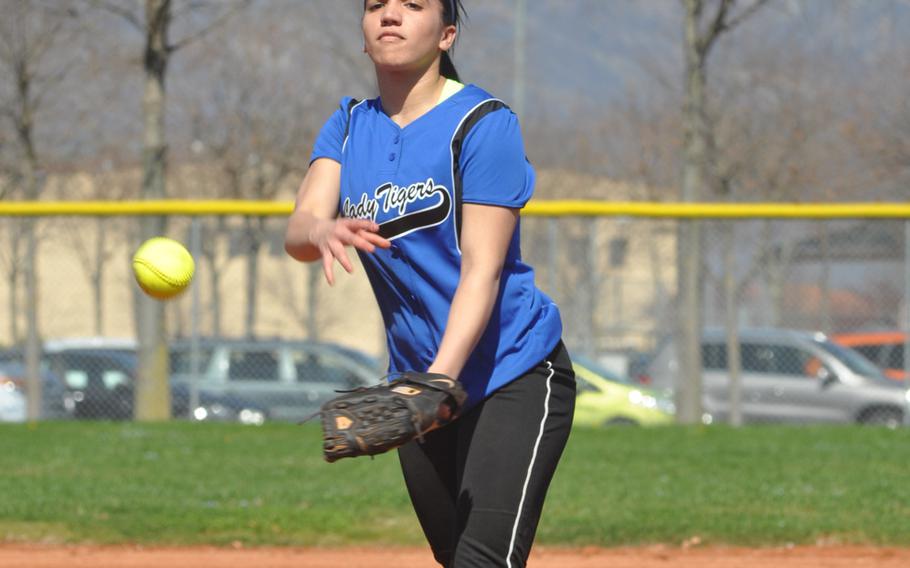 Buy Photo
Sigonella pitcher Hanna Barnes didn't get the called strike she was hoping for against Hohenfels. But the Jaguars rallied for a 24-9 victory Saturday at Aviano Air Base, Italy. (Kent Harris/Stars and Stripes) 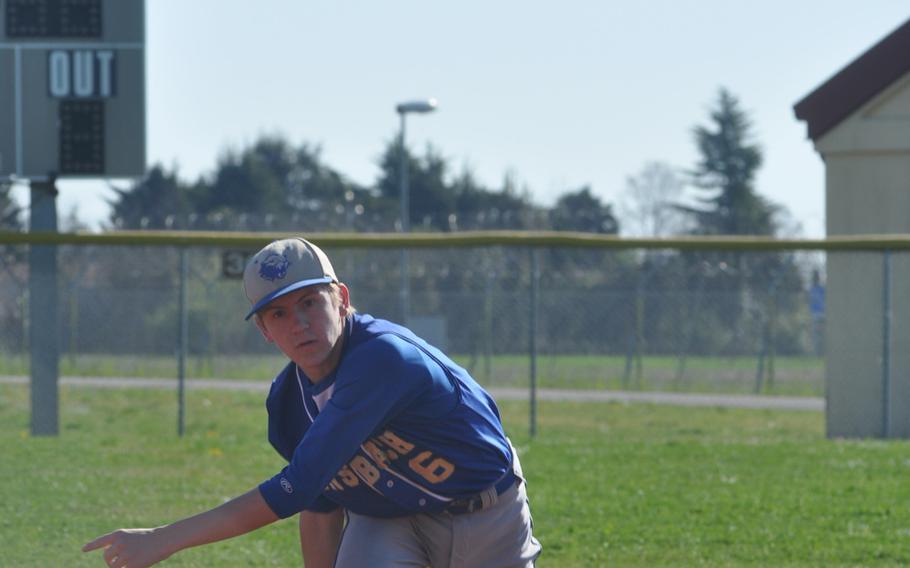 Buy Photo
Ansbach's Nick Duplessie fires the ball toward the plate against Sigonella in the Cougars' 8-2 victory on Saturday at Aviano Air Base, Italy. (Kent Harris/Stars and Stripes)

Baseball teams in Germany might be a bit stronger. Softball teams in Italy might be the teams to watch in the championships. And David Vidovic seems to be able to master any sports he plays.

Vidovic, the top football player in Europe the last two seasons and All-Europe second team in basketball this season, decided to give baseball a try his senior season.

“All my friends were playing it, so I thought I might as well,” he said after driving in 10 runs in his first high school baseball games. He’s run track previously in the spring, though he did play some baseball when he was younger.

His inside-the-park grand slam finished off Aviano via the mercy rule in the second game, 19-3.

“He’s quite an athlete,” said coach Larry Daffin, who also saw Vidovic run roughshod on the football fields as the Tigers reached the Division II finals the last two years and won one title.

Vidovic doesn’t pitch, though, and shook his head when asked about it.

“I’m fine in center field,” he said with a smile.

And that appears to be a team weakness at this point. “We could use one or two more (pitchers),” Daffin said.

Vidovic wasn’t the only Tiger who has made his name in football who produced Saturday. Tony Saintmelus drove in the winning runs in the seventh inning as Hohenfels topped Sigonella 7-6 in extra innings in the day’s second baseball contest.

Ansbach had topped the Jaguars 8-2 in the first game of the day. Nick Duplessie and Jason Erdman each drove in two runs for the Cougars. Ansbach took an 8-0 lead on Aviano in the final game of the day then held on for dear life in a 10-7 victory. The Saints had drawn to within 8-7 with the bases loaded in the bottom of the third.

The teams were supposed to play the same amount of games on Friday, but steady rain on Wednesday and Thursday in Aviano scuttled those plans. Instead, Sigonella downed Aviano 7-0 as the weather cleared up Friday afternoon.

That was the Jaguars’ only victory of the weekend, but coach Matt McKown was still all smiles.

“I can’t remember the last time Sigonella got to play a team from Germany in the regular season,” he said. “This was a perfect opportunity to show the boys what things they need to do to get themselves ready for the championships.”

Just a few feet away, the Saints could have crowned themselves champions, at least of the weekend.

After dispatching the Jaguars 7-3 on Friday, Aviano romped to victories Saturday over Hohenfels and Ansbach to finish two the two days at 3-0.

Pitching was a strong point for Santiago Cadena’s team.

“We’ve got two good ones,” he said after watching McKenzie Milligan lead the Saints to a 17-7 victory over Hohenfels and then Shamera Lane pitch even better in a 19-0 victory over Ansbach. Lane didn’t give up a hit in three innings.

Aviano led 12-0 after three against the Tigers and was still scoring in the fifth when the game ended via mercy rule. The Saints needed only two innings to score 19 runs against the Cougars in the second game.

Sigonella scored even more runs Saturday. The Jaguars tallied 18 in the first inning against the Cougars and won going away 22-5. Elizabeth Camus drove in five runs. The Jaguars routed the Tigers 24-9 in the next game, overcoming a 9-5 deficit with 17 runs in the fourth.

“We didn’t give up,” coach Steve Larson said. “We kept fighting, hitting the ball. I don’t think we made many errors in the field either.”

It took Sigonella about 18 hours to reach Aviano via bus. And Ansbach’s and Hohenfels’ trips weren’t much shorter.

But Larson seemed to echo the comments of all the coaches involved by saying he was grateful that DODDS-Europe scheduled the games.

“In our case, we get to see the Italian teams all the time,” he said. “It’s just nice to see other people.”