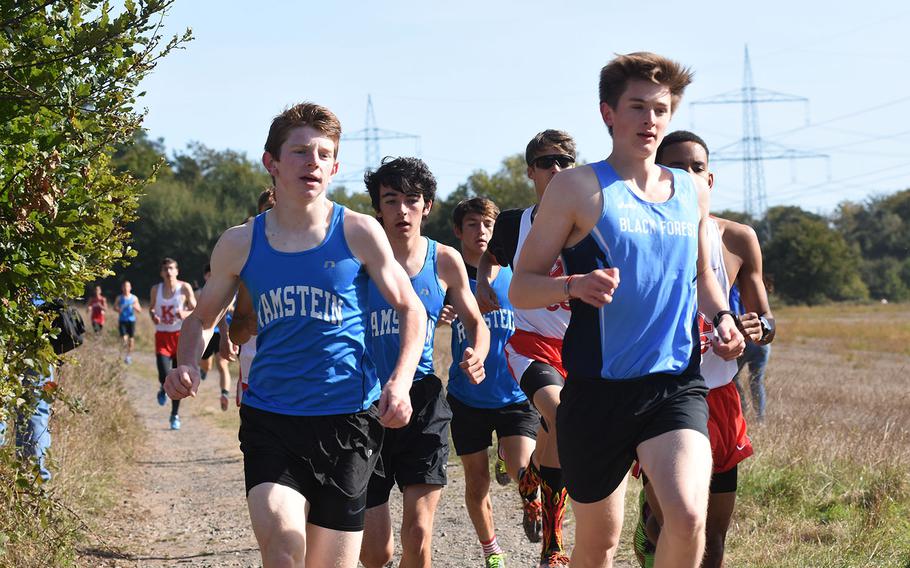 Buy Photo
Ramstein's Denver Dalpias, left, and Dashiell Rogers run at the front of the pack with Black Forest Academy's Mac Roberts in the early stages of the Ramstein cross country meet on Saturday, Sept. 29, 2018, in Miesenbach, Germany. (Jennifer H. Svan/Stars and Stripes)

The field of DODEA-Europe cross country runners can be a difficult one to handicap. But that task gets a lot simpler Saturday.

Times are of questionable reliability in the regular season. Some runners blaze through flat courses while others struggle uphill, skewing the resulting times of each group. Varying weather conditions, particularly across a swath of land as vast as Europe, and quality of each meet’s competition can profoundly affect results. Finally, coaches and runners bring different strategies and levels of urgency to each stage of the season.

All of those caveats are rendered obsolete on Saturday, when all of DODEA-Europe’s best runners converge on Rolling Hills Golf Course in Baumholder, Germany, for the 2018 European championship meet. With everyone on the same course, under the same conditions, and with the starkest of motivations, there’s nothing left but to win.

BoysA deep pool of potential champions will vie for the individual title here while three of Europe’s biggest programs battle for Division I team honors.

Defending Division I champion Ramstein and challengers Kaiserslautern and Stuttgart will stage an equally interesting competition for the large-school team crown. Each team has enjoyed victory this fall, including a narrow Kaiserslautern triumph when the three teams shared a meet Sept. 22. But the margin is so small that an uncharacteristically strong or weak performance from any member of those schools’ top fives could swing the championship.

Abby Michalec, a close runner-up to teammate Smith a year ago, produced not only the best returning finish from 2017 but the best time of the 2018 regular season at 18 minutes, 58 seconds.

Stuttgart is the heavy favorite to repeat as Division I team champion, having finished first in all of its regular-season meets this fall. St. John’s and Hohenfels will look to extend their respective Division II and III reigns.