They're aiming at a higher target 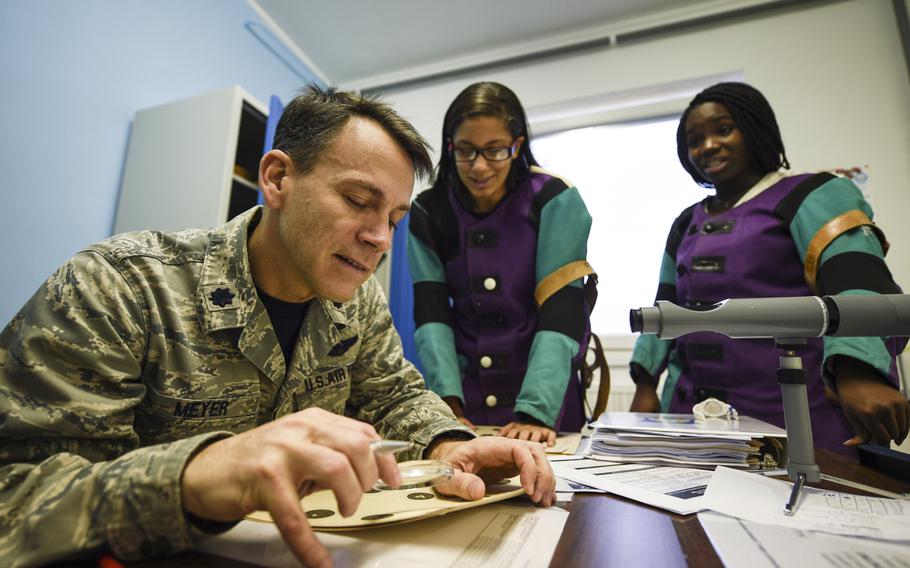 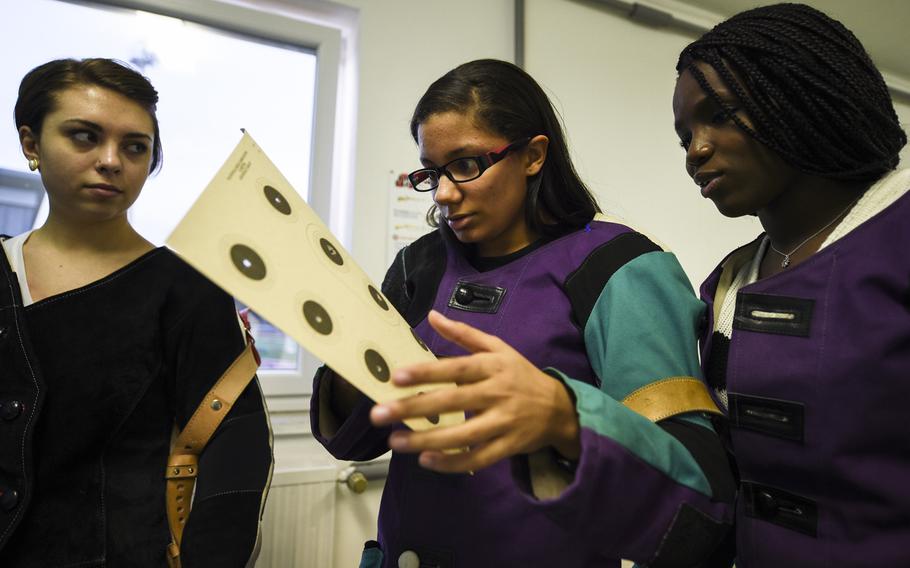 Members of the Kaiserslautern High School marksmanship team, from left to right, Emily Vose, Valeria Santos and Belle Cyriaque, bring their targets to their coach for scoring during a practice session at their school's new four-lane range Tuesday afternoon, Jan. 27, 2015. (Joshua L. DeMotts/Stars and Stripes) 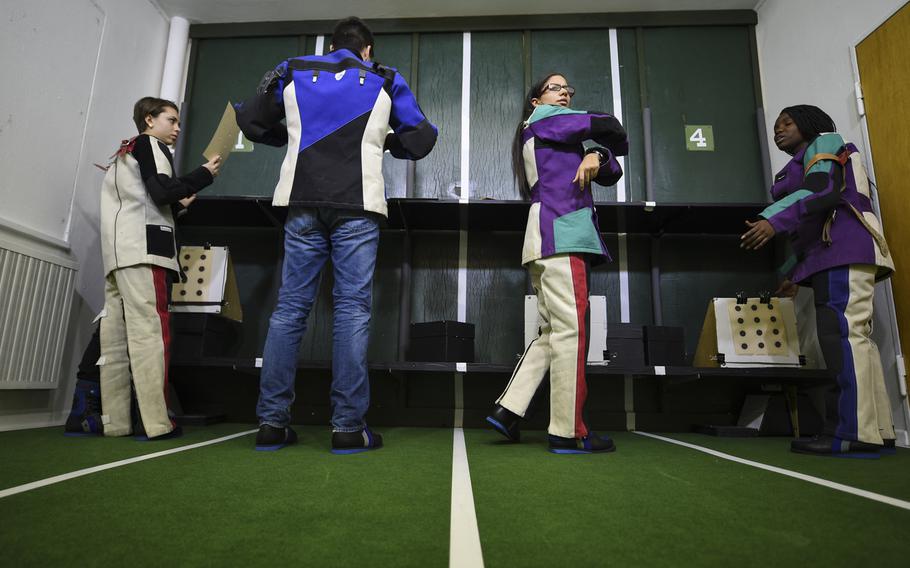 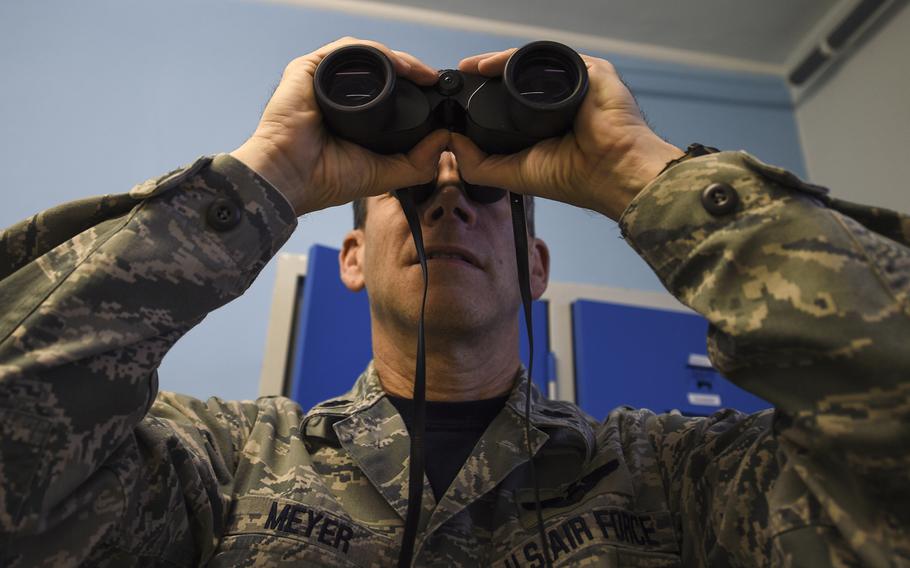 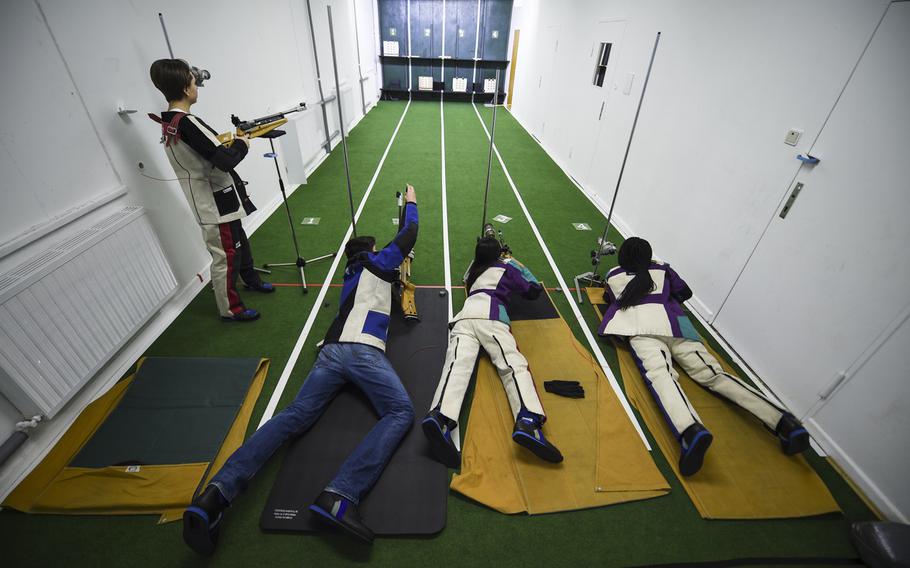 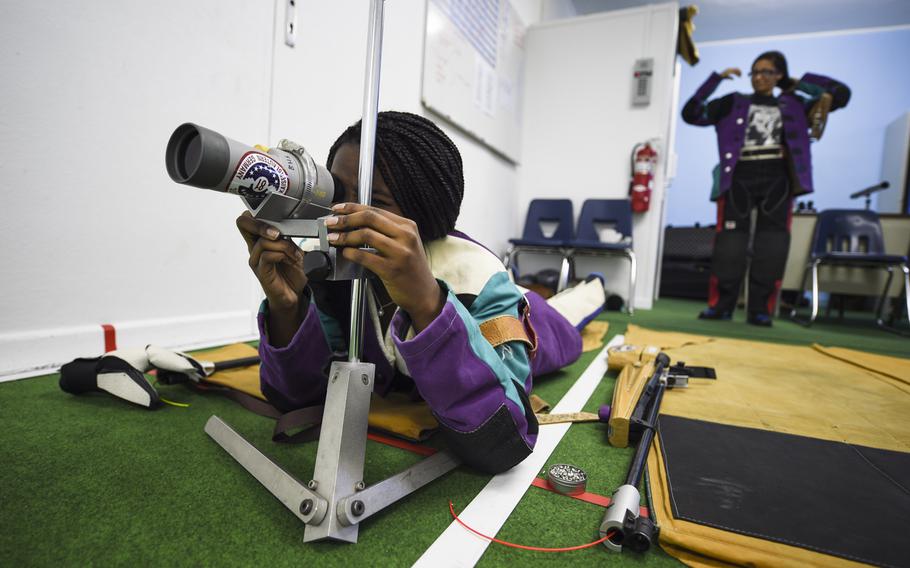 The sport of marksmanship requires competitors to don cumbersome protective clothing, wear eye protection and adhere constantly to strict safety rules. It requires specific and expensive equipment, an expansive and meticulously-constructed venue for practices and meets and a substantial amount of institutional leadership and support.

All that said, the sport is remarkably accessible.

Fresh competitive teams at Wiesbaden, now in its third season of competition, and first-year program Kaiserslautern have expanded the sport’s DODDS-Europe reach. Both schools will be among the six teams competing in Saturday’s European championship meet at Vilseck, joining reigning juggernaut Patch and stalwart contenders Ansbach, Hohenfels and Vilseck.

“We feel like we’re a success just being there,” Kaiserslautern coach, retired Lt. Col. Robert Meyer, said at a recent practice in the school’s new four-lane range.

There are a variety of factors to explain the immediate viability of the fledgling programs at Wiesbaden and Kaiserslautern, including each school’s sizeable student population, a strong JROTC program from which to draw competitors, available sources for infrastructure and equipment and a general sense of support and acceptance from DODDS-Europe’s more established squads.

But the teams still needed to succeed at the most basic level – talented shooters posting worthy scores. That too fell into place, thanks in part to the aptitude displayed by a gifted but inexperienced shooter at each school.

At Wiesbaden, junior Olivia Stecker has given the Warriors a boost in both leadership and points.

While deeply involved in JROTC, Stecker said she was “pretty much completely new” to marksmanship prior to this season. But she had friends competing, including Wiesbaden teammate Max Petrunyak and DODDS-Europe frontrunner Maggie Ehmann of Patch, and she took their suggestion to take up the sport.

“It’s a great sport. I’ve really come to love it,” Stecker said. “I’m really happy I decided to try out.”

Her quick proficiency with an air rifle made the new venture all the more fun. Stecker has cracked the top 10 at a handful of meets this year, including with a 273-point showing in last weekend’s regular-season finale, and has set a goal of a top-10 finish Saturday at Vilseck. She said the continued support, advice and good-natured challenge offered by friends like Petrunyak and Ehmann has been “a really big factor” in her fast start.

“Every week I want to get better and better,” Stecker said. “I’m really amazed at how fast I’ve been able to pick it up.”

Wiesbaden’s coach, retired Col. Darryl Hensley, had high praise for Stecker and her impact on the program. He added that her role will expand even further next year when Stecker takes over as commander of the Wiesbaden Warrior Battalion, a position from which she can steer more interested cadets towards marksmanship.

Stecker’s looking forward to it.

“I plan on coming back,” Stecker said. “I plan on leading my team next year.”

The launch of the Kaiserslautern program, meanwhile, has benefitted from its own dynamic new talent.

Valeria Santos spent much of the last year waiting anxiously as Meyer guided the program down its path to mainstream DODDS-Europe competition. When the team was officially launched, Santos immediately signed up for her first competitive shooting experience.

“I was totally stoked,” Santos said.

Meyer is equally happy to have her on the team, particularly given her outstanding early performance. Santos shot a 275 on Saturday, including a prodigious 96 points from standing position, considered the most difficult of the sport’s three shooting positions ahead of prone and kneeling.

Like Stecker, Santos’ initial exuberance only grew when she saw her efforts immediately rewarded with high scores. The Kaiserslautern junior never thought she was destined for sports stardom.

“I didn’t expect it. I’m not the athletic kind,” Santos said, admitting a tendency to “slack around” in her free time. “But I was like, wow, I can really shoot.”

Santos can credit some of her early success to teammate Rolando Ferreras, who along with fellow senior Marco Walther bring some much-needed experience to the neophyte program.

Just a few years ago, Ferreras was a rising underclassman prospect at Heidelberg. But after that school closed and with his new school a year away from launching its program, Ferreras last year was a shooter without a team.

That disappointment gave way to this year’s opportunity, and Ferreras has embraced it. The senior is not only consistently Kaiserslautern’s top scorer – Santos is fervently chasing his standing school record of 280 – but a mentor to the program’s many novice shooters.

“Everyone was very responsive, very eager to learn,” Ferreras said. “I enjoyed sharing my knowledge.”

As promising as its been, the concurrent rise of Kaiserslautern and Wiesbaden marksmanship is currently limited by a nearly-impenetrable glass ceiling. The Patch Panthers are all but shoo-ins to repeat as DODDS-Europe team champions on Saturday, and either Ehmann or defending solo champion Caelyn Miller is likely to keep the individual title in Stuttgart. In short, the program is presently occupying its own tier of DODDS-Europe marksmanship, and raised the bar even further this season with a stunning 1,443-point effort on Jan. 17.

But Ehmann, Miller and several other key contributors are due to depart after this season. That will leave Patch coach Raul Pinon leaning on his own younger phenoms, including current top contender Meaghan Ambelang, junior Avery Kostic and a bevy of promising freshmen. Not that that’s necessarily a problem; based on its scores this season, this year’s Patch junior varsity squad would likely place second to the Panther varsity at Saturday’s European championship meet were it competing.

“I believe the team will be in a good position to continue to contend for championships,” Pinon said. “Next year, and the years to come.”

Hensley and Meyer concede that point, and have accepted the challenge of incrementally pushing their teams to the point that they’re ready to compete with Patch, not to mention the resilient programs at Ansbach, Hohenfels and Vilseck.

Hensley set ambitious goals for his team entering the season, most notably to break the 1,300-point barrier in a meet and qualify for the European tournament. The team reached the first goal on Jan. 10 with a score of exactly 1,300 points. The Warriors have bumped up that point total in each meet since, peaking at 1,328 points on Jan. 24, and are hoping to do even better on Saturday, when they’ll also achieve that second goal of competing in the European finals.

“This sport is all about growth and consistency,” Hensley said. “We are on the right track.”