Surprise! It's Ramstein vs. Patch again 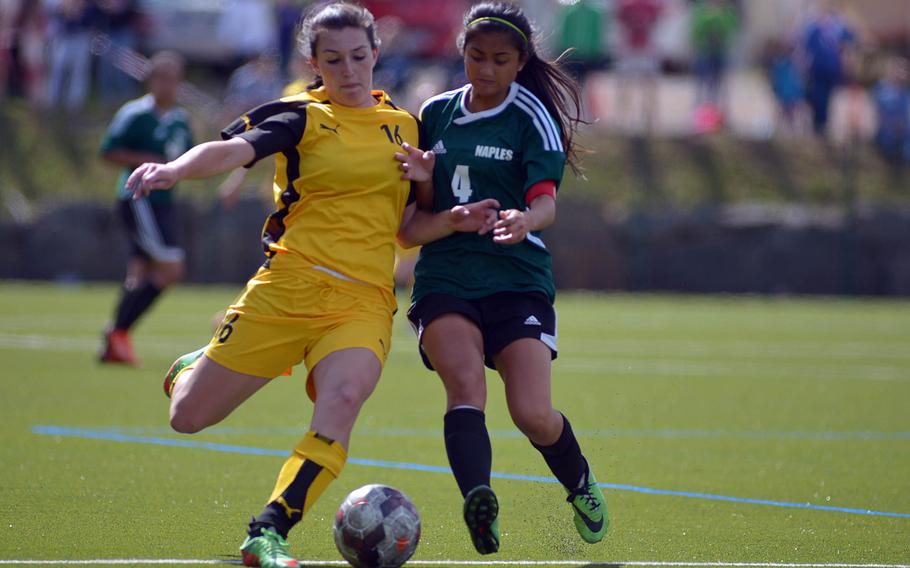 Patch's Julia Smith tries to get a shot off against Naples defender Amanda Ortega in a Division I semifinal at the DODDS-Europe soccer championships at Reichenbach, Germany. Patch won 4-0 to advance to Thursday's final against Ramstein. (Michael Abrams/Stars and Stripes)

Patch's Julia Smith tries to get a shot off against Naples defender Amanda Ortega in a Division I semifinal at the DODDS-Europe soccer championships at Reichenbach, Germany. Patch won 4-0 to advance to Thursday's final against Ramstein. (Michael Abrams/Stars and Stripes) 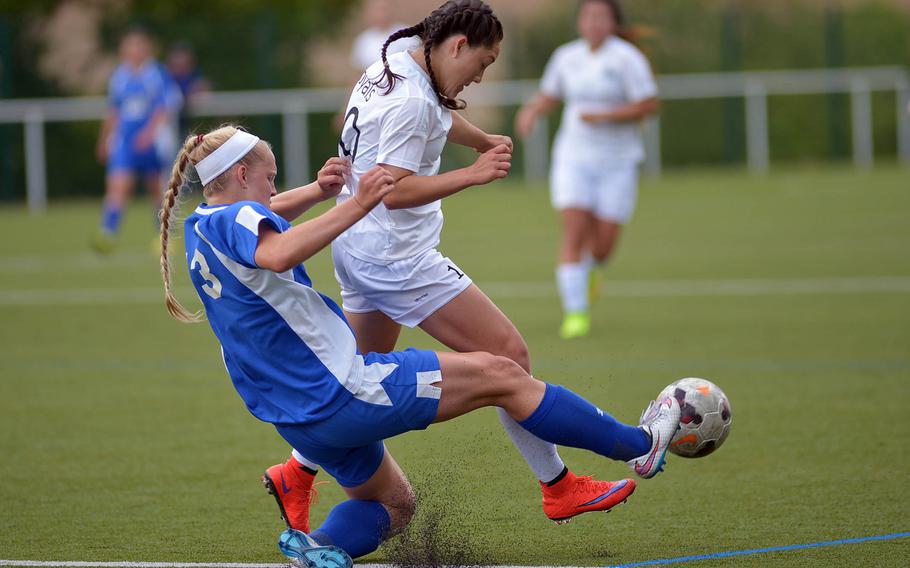 Wiesbaden's Catherine Klein, left, clears the ball from Ramstein's Ebony Madrid in a Division I semifinal at the DODDS-Europe soccer championships at Reichenbach, Germany. (Michael Abrams/Stars and Stripes) 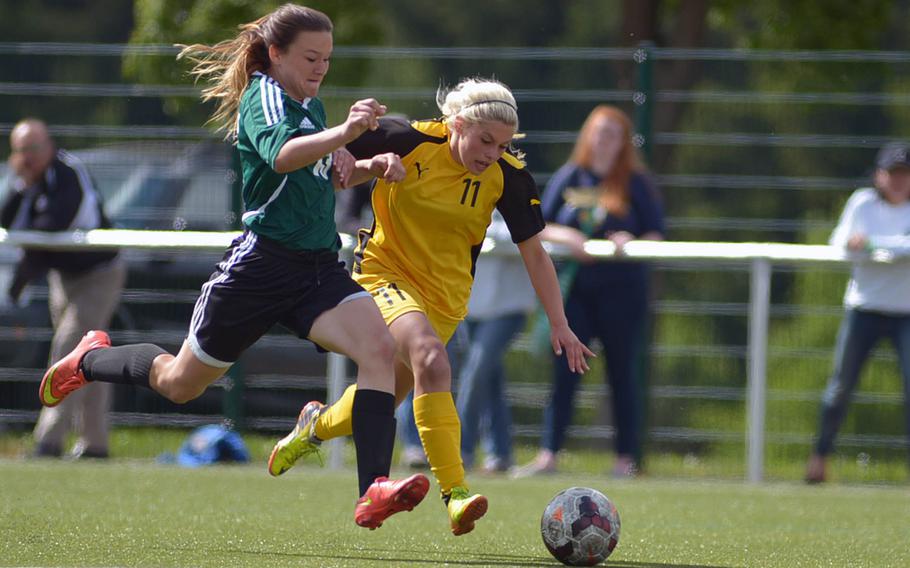 Naples' Nora Bair, left, defends against Patch's Kaitlyn Farrar in a Division I semifinal at the DODDS-Europe soccer championships at Reichenbach, Germany. Patch won the game 4-0. (Michael Abrams/Stars and Stripes) 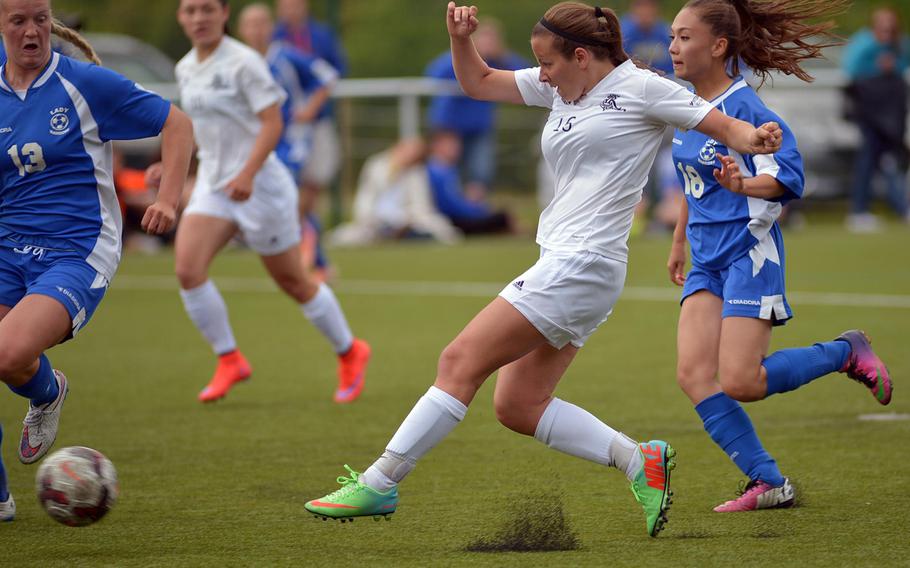 Ramsteins's Samantha Heisey puts the Royals up 1-0 against Wiesbaden as Catherine Klein, left, and Allison Braden try to defend. Ramstein won 4-0 to advance to the final against Patch. (Michael Abrams/Stars and Stripes)

Patch and Ramstein will face off yet again for the DODDS-Europe Division I girls’ soccer crown, keeping alive a rivalry that stretches back before any of the girls who will take the field Thursday were even in high school.

Patch downed newly promoted Division I contender Naples 4-0 in the first D-I semifinal of the day. Ramstein followed up by taking down Wiesbaden with an identical score line to assure another shot at glory.

The two schools will face each other in the final for the sixth straight season.

Patch 4, Naples 0: Despite its status as a perennial title contender, Patch was nonetheless nervous entering its semifinal against Naples.

“At first we were all scared and intimidated because it’s Naples, and we know that they’ve won five consecutive years,” sophomore midfielder Danielle Mannier said. “So we wanted to come out there strong.”

And so they did.

Mannier connected with junior Kaitlyn Farrar for an opening goal that helped shake off some of the nerves.

Later, Farrar muscled past the defense and, in a one-on-one with the goalie, blasted the ball into the net to put the Panthers up by two before the first half expired.

A Naples handball early in the second half proved a costly mistake from which the Wildcats had almost no chance of recovering. Farrar booted the resulting penalty in for her third goal.

Naples showed glimmers of the well-connected offense that had won them the D-II crown year over year, but was kept from making any serious shot attempts.

Farrar was taken down twice in the box without a call.

The second takedown poked the ball into open field and the waiting foot of sophomore midfielder Isabella McIlvene, who blasted it through the melee and into the net.

“I didn’t even see it,” Farrar said. “I was on the ground. Literally, my face was buried in turf. I had turf in my mouth.”

The loss was tough but probably not unexpected for Naples, which played only one legacy Division I team in the regular season, a fact that coach Rebecca Lucy said made it difficult to prepare for the level of play they’d find at the tournament.

But even with the loss, they’re still near the top of the D-I heap in their first year playing against the bigger schools.

“I don’t feel that we are not a competitive team,” Lucy said. “Considering that we made it to the top four and we’re going to play for third tomorrow, I’m incredibly proud of the team we have right now.”

Ramstein 4, Wiebaden 0: Even when they don’t mean to score, they do.

After a slow start, the Royals battered the Warriors in the second half with three goals, including one that was meant to be a cross but found its way, unbelievably, into the net.

That and two other goals came off the boot of Samantha Heisey, a senior midfielder who drew first blood in the game’s 32nd minute.

Wiesbaden managed to hold off Ramstein through much of the first half. While managing to find their way into each other’s territory, neither seemed able to generate the momentum needed to score.

Then Heisey broke past a defender on the left side, drove to the goal and effortlessly banged the ball past the Warriors’ surprised keeper.

It was her third goal, though, that had everybody - including her - wondering what had happened.

Alone near the touchline deep in Wiesbaden territory, Heisey lofted the ball toward the middle of the field. The goalie was out of place. The ball sailed over her and everyone else into the far top corner.

“I was trying to cross to be honest,” she said. “I didn’t know it went in until I saw Ebony’s (Madrid’s) face.”

Freshman Kendall Spohr added another to ensure her team equaled Patch’s score from the previous game.

“To us, the score is always zero zero,” Heisey said. “So you have to give it all that you can and trust your teammates.”