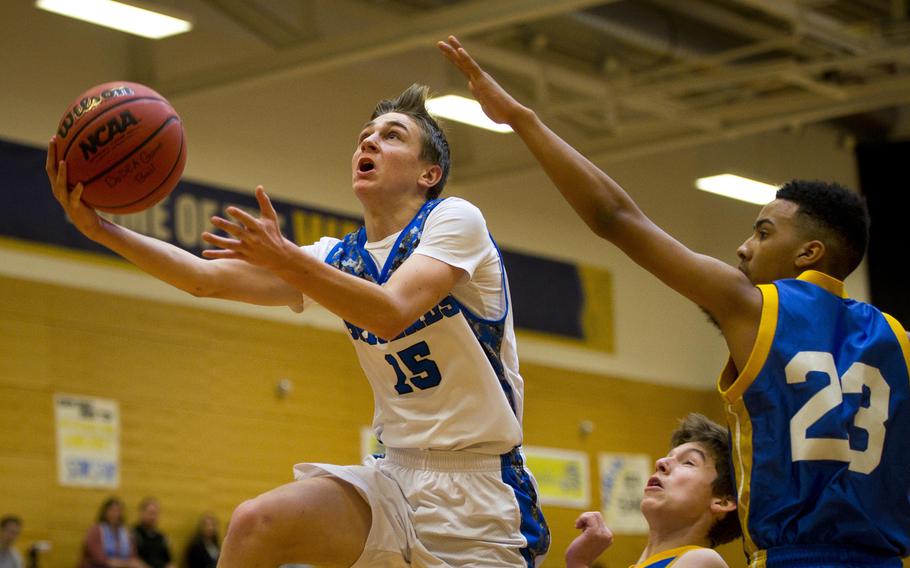 Brussels' Aljaz Urbanc, left, goes for a layup past Sigonella's Sean Solano during the DODEA-Europe basketball championships in Wiesbaden, Germany, on Friday, Feb. 24, 2017. Sigonella won the Division III game 34-30 and clinched a spot in the finals. (Michael B. Keller/Stars and Stripes)

Sigonella will take on Ansbach for the boys title. Baumholder wrapped up its spot in the girls final early and will take on Sigonella, which won a tiebreaker with Brussels and Alconbury.

BoysSigonella secured its spot in the final and ousted defending champion Brussels from the bracket with a 34-30 defeat of the Brigands on Friday afternoon.

The Jaguars first shook up the small-school round-robin bracket Thursday night with a 44-43 defeat of the Baumholder Bucs, the division’s season-long frontrunner.

Ansbach finished off the Bucs on Friday morning with a 42-32 win that clinched its own berth in the championship game. Ogden Andrew scored 20 of his 22 points in the second half, including three three-pointers in the third quarter, to lead the Cougars to the key victory.

The Jaguars and Cougars opened the tournament Wednesday with an early-morning round-robin matchup. Ansbach won that game 38-35.

Ansbach is back in the title game for a second straight season, having lost to Brussels in last year’s edition. Sigonella is eying its second title in three seasons; the Jaguars won the 2015 crown, then finished third a year ago.

GirlsBaumholder locked up its spot early Friday with a 27-18 defeat of Brussels, then accepted a meaningless – for them, at least – loss to Alconbury, 16-10.

That loss did keep the Dragons alive for a few more games, though. In fact, had Alconbury defeated Hohenfels in its final round-robin game, it would be playing in the finals. Instead, the Tigers’ 37-29 victory sent the Dragons into a three-way tie with Sigonella and Brussels, all at 3-2. Each team beat one of its foes and lost to another, leading to another tie-breaker. Sigonella and Brussels each had plus six-point differentials in those games, but Alconbury’s was minus 12. With two teams left, Sigonella advanced due to the 22-12 victory over the Brigands on Wednesday.

The Bucs are playing for their second title in the last three years. They beat Sigonella for the 2015 crown, then finished third a year ago.