Season opens with almost everyone in hunt 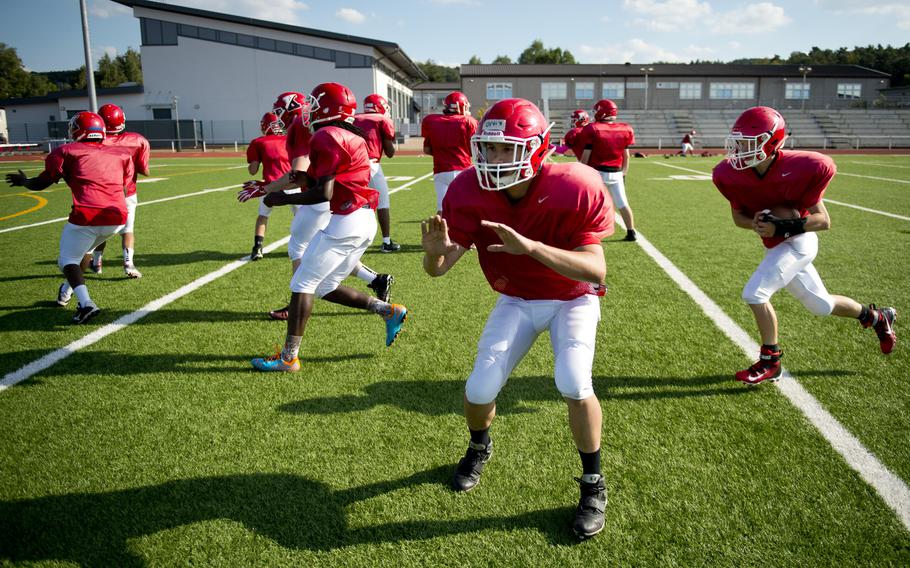 The Kaiserslautern Raiders run offensive plays during practice at Vogelweh, Germany, on Tuesday, Aug. 30, 2016. (Michael B. Keller/Stars and Stripes)

The Kaiserslautern Raiders run offensive plays during practice at Vogelweh, Germany, on Tuesday, Aug. 30, 2016. (Michael B. Keller/Stars and Stripes) 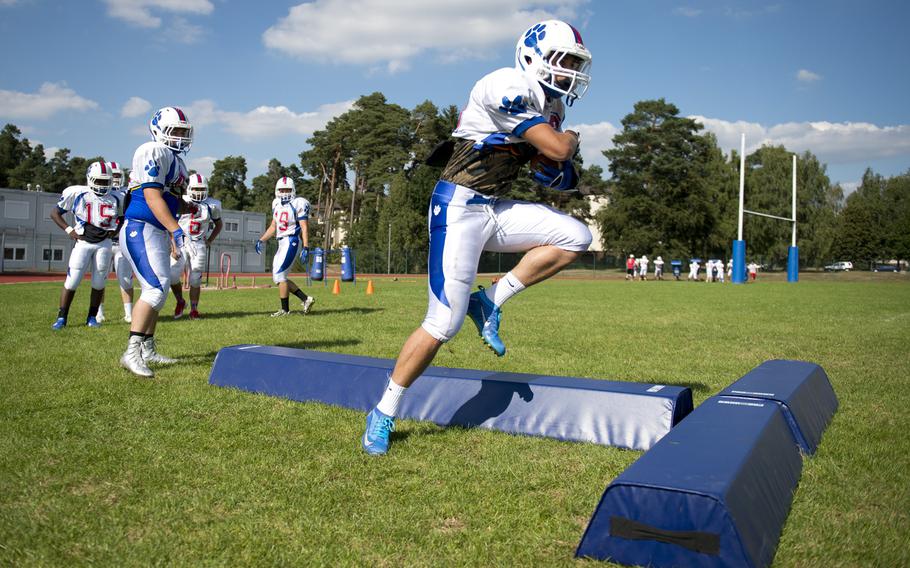 Ramstein practices at Ramstein Air Base, Germany, on Tuesday, Aug. 30, 2016. (Michael B. Keller/Stars and Stripes)

The 2016 DODEA Europe Division I football season has a tough act to follow.

That’s because the 2015 season featured seemingly every iteration of drama possible to squeeze into one two-month football season. All six teams won at least once during the season. All three of the final week’s games carried postseason implications. The undefeated defending champion was bounced from the semifinals on its home field. The champion, Stuttgart, won the title on two straight last-minute field goals.

Now, those same six schools are back to do it again.

The schedule kicks off Saturday with three games, as the Kaiserslautern Raiders visit the archrival Ramstein Royals, the 2015 runner-up Wiesbaden Warriors visit the Lakenheath Lancers in a semifinal rematch and the defending champion Panthers take on the host Vilseck Panthers.

As with last year, that opening-week slate won’t count toward playoff qualification. That portion of the schedule begins the following weekend, the start of the five-week round-robin schedule that will send the top four finishers to the divisional semifinals the weekend of Oct. 28. The European championship game is set for Saturday, Nov. 5, at Kaiserslautern.

The school that will host that event would love to also participate in it, especially after being one of just two teams to sit out last year’s raucous postseason. But the Raiders are bracing for another rebuild, this time under new head coach Lin Hairstone, after backsliding to a 1-5 record last year.

Vilseck, the other team excluded from the 2015 semifinals, has less ground to reclaim. The Falcons finished 2-3 in Division I, all square with eventual champ Stuttgart and semifinalist Lakenheath, before falling victim to unfavorable tiebreaker math.

But even in their current run of losing seasons, the Falcons have remained a formidable opponent on a game-to-game basis. That figures to hold this year, as coach Jim Hall returns a senior-heavy squad built around the solid run game and hard-nosed line play that have become Vilseck’s signature style.

Lakenheath made the jump last year that the Raiders and Falcons are now hoping to complete. The Lancers’ task this year is to maintain their status. Long a Division I doormat, Lakenheath stormed into the postseason with a stunning late-season shutout of eventual champion Stuttgart and delivered a very respectable showing in a 27-16 semifinal loss to Wiesbaden.

Running back Marcus Smith is back to lead another Lancers charge, and the junior standout is joined by a crew of proven seniors looking to cement Lakenheath’s newfound place of Division I contender.

Further progress by Lakenheath, or resurgences by Kaiserslautern or Vilseck, will need to come at the expense of DODEA Europe’s preeminent football powers: Ramstein and Wiesbaden.

Ramstein faltered in the 2015 semifinals after winning the 2014 championship, but the core of a contender remains.

Carter Hollenbeck, the mastermind behind a Royals defense that blanked Wiesbaden in the 2014 title game and yielded just eight points per game in 2015, takes over as head coach. Even a slight offensive uptick could land the Royals back in the championship game.

Wiesbaden coach Steve Jewell, meanwhile, will continue to unleash arguably DODEA Europe’s most versatile offensive attack in hopes of returning to the title game for a fourth straight season. The Warriors won the 2013 crown but have lost the past two finales.

The Warriors have Stuttgart to thank for last year’s loss. The Panthers crawled into the 2015 postseason with a losing divisional record before producing their dramatic and unexpected championship run.

In theory, such a spirited season could leave the program with lingering momentum for a repeat. Alternately, it could lead to an emotional letdown the following fall. In reality, however, there’s likely very little carryover from 2015, because this team is almost entirely new.

Coach Billy Ratcliff has just five players back from last year and enters the year with a depth chart far shorter than he’d prefer. Whatever was accomplished last fall, the goals in Stuttgart are simple: build effective lineups on both sides of the ball, stay competitive all season and have a chance to reach the postseason.

As a new season nears kickoff, those are goals shared by all six squads in the Division I ranks.