Royals, Lancers to hook up again 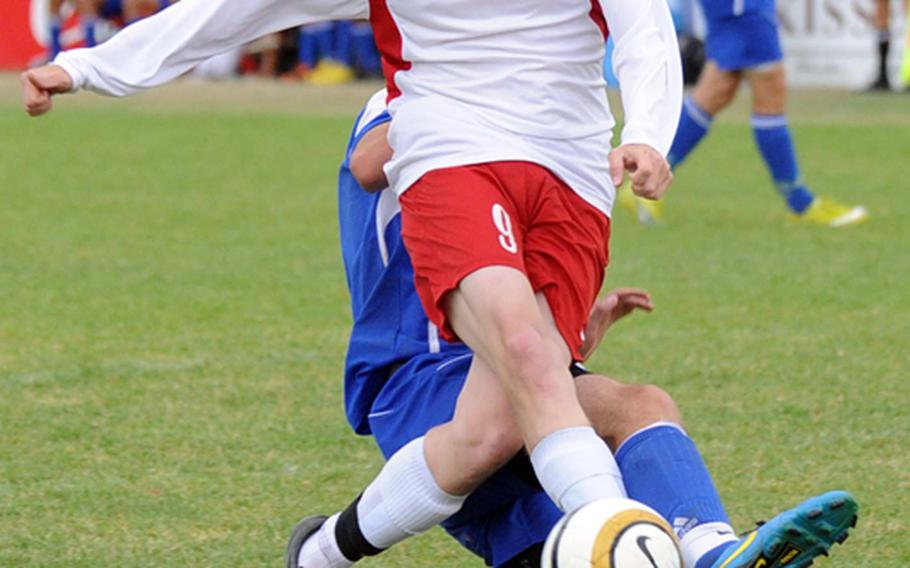 Buy Photo
Wiesbaden's Jeffrey Holt manages to get a foot in to stop a shot by Lakenheath's Jonathan Batzer. Lakenheath won the Division I semifinal, 2-0, to advance to Saturday's final against Ramstein. (Michael Abrams/Stars and Stripes)

Buy Photo
Wiesbaden's Jeffrey Holt manages to get a foot in to stop a shot by Lakenheath's Jonathan Batzer. Lakenheath won the Division I semifinal, 2-0, to advance to Saturday's final against Ramstein. (Michael Abrams/Stars and Stripes) 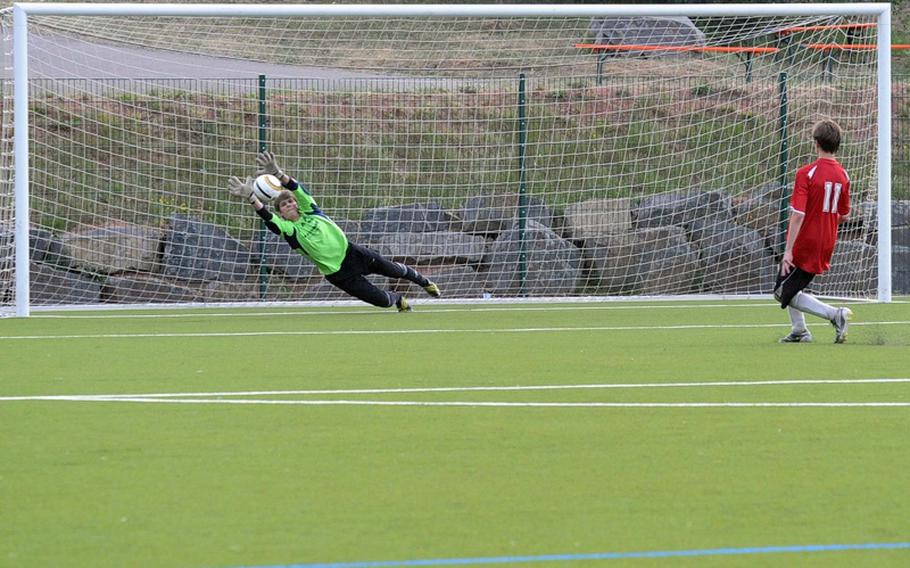 Buy Photo
Ramstein keeper Kyle Borda stretches to stop a penalty shot by ISB's Stijn Kruidenier in a semifinal shootout on Friday. Borda stopped two ISB shots and teammate Christian Arroyo put away the final goal as Ramstein won the shootout, 4-3, after the game ended in a 1-1 tie. (Michael Abrams/Stars and Stripes)

REICHENBACH-STEEGEN, Germany &ndash; Thanks to Ramstein&rsquo;s and Lakenheath&rsquo;s semifinal victories on Friday evening, England&rsquo;s Cross of St. George flag will be on the line for the second time this season at 6:45 p.m. Saturday, when the Lancers and Royals clash for the 2011 DODDS-Europe boys&rsquo; Division I soccer championship.Ramstein clawed its way past No. 2 seed International School of Brussels, 4-3, on penalty kicks after the teams had played for more than an hour tied at 1-1. For its part, Lakenheath, behind first-half goals by Joe Sullivan and Jordi Davis, blanked No. 4 Wiesbaden, 2-0.The Cross of St. George, the national flag of England, is an unofficial traveling trophy which goes to the head-to-head winner between the two schools. Going into the D-I showdown, Ramstein holds the banner on the strength of its 2-1 victory over Lakenehath on April 29.There was lots more on Ramstein&rsquo;s mind Friday, however, than retaining the trophy. The Royals had their hands full with a relentless ISB team which answered Jake Mattison&rsquo;s first-half goal with one by Alessandro Pryce and then proceeded to pepper Ramstein keeper Kyle Boorda the rest of the game.Boorda made 21 saves over the 100 minutes of regulations and two overtimes, then made two more when it counted most. In the five-player shootout to decide the game, Boorda saved two PKs and nearly deflected a third shot over the crossbar.&ldquo;It&rsquo;s mainly anticipation,&rdquo; Boorda said of his success against the nearly automatic PK. &ldquo;We practice this stuff every week.&rdquo;ISB went first in the shootout, and Lukas MacNaughton left Boorda grasping air. But after Andrew Fitrzpatrick equalized for Ramstein, Boorda took over.He started with Pryce, stretching out in a dive to his left to deflect Pryce&rsquo;s low drive which was headed inside the right post. Christian Faaborg then beat Boorda, but the Ramstein keeper made a stretch to his right to deflect the attempt Stijn Krudier and put the Royals in the driver&rsquo;s seat.With Cameron Hansen and Mattison having converted for Ramstein in the meantime, it would have been game, set and match had Drew Guffey been able to convert. Guffey, however, rang his shot off the left post, so it was up to Chritian Arroyo to nail the game-winner. He did.&ldquo;That&rsquo;s the first shootout I&rsquo;ve ever won,&rdquo; smiled Ramstein coach Dan Nukala, who&rsquo;s retiring after this tournament after 18 years at the Royals&rsquo; helm.Things were far more workmanlike for Lakenheath, which was left contemplating a shot at revenge at Ramstein.Sullivan, who has scored five goals in his five games here, isn&rsquo;t worried about fatigue or Ramstein&rsquo;s home-field edge on Saturday.&ldquo;We&rsquo;ll be all right,&rdquo; he said.bryanr@estripes.osd.mil