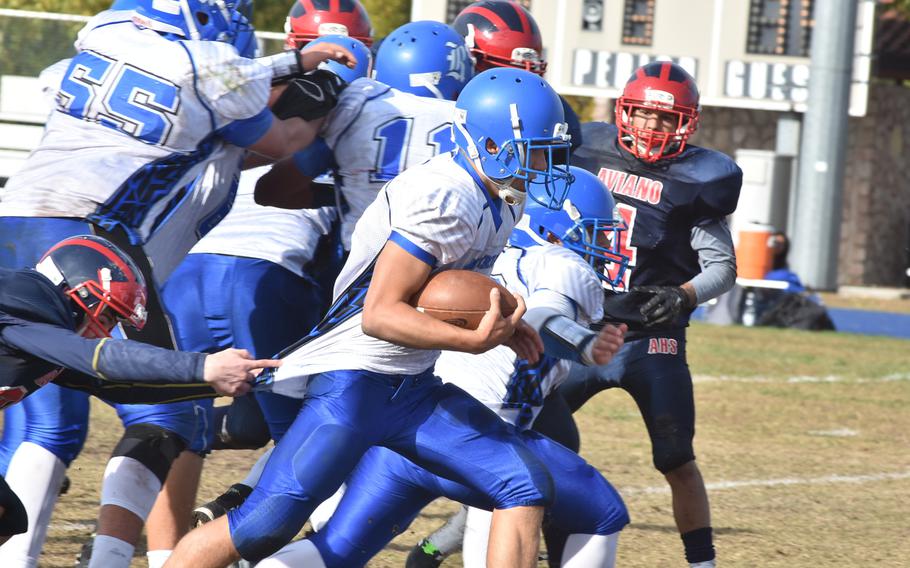 Buy Photo
It took more than a weak grip on his jersey to keep Rota quarterback Wes Penta from scoring on this play Saturday in the Admirals' 26-21 victory over Aviano. (Kent Harris/Stars and Stripes)

Buy Photo
It took more than a weak grip on his jersey to keep Rota quarterback Wes Penta from scoring on this play Saturday in the Admirals' 26-21 victory over Aviano. (Kent Harris/Stars and Stripes) 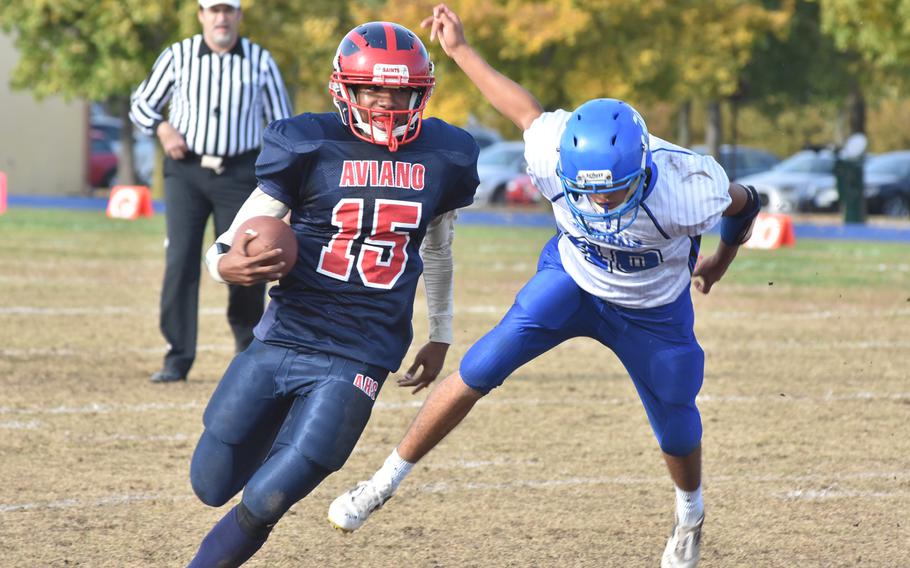 Buy Photo
Aviano's Donavin Robinson eludes the tackle of Rota's Joe Perches on Saturday in the second half of Rota's 26-21 victory that sent the Admirals into the Division II championship game. (Kent Harris/Stars and Stripes) 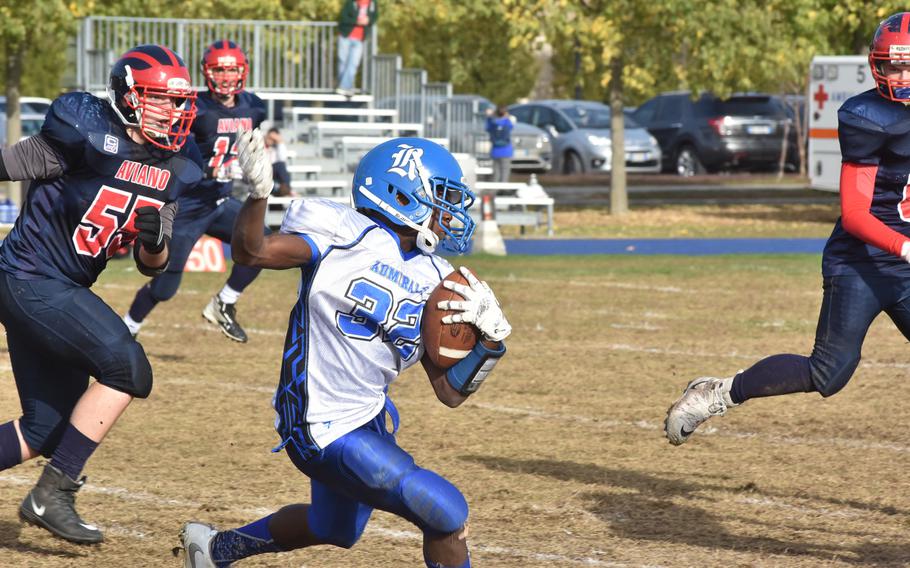 Buy Photo
Rota sophomore running back Cameron Wilson was hard to bring down Saturday, rushing for a game-high 208 yards in the Admirals' 26-21 victory over Aviano. (Kent Harris/Stars and Stripes) 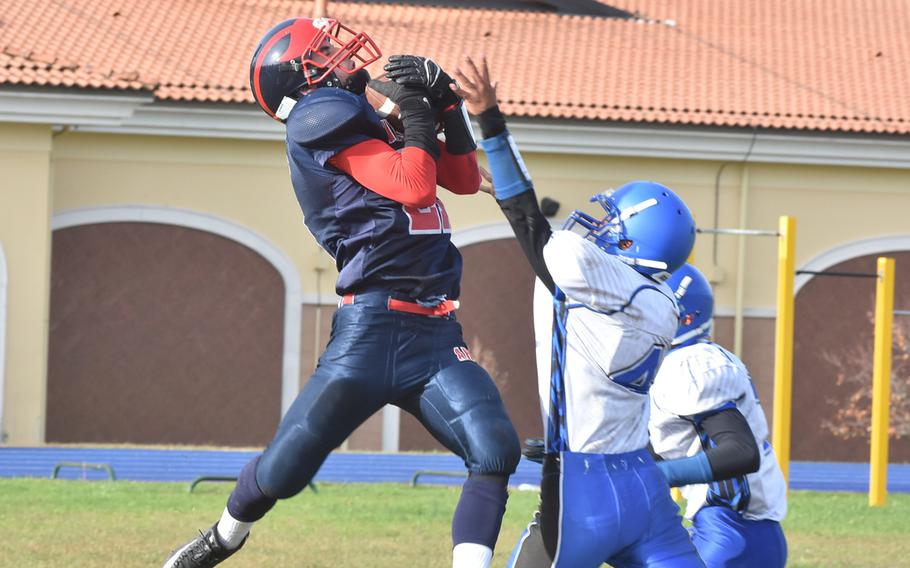 Buy Photo
Aviano's Antonio Perales catches a pass from Mason Shine on the 1-yard-line while defended by Rota's Sammy Molina in the Admirals' 26-21 victory Saturday. (Kent Harris/Stars and Stripes) 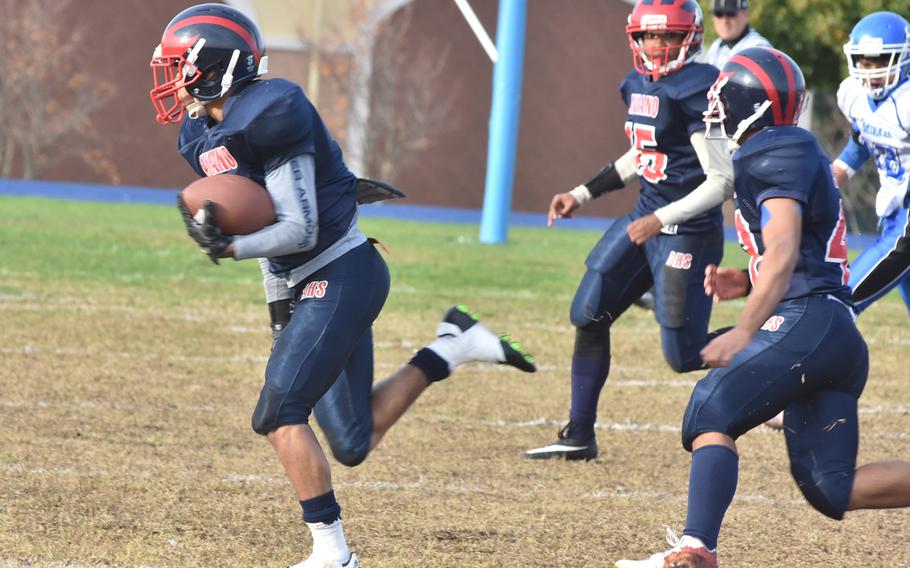 Buy Photo
Aviano's Mickey Moore breaks free for a few of his team-high 118 yards in the first half Saturday in the Saints' 26-21 loss to Rota. (Kent Harris/Stars and Stripes)

AVIANO AIR BASE, Italy – It didn’t exactly go as planned.

Facing a third-down-and-9 on the 10-yard line with less than a minute left on the clock and his team down by a point, Rota’s Cameron Wilson was supposed to pitch the ball to a teammate. But he had trouble controlling the ball. And a few teammates weren’t carrying out their parts on the play anyway.

Wilson somehow avoided three tackles in the backfield and several more on his way to the end zone as the Admirals rallied for a 26-21 victory over Aviano that sends Rota into the Division II title game next weekend.

“I didn’t think I was going to score a touchdown either,” the 5-foot-6, 153-pound sophomore said. “I just knew everyone was counting on me, and I had to get it done.”

“We blocked it wrong, it went the wrong way … Cam just made a heck of an individual effort,” Rota head coach Ken Walter said.

Unfortunately for the Saints, the winning score was symbolic of the way they failed to corral Wilson the entire game. He finished with 20 carries for a career-high 208 yards. And those totals don’t include two long touchdown runs called back by penalties.

Wilson didn’t play against the Saints in the Admirals’ 33-30 loss to Aviano on the same field on Oct. 14. Nor did he play against Spangdahlem in the Sentinels’ 48-6 victory over Rota on Sept. 23.

He didn’t take long to make an impact Saturday. Rota received the opening kickoff, and Aviano jumped offsides on the first play from scrimmage. On the second, Wilson went 48 yards into the end zone and ran for a two-point conversion on the next play.

Aviano scored four plays later to tie it. Mickey Moore scampered 36 yards into the end zone and Mason Shine connected with Giacomo Fabbro for the two-point conversion. After a Rota punt, Shine – who completed 9 of 22 passes for 112 yards – connected with Antonio Perales on a 30-yard pass play to the 1-yard line. Moore scored on the next play and Aviano was up 14-8 after a failed conversion.

Shine was an efficient 11 of 15 for 165 yards the first time the two teams met and Rota noticed.

“We wanted to force them to run the ball,” assistant coach Luke Spencer said. “And they ran it very well. The game came down to two or three plays that could have gone either way.”

One of those plays again belonged to Wilson. After the two teams exchanged possessions, Rota tied the game on Wilson’s 35-yard run.

The Admirals went ahead in the second half when Ray Reyes picked off a Shine pass – the game’s only turnover – to set up a five-play drive capped by Wes Penta’s 30-yard quarterback keeper right up the middle of the Saints’ defense.

Aviano then put together its longest drive of the game, converting three fourth down plays in going 64 yards on a drive capped by Donavin Robinson taking an option pitch from Shine and racing into the end zone from 9 yards out. Fabbro’s extra-point kick put Aviano up 21-20.

The teams then exchanged possessions before Rota’s final drive. Aviano got the ball back with less than a minute to play, but failed to move the ball appreciably and the clock ran out after a completed pass at midfield and a botched attempt to stop the clock.

The Saints finished the season at 6-1 after not winning a game a season earlier.

“Our kids had a great season,” coach Rick Dahlstrom said. “We’re very proud of them. Rota played a great game and it could have gone either way. We just fell short.”