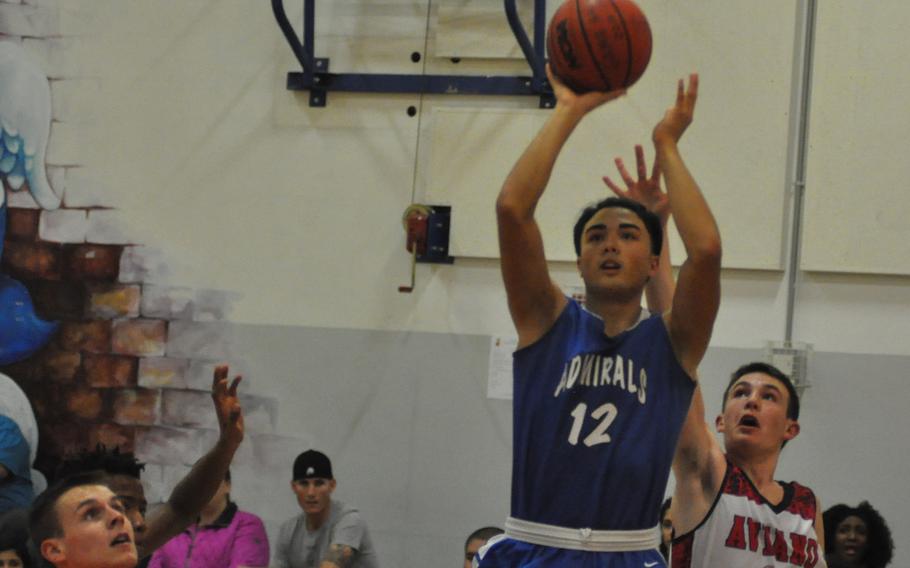 Buy Photo
Rota's Jake Anderson gets up a shot Thursday, despite Aviano's Mason Shine trying to get a hand in the way in the Admirals' 63-23 victory in Italy. (Kent Harris/Stars and Stripes)

Buy Photo
Rota's Jake Anderson gets up a shot Thursday, despite Aviano's Mason Shine trying to get a hand in the way in the Admirals' 63-23 victory in Italy. (Kent Harris/Stars and Stripes) 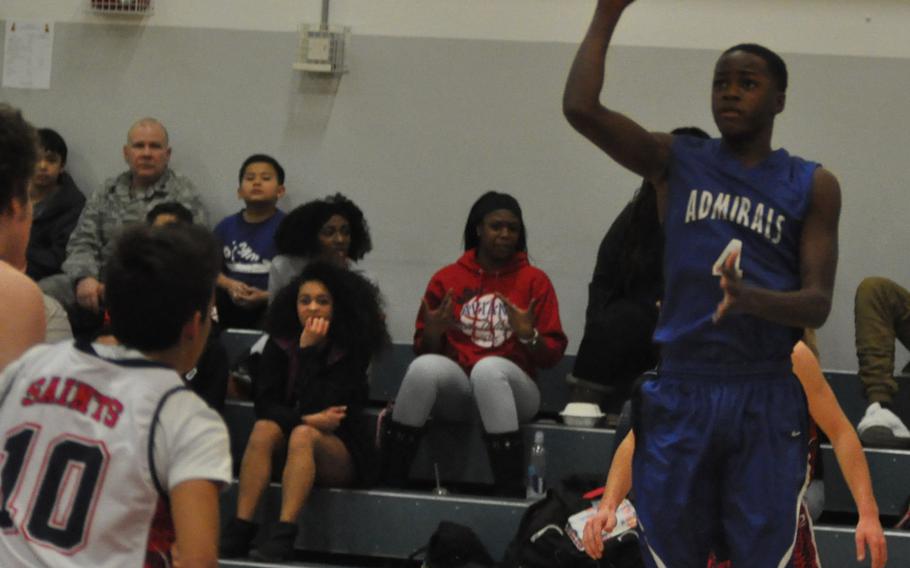 Buy Photo
Rota's Levante Chester puts up a one-handed shot Thursday in the Admirals' 63-23 victory over the Aviano Saints in Italy. (Kent Harris/Stars and Stripes) 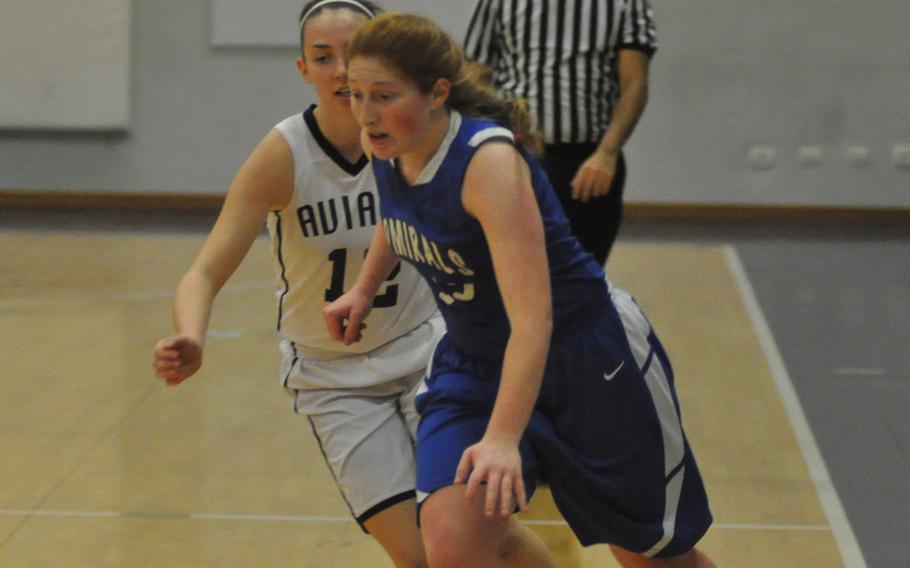 Buy Photo
Rota's Emma Hook drives toward the basket in the Admirals' 47-31 victory Thursday over the Aviano Saints in Italy. (Kent Harris/Stars and Stripes) 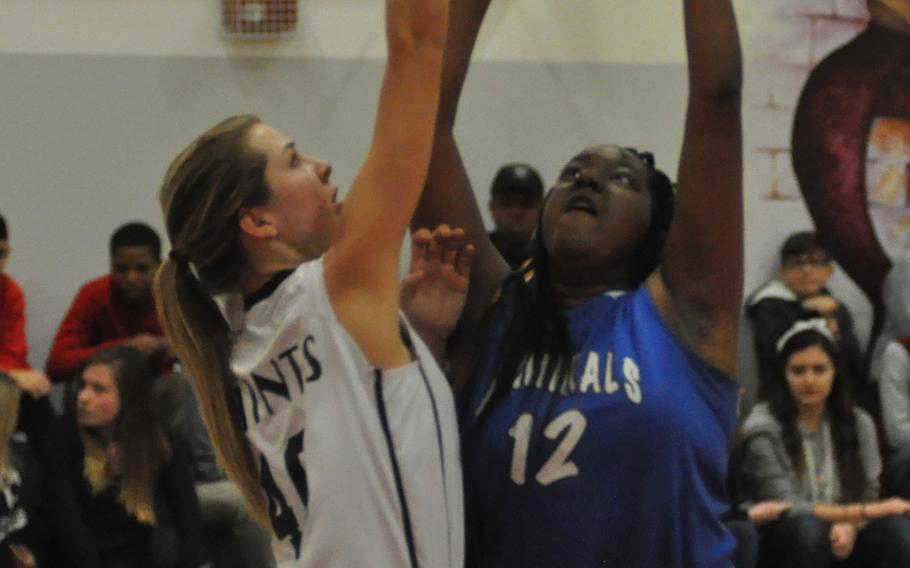 Buy Photo
Rota's Laniyah Chester muscles up a basket - part of her game-high 15 points - in the Adrmirals' 47-31 victory over the Aviano Saints on Thursday in Italy. (Kent Harris/Stars and Stripes) 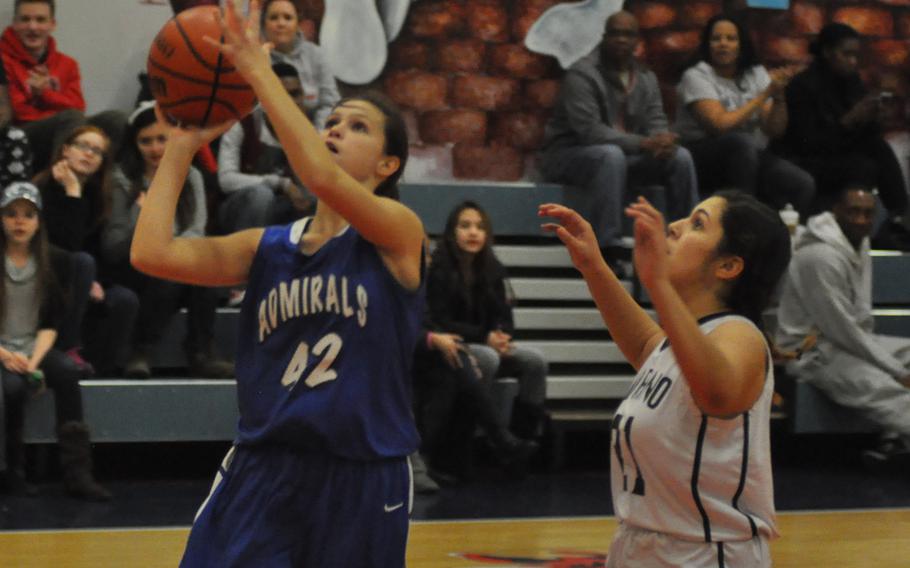 Buy Photo
Rota's Sophia Restivo puts up a shot Thursday in the Admirals' 47-31 victory over Aviano. (Kent Harris/Stars and Stripes)

AVIANO AIR BASE, Italy – One school was playing its first games of the season Thursday against DODEA-Europe competition. The other one didn’t provide a lot of competition for them.

Rota routed the homestanding Aviano Saints in a pair of games that marked the DODEA basketball season debut for the Admirals. The girls started things off by racing to a 17-4 first-quarter lead in a 47-31 victory that could have been much more lopsided. Then the boys topped that with a 20-5 advantage after one period en route to a 63-23 triumph.

“The best offense is a good defense,” Rota girls coach Edward DeMeritt said after his team forced the Saints into 48 turnovers. Many of those came from a full-court press that Rota stopped in the second quarter as it began liberally substituting.

Center Laniyah Chester was too much for the Saints inside, with a game-high 15 points and nine rebounds. But point guard Deja Wilson (13 points, nine steals) and wing Emma Hook (14 points) might have been even more deadly, continually forcing turnovers that led to a bunch of easy baskets and kept the Saints from even starting their offense.

DeMerritt said the Admirals, hundreds of miles away from the nearest American base with a high school, have only played a handful of games this season against Spanish clubs. But the work in practice on the press paid off.

Aviano, missing guard Shalatheia Thomas due to illness, didn’t actually fare too badly once it got into its offense. But the Saints were down almost double digits before they even got a shot off.

Sophomore Tianna Link had a team-high 14 points and a game-high 13 rebounds for Aviano, which fell to 1-6 on the season.

Pressure was key in the boys game as well, as the Admirals scored a series of easy baskets off Aviano turnovers in the opening minutes.

It took Rota a few minutes to solve Aviano’s zone defense, but it thrived on shots near the basket after that.

Rota coach Ben Anderson said the Admirals want to get all they can from the three games they’ll play in Aviano – the only DODEA competition they’ll see until the European championships at the end of February.

“Compete and improve every game,” he said of the goals for the trip, which will include games against Marymount and American Overseas School of Rome on Friday and Saturday. “We don’t get a lot of games. So we need to take advantage of the ones we do get.”