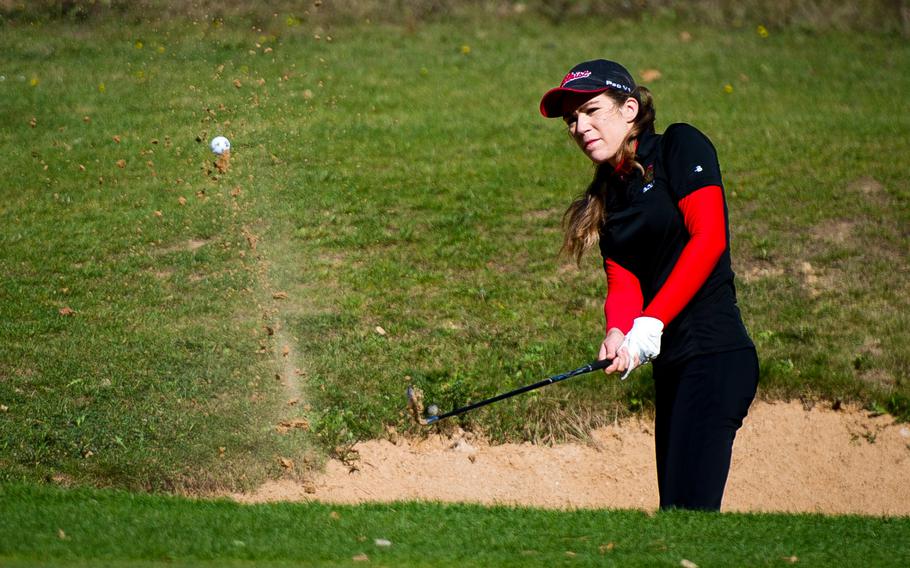 Kaiserslautern's Jasmin Acker chips a shot from a sand bunker during the DODEA-Europe golf championship at Rheinblick golf course in Wiesbaden, Germany on Oct. 5, 2016. (Michael B. Keller/Stars and Stripes)

Golf is DODEA-Europe’s shortest season and will be the first of the 2017-18 school year to crown champions. The European golf championships are set for Oct. 12 and 13 at Wiesbaden’s Rheinblick Golf Course. As the season begins, the respective boys and girls golf fields could not be more different. Two-time defending champion Jasmin Acker of Kaiserslautern headlines the girls ranks. After narrowly winning her first title as a sophomore, Acker pulled far away on the leaderboard as a junior with a comfortable 11-stroke victory for her second straight European crown. Acker lost her primary nemesis over the summer with the exit of Leigha Daryanani, the former Bitburg standout who memorably dueled Acker for the 2015 title and finished a solid third last fall. But the reigning champ will face some measure of resistance from a solid field including Sydney Smith, a Stuttgart senior and steady finals contender, and a contingent from Ramstein, the defending girls team champions. While Acker seems set to complete her three-year reign atop DODEA-Europe, the organization’s boys field is far less predictable. Stuttgart’s Jordan Holifield rounded out his impressive four-year sweep of the European title last fall with a dominant 22-point victory in the finals. His graduation means a new champion will be crowned in DODEA-Europe boys golf, and that new champion might come from among the same group that was pursuing him in recent years. Wiesbaden has a strong core of returning varsity players looking to fuel a run at the boys team championship along with a potential individual winner. Junior Bryan Cortese returns after finishing second to Holifield last fall, while fellow junior Finn Swafford will take another swing after a fifth-place showing a year ago. Kaiserslautern’s Kaden Senkbeil has a chance to improve on his fourth-place showing in 2016, while Stuttgart senior Frank Whitworth will lead the Panthers’ bid to repeat as boys team champions. broome.gregory@stripes.com Twitter: @broomestripes