Buy Photo
Ramstein's Drew Guffey, left, and Kaiserslautern's Erik Langholz battle for the ball in a game at Ramstein on Saturday. Ramstein won 4-0 in both Division I teams' final game before the DODDS-Europe championships. (Michael Abrams/Stars and Stripes)

Buy Photo
Ramstein's Drew Guffey, left, and Kaiserslautern's Erik Langholz battle for the ball in a game at Ramstein on Saturday. Ramstein won 4-0 in both Division I teams' final game before the DODDS-Europe championships. (Michael Abrams/Stars and Stripes) 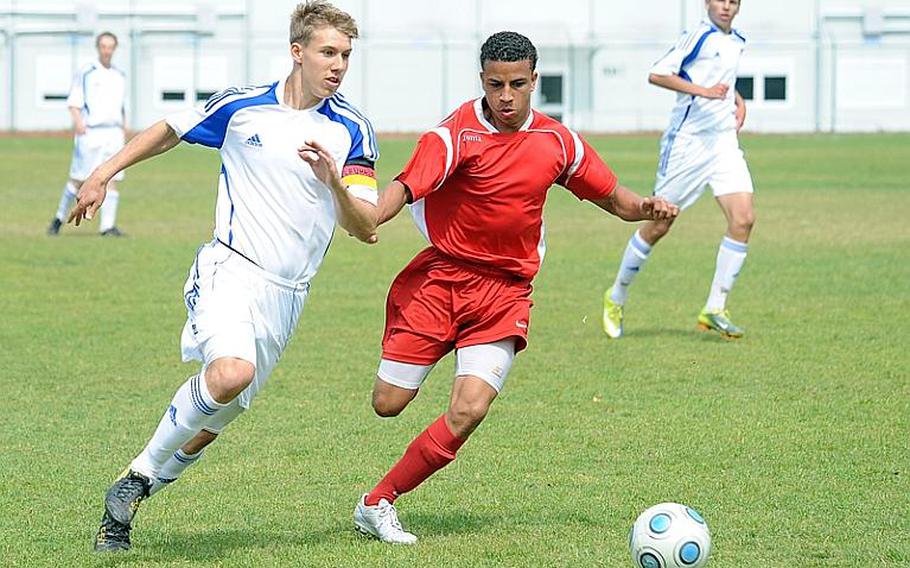 Buy Photo
Ramstein's Jonathon McLouth, left, tries to get by Kaiserslautern defender Dominique Williams in Ramstein's 4-0 win over the Raiders on Saturday. (Michael Abrams/Stars and Stripes)

Defending European D-II champion American Overseas School of Rome lost its first game of the season Saturday, 3-1 to Naples. The other champion to fall, reigning D-I king SHAPE, made less of a thud. The Spartans had already lost one game and tied another this season prior to their 2-0 blanking Saturday at the International School of Brussels.

Naples 3, AOSR 1: Saturday at Naples, Nigel Alexander broke a 0-0 halftime tie with a 47th-minute goal, then with precision throw-ins set up a score by Regan Campbell six minutes later and one by Jasper Bergwerff some 22 minutes after that to lift the Wildcats over the Falcons.

ISB (5-0, 4-0) clinched the Region I title and goes into this week&rsquo;s European D-I tournament seeded just behind fellow unbeaten Ramstein, which tied SHAPE 1-1 on the road earlier this season.

SHAPE, which dropped a 1-0 verdict to Lakenheath the previous week, goes into the tourney hoping to defend its D-I crown with a 3-2-1 overall mark. The Spartans completed their Region I slate at 3-2.

Lakenheath 1, Alconbury 0: Saturday at Alconbury, a first-half penalty-kick conversion by All-European Jordi Davis was the only shot to get past overworked but far from overmatched Alconbury goalkeeper Gabe Sirwinski.

&ldquo;The Lancers controlled much of the game and created several great chances,&rdquo; Alconbury coach Jeff Black wrote in an email about his D-III team&rsquo;s game against their guests, who are D-I contenders. &ldquo;But &hellip; Sirwinski was on his game and came up big with save after save.&rdquo;

Ramstein 4, Kaiserslautern 0: Saturday in Ramstein, All-European Jonathan McClouth broke loose for two goals to lift the unbeaten Royals (5-0-2 overall, 4-0-1 in Region II) to the regional championship and the No. 1 seed for this week&rsquo;s European D-I tournament.

&ldquo;K-town&rsquo;s defense bottled up the Royals&rsquo; attack in the first half and continued to apply pressure the entire game,&rdquo; Ramstein coach Dan Nukala wrote in a Saturday email.

However, Ramstein&rsquo;s defense was even better. Led by Christian Arroyo and Dennis Dooley, the Royals &ldquo;&hellip;made it difficult for the Raiders to gain any offensive traction,&rdquo; Nukala wrote.

Jake Mattison and Chritian Turain also scored for Ramstein in a game the Royals led just 1-0 at the half.

Kaiserslautern, like Ramstein ticketed for this week&rsquo;s Division I tournament to be played at several sites in the Kaiserslautern military community, finished the regular season 2-4-1 overall and 2-2-1 in Region II.