Patch wrestlers come out on top in rivalry match 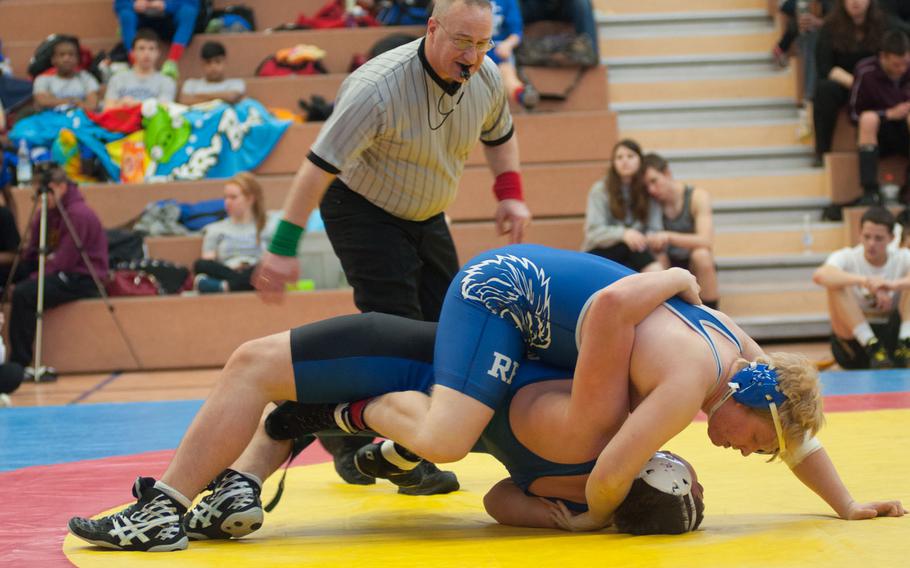 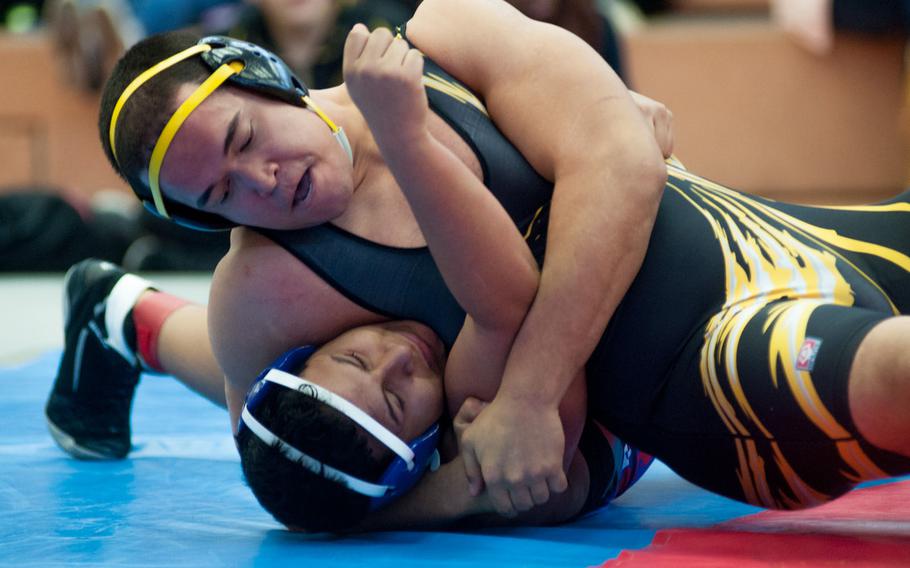 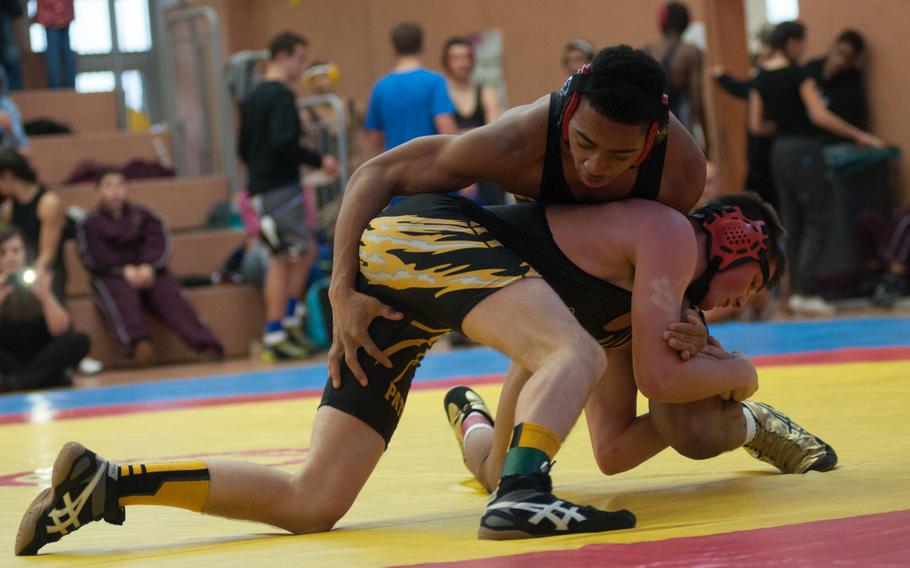 Vilseck's Austin Weatherspoon defends against a solid shoot from Patch's Brandon Vanderlaan during their midday match at Vilseck High School, Jan. 24, 2015. Weatherspoon came away victorious from that meet up, finishing 2-2 on the day. (Michael S. Darnell/Stars and Stripes) 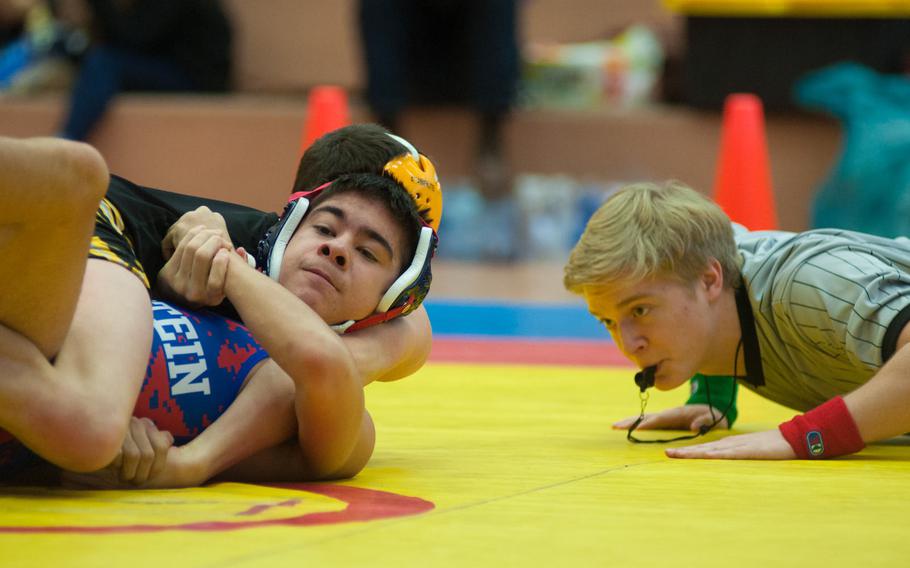 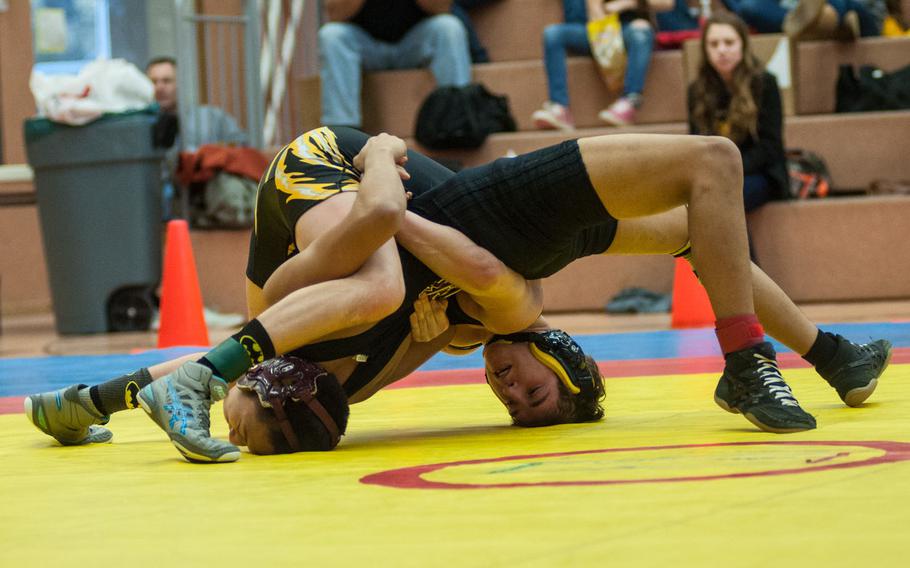 VILSECK, Germany - Before Saturday’s DODDS-Europe wrestling meet at Vilseck, Ramstein coach Steve Kennedy said it would be nice if the Royals were the ones to put an end to Patch’s dominance on the mat.

Alas for the Royals, that was not in the cards.

But perhaps Kennedy can take solace in the fact that of the six gathered teams on hand for Saturday’s match, Ramstein was the big speed bump on Patch’s highway to victory.

The Panthers continued their winning way by eking out a 223-220 points victory over their rivals from across the division. Those three scant points showed how far the Royals have come since even just two weeks ago when the Panthers won out by 61 points in another multi-team meet. Still, though the scores were tight at the end of the evening, the day belonged to the Panthers. Star grappler Eli Spencer continued his undefeated streak, improving to 18-0 in the 195-pound weight class. One of several team captains, Spencer’s decisive victory over Ramstein’s Steel Wilson made a case that he might be the best wrestler in Europe right now. “I just do it for the competition,” Spencer said. “I mean, I do like to win, but competition is what I’m here for and it’s why a lot of our guys wrestle.”

It’s important to note that when talking about the Panthers wrestling squad, there are any number of grapplers who could end up as the best in their weight class. There are Christopher Matzke (120), Johnathan Brabazon (132), Robert Call (138), Kevin Wentlan (160), Matt Cass (170) , Brian Mogavero (285) and of course, defending European champion, Matt Bolduc at 126. Those wrestlers combined for 18 wins on Saturday without taking a single loss. Some teams dream about days like that whereas for Patch, it was just another day at the office, so to speak. “We know every opponent is a challenge,” Bolduc said. “Every match is important, but you have to stick to your game plan and work your moves. Every match.” The Panthers remain undefeated this year, but the Royals close matchup showed that they’re anything but invulnerable. Ramstein's Andres Rios (152) won his weight class, as did Dillon Thompson (182) and Christian Rivera-Nales (145). Rivera-Nales in particular had a tremendous showing, beating out Vilseck’s Austin Weatherspoon (145) in what was easily the most exciting match of the day. Their final match went into double overtime, as both poked and prodded for weaknesses that simply weren’t there. In the end, Weatherspoon made one small mistake that Rivera-Nales capitalized on to come away with the victory. “Last time I faced him, I didn’t do so hot,” Rivera-Nales said. “I spent a lot of time with extra conditioning and extras drills to come into today ready to win. The coaches are always pushing me to be more offensive and it worked out.” Weatherspoon finished 2-2 on the day, with a record that doesn’t really reflect his potential to disrupt his opponent’s easy days. Fellow Falcon Elijah Brown (170) took home first place in his class while Blaise Markley (106), Aydan Huezo (113) and Mikhael Ragay (126) ended with second-place finishes. The Hohenfels Tigers had a somewhat rough day, finished with a combined 81.50 points. Connor Gibson (220) was the major spark on that squad, going 3-0 and finishing in first in his class. The Ansbach Cougars compiled 10 points off the backs of Jordan Lennon (126) and Daniel Claybaugh (195). All teams are now beginning to look toward the horizon and at the sectionals coming in just a few short weeks. It’s Patch’s division to lose, and while the Panthers celebrated a hard-fought victory Saturday, coach Normal Matzke knows there are plenty of challenges left for his team to conquer. “They performed well, but we’re taking it one weekend at a time,” he said. “There are a lot of risks with places like Lakenheath, you know we won’t really know them until Europeans. That’s still an unknown for us. We’re looking forward to it.