Patch grabs trophy back from Ramstein Ramstein's Liana Ochoa shoots past Patch's Kaela Lynch in the girls Division I final at the DODDS-Europe soccer championships in Kaiserslautern, Germany. Patch won 2-1 in overtime. (Michael Abrams/Stars and Stripes)

Ramstein's Liana Ochoa shoots past Patch's Kaela Lynch in the girls Division I final at the DODDS-Europe soccer championships in Kaiserslautern, Germany. Patch won 2-1 in overtime. (Michael Abrams/Stars and Stripes) 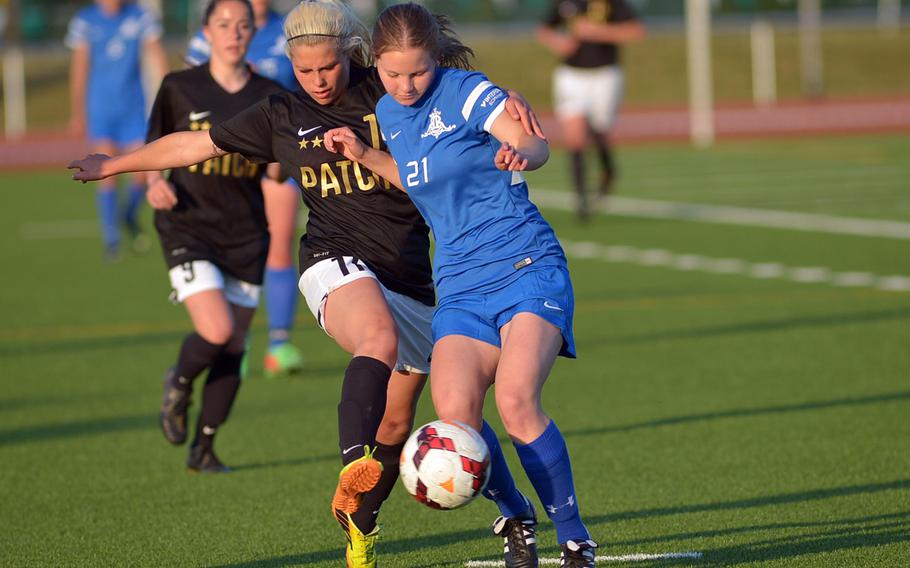 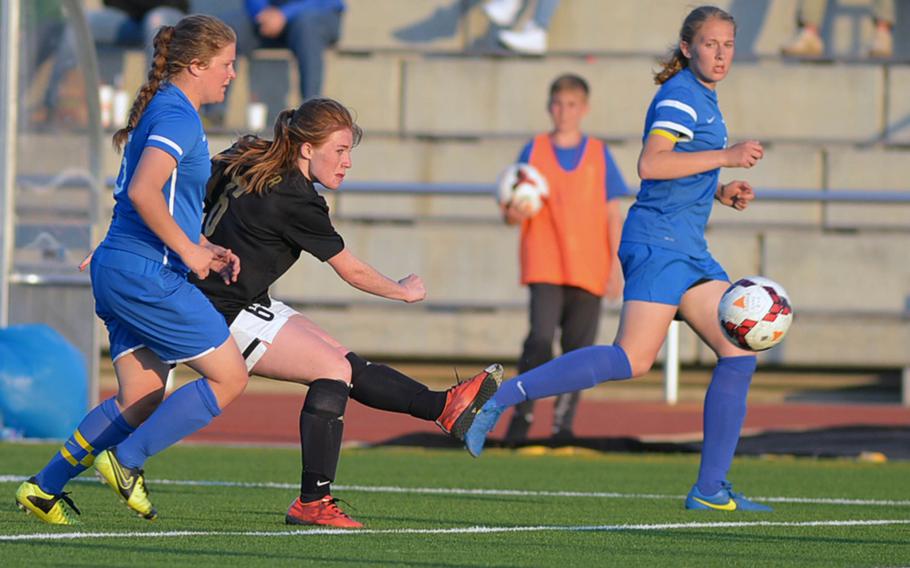 Patch's Danielle Mannier shoots the winning goal in her team's 2-1 overtime win over Ramstein in the girls Division I final at the DODDS-Europe soccer championships in Kaiserslautern, Germany. (Michael Abrams/Stars and Stripes) The Patch Panthers players celebrate their winning the girls Division I championship, beating Ramstein 2-1 in overtime at the DODDS-Europe soccer championships in Kaiserslautern, Germany. (Michael Abrams/Stars and Stripes)

KAISERSLAUTERN, Germany – It took 90 minutes of play for a new champion to be crowned Thursday night in the DODDS-Europe Division I girls’ soccer finals.

For the fifth year in a row, Patch and Ramstein fought it out for the title in a rough-and-tumble match that was decided, 2-1, in overtime, in favor of Patch.

The win returns the crown to the Panthers, who lost to Ramstein 1-0 in last year’s championship game.

Both teams scored their sole goals in regulation during the first half. What followed was a particularly physical second half in which players from both sides got tangled and tripped up and missed numerous scoring chances.

It took Patch sophomore Danielle Mannier about six minutes into the first 10-minute overtime period to end the tie. Mannier punched the ball past Ramstein goalie Erin Soto from the left wing to give the Panthers a lead they would not relinquish.

“I was thinking, ‘Thank, God,’” Mannier said of the game winner. “I didn’t know if it was going in and it went in. I was just so relieved ‘cause the pressure was off. All we had to do was just play defense, and we did it.”

While Patch ended the game on top, the tempo early on favored the Royals, who came out charging. Junior striker Ebony Madrid put Ramstein on the board first.

She drilled the ball past two Patch defenders in front of the goal on an assist from Nique Dubois.

Patch coach Daniel Coapstick said he could see right away that this was a different Ramstein team than the one Patch beat 2-0 in the regular season.

“They were definitely coming on hard the first 10 minutes,” he said. “We just had to reassure the girls and just say, ‘press against it, hold out, hold out.’ They were relentless.”

As the clock wound down in the first half, Patch was finally able to break through Ramstein’s stingy defense, led by Soto, who registered a number of saves on the night.

Senior stopper Whitney Mannier – Danielle’s big sister – found the net on a free kick from the far right side with about two minutes remaining in the first half.

“Oh my gosh, that was everything to me,” Whitney Mannier said of tying up the game.

The Panthers focused on defense in their quest to regain the title.

“We beat them during the season and we knew they were going to come harder and faster and bigger shots and everything, so we were definitely key on defense,” she said.

The Royals took the loss in stride.

“I feel really good,” senior midfielder Samantha Heisey said after the game. “We did everything we could. There’s nothing to be ashamed of. Patch is a great team, we’re a great team, and we gave it all we could.” Madrid said the Royals fought hard – but “we played harder than the ball played. We did the running for the ball. We didn’t pass. We didn’t play our game, I know that.”

Ramstein coach Ricardo Buitrago said the Royals had some unlucky shots. “That second goal, it was unforeseen and unlucky but I’m really proud of the way the girls held it together. They fought to the last second.

“The tournament for us has been phenomenal,” he added. “The girls have been peaking at the right moment. I knew it was going to be a close game.”

For Patch, the excitement of winning back the European title was likely to linger.

“My heart is racing,” said Whitney Mannier. “I am so excited to get on that bus and celebrate our win with my team and come back to school as champions.”