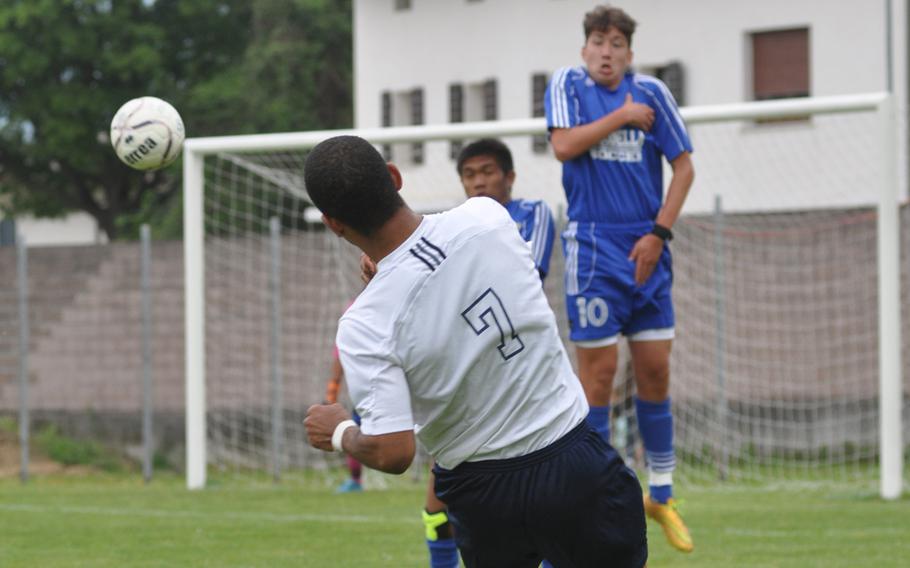 Lorenzo King and the Aviano Saints hope to bend in a few shots when they host Black Forest Academy, Hohenfels and American Overseas School of Rome this weekend. (Kent Harris/Stars and Stripes)

Italy is where the action is this weekend.

Multiple-team, multiple-sport gatherings at the northern Italian outposts of Aviano and Vicenza are the clear highlights of the schedule as DODEA-Europe rounds out April and heads into the final month of the spring and the 2015-16 athletic school year.

Aviano hosts the smaller-division events. German schools Black Forest Academy and Hohenfels make the trip along with American Overseas School of Rome for Friday and Saturday soccer action. On the diamonds, Hohenfels, Ansbach and Sigonella are the guests, though Ansbach doesn’t field a softball team.

At Vicenza, four Division I powers will put their championship hopes to the test. Stuttgart and Vilseck cross the Alps and Naples heads north for two days of crucial large-school soccer, baseball and softball action.

The inter-country competition between Germany and Italy, which began in earnest last season when Vicenza and Naples were elevated to Division I status, is reason enough to circle this weekend’s events on the calendar. But the matchups created are compelling on their own merits.

In soccer, the weekend is of particular significance to Naples.

While the German Division I schools have spent their spring locked in a version of The Hunger Games, the Wildcats have spent their spring simply feasting. The two Naples teams are a combined 8-0 on the season, with a stunning total of 45 goals scored versus just two allowed. The Wildcats’ games aren’t likely to be that lopsided this weekend, particularly against Stuttgart. The Panther girls are the defending Division I European champions, and they’ve smashed divisional rivals Kaiserslautern and Wiesbaden while playing annual championship-game foe Ramstein to a stalemate.

The Stuttgart boys are nearly matching that torrid pace, having blanked defending boys champ Ramstein and doubled up Kaiserslautern 4-2 before briefly faltering in a 1-0 loss to Wiesbaden last weekend.

BFA, meanwhile, is the team to beat in the Division II soccer gathering. Both Falcon squads are a perfect 3-0 on the year, presenting a tantalizing target for AOSR and host Aviano.

The diamonds hold similar intrigue in both locations. In the Division II/III ranks, Sigonella has played well above its humble school size this spring. The Jaguars have scored wins over all three of their larger Italian rivals - Aviano, Naples and Vicenza - in both softball and baseball this spring, though they’ve also taken their losses in other games with those teams.

At Vicenza, Stuttgart will look to firm up its Division I baseball stature after dropping its season-opening series to rising contender Wiesbaden. The Panthers have rattled off four straight wins since those early losses. Naples, meanwhile, saw its season-opening win streak halted at five last Saturday against Sigonella.

The Division I softball scene, meanwhile, is in need of the kind of clarity that this weekend’s fresh action should provide. All four involved teams come into the event carrying at least two overall losses.