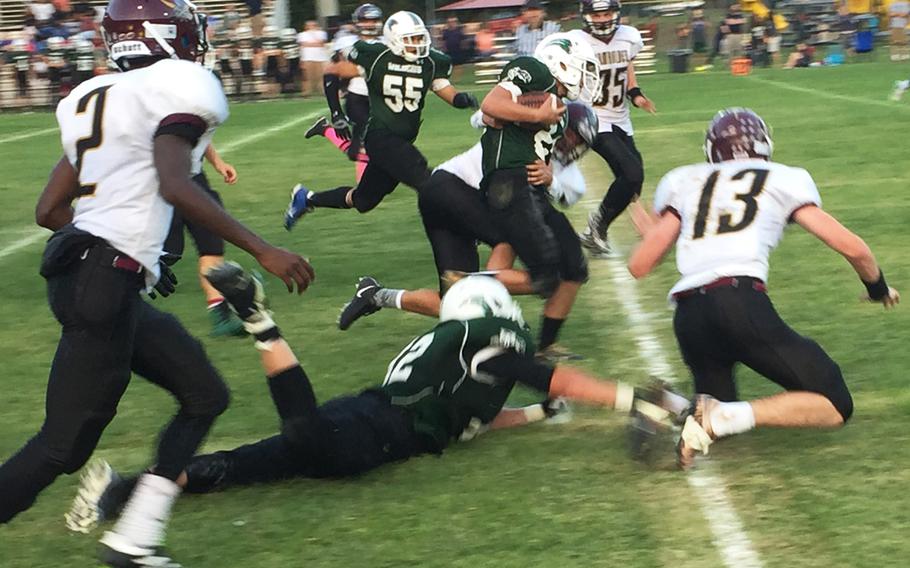 The Naples Wildcats push through the Buccaneers' stout defense on a touchdown-scoring drive Friday Sept. 15, 2017 at Carney Park in Pozzuoli, Italy. (Scott Wyland/Stars and Stripes)

The Naples Wildcats push through the Buccaneers' stout defense on a touchdown-scoring drive Friday Sept. 15, 2017 at Carney Park in Pozzuoli, Italy. (Scott Wyland/Stars and Stripes) 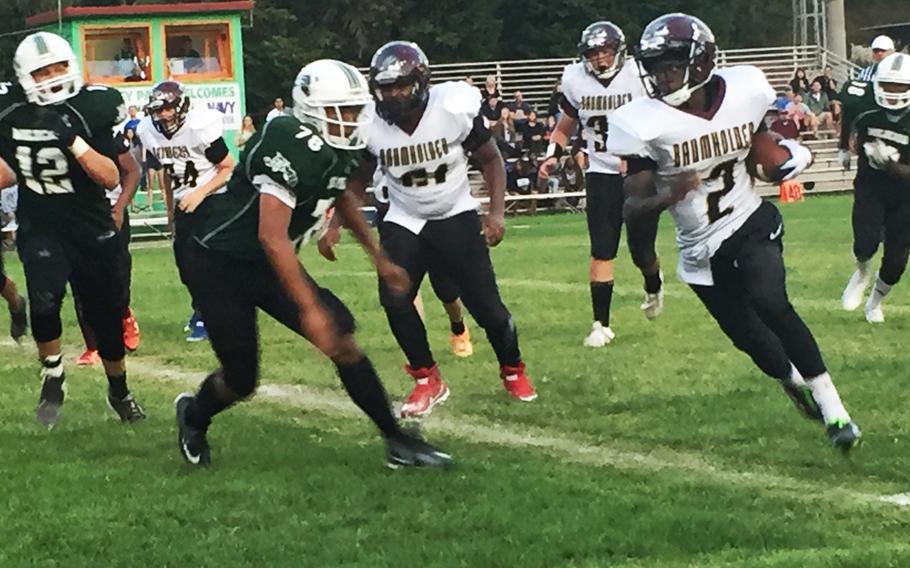 Buccaneers quarterback Nate Horton runs the ball on an offensive drive that resulted in a toujchdown against the Wildcats Friday Sept. 15, 2017 at Carney Park near Naples, Italy. The scrappy game had several momentum swings but the Wildcats won in the final minutes. (Scott Wyland/Stars and Stripes) 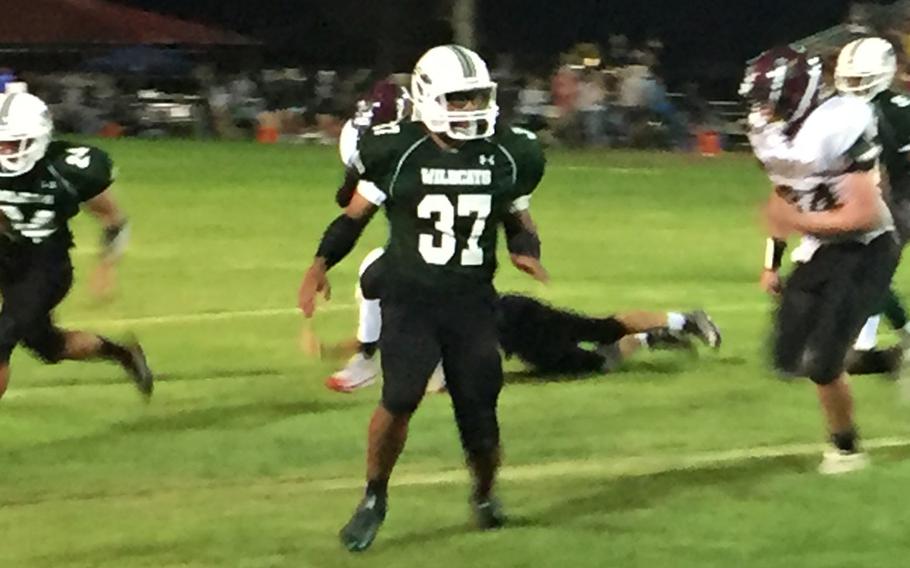 POZZUOLI, Italy – The Naples Wildcats came from 12 points down in the fourth quarter Friday night to beat the Baumholder Buccaneers in a hard-hitting matchup fraught with injuries and penalties.

Wildcats senior quarterback Jackson Blivin had a stellar performance, running 210 yards for three touchdowns, including a clutch score late in the fourth quarter to clinch the game for Naples in the 26-20 victory.

The come-from-behind win was even sweeter for the Wildcats after losing 26-0 last week to the Rota Admirals.

“Talk about a dogfight,” Wildcats coach Jim Davis said. “It came down to who had the ball last.”

Davis said he was glad to see his players show an aggressive fighting spirit that they lacked in the loss against Rota. Blivin deserves much of the credit, he said, calling him “a phenomenal athlete.”

Davis gave the Bucs kudos for playing as hard and well as they did. The team has only 18 players and had a long bus ride from Germany. Quarterback Nate Horton was impressive, he said.

“They have nothing to be ashamed of,” Davis said.

The Bucs looked to be wearing down the Wildcats early in the fourth quarter, pulling ahead 20-8. The Wildcats then scored three unanswered touchdowns.

The Buccaneers were bedeviled by several turnovers, including a late-game interception and fumble that killed their chances to put away the Wildcats. The team’s slim roster also worked against them when players suffered injuries that didn’t sideline them but appeared to diminish their play.

Penalty flags flew often in this scrappy matchup. A brief scuffle ensued in the third quarter as tempers flared.

Blivin said his teammates did a good job blocking tough Buccaneer defenders. He had doubts about whether the team could overcome a 20-8 deficit, and then things went their way, he said.

He and the coaches decided he would run the ball more after struggling with his passing game against Rota, Blivin said.

The Wildcats’ first home game of the season was dubbed the “Carney Bowl” because it was played at Carney Park, a military sports complex outside Naples.

The Washington Redskins cheerleaders did a halftime show as part of a three-country military tour during the team’s bye week. Country singer Natalie Stovall performed after the game.

The festivities added a celebratory feel to Naples’ victory.