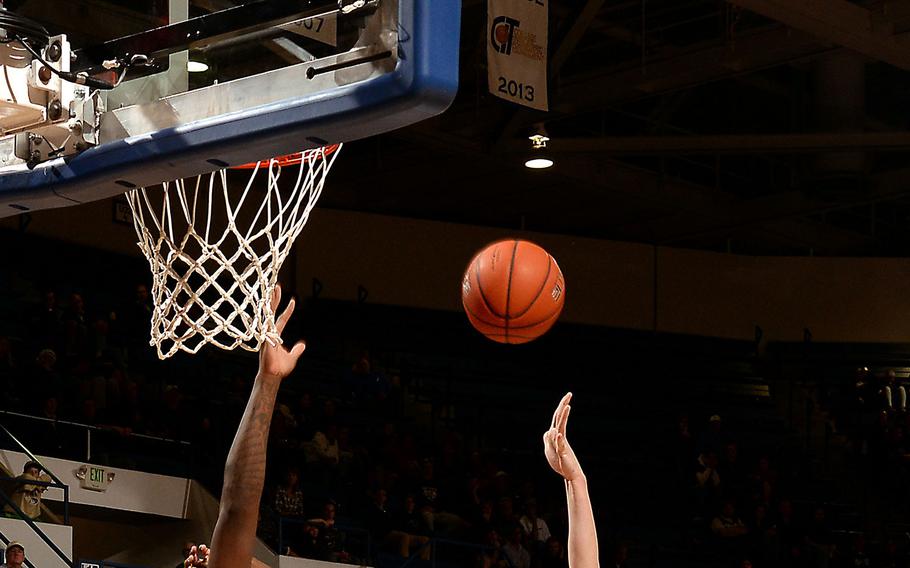 Lakenheath’s Kobe Cox poured in a combined 29 points over the two games.

Kaiserslautern has dropped two of its last three divisional games, including a pre-holiday defeat against Wiesbaden, after starting the season with three straight wins.

Lakenheath’s Saturday win snapped a three-game losing streak that included a doubleheader sweep at the hands of Ramstein in December.

Rota had three double-digit scorers in the game also, led by a game-high 13 by Lavanta Chester.

BFA seized control of Saturday’s rematch and never relinquished it. Kaden Proctor posted 14 points and five rebounds in the win.

Baumholder 44/61, Hohenfels 42/32: At Baumholder, the host Bucs followed a narrow Friday win with a Saturday blowout of the Tigers.

The Bucs earned a two-point comeback win Friday, outscoring the Tigers 14-7 in the final quarter after Hohenfels launched a 19-5 run in the third.

Horton went off for 27 points and 11 rebounds in Saturday’s runaway win. The Bucs defense forced 29 turnovers to subdue the Tiger offense.

Naser Eaves was again the standout for the Royals, posting 24 points and 10 rebounds a day after producing a game-high 21 points. Jason Jones Jr. turned in an impressive 18-point, 16-rebound double-double to aid the Ramstein cause.

The Royals have now won four straight Division I games after dropping their first two to Wiesbaden and Kaiserslautern.

Mason Shine totaled 36 points, including 23 in the opener, to fuel the potent Aviano offense. The substantial margin of victory allowed Aviano to provide all 15 of its players court time, coach Kevin Lehde said.

Brussels 30, Sigonella 19: Friday at Brussels, the Brigands opened the four-team Division III meet they hosted by knocking off the reigning European champions.

Brussels outscored the Jaguars 23-10 after halftime to secure the signature victory. Shahzod Niyazov scored a game-high 17 points to lead the way to the win.

Naples 67/70, American Overseas School of Rome 59/74: At Rome, the host Falcons played the Wildcats to an impressive Friday-Saturday split.

Division I Naples took the upper hand Friday behind a 26-point, 18-rebound, six-block effort from Tye Thompson. The Wildcats started strong with a 13-8 advantage through one quarter and finished strong as well, outscoring the Falcons by seven points over the final eight minutes.

Division II AOSR proved resilient Saturday, however, overcoming an eight-point halftime deficit to earn the split. Brando Monetti scored a game-high 30 points to lead the Falcons to a signature win.